Approaches to the Study of Political Science

An approach is the way of looking at a political phenomenon and then explaining it.

Approaches to the Study of Political Science 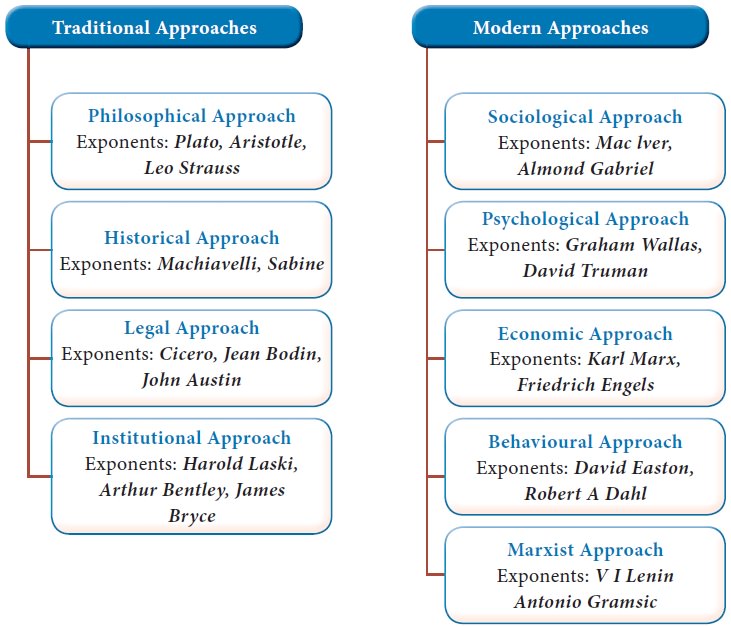 It is the oldest approach to the study of politics. It is also known as speculative, metaphysical or ethical approach. The study of state, government and the political behaviour of man is intricately linked with the quest for achieving certain goals, morals or truths. Here, the discipline moves closer to the world of ethics. The approach is criticized for being highly speculative and abstract.

This approach throws light on the past and traces the origin and development of the political institutions. It seeks to study the role of individuals and their motives, accomplishments and failures in the past and its implications for the future. In understanding the political issues of today, the help of historical parallels are sought. However, critics argue that historical parallels can be illuminating, but at the same time they can also be misleading as it is loaded with superficial resemblances.

The study of politics is linked with the study of legal institutions created by the State for the maintenance of the political organization. As the State is engaged in the maintenance of law and order, the study of judicial institutions become the concern of political theorists. This approach looks at the State as an organization primarily concerned with the creation and enforcement of law. However, critics argue that this approach has a narrow perspective. The State has various other functions to perform other than enforcement of law and order. Laws deal with only one aspect of an individual’s life and do not enable the complete understanding of his political behaviour.

This approach emphasizes on the understanding of the social context to explain the political behaviour of the members of the community. The state is considered primarily as a social organism and politics is understood through the sociological factors. But critics are of the opinion that too much of emphasis on the social context can affect the very autonomy of the discipline.

This approach is basically different from the other modern approaches. It perceives State as an inevitable consequence of class contradictions. It assumes that there is a continuous interaction between the political and economic forces and separating one from the other is not possible. However, this approach gives undue importance to the economic factors and ignores the other important factors.

After careful analysis of the approaches, it is understood that each approach has its own relevance in the study of political phenomenon and also suffer from certain limitations. 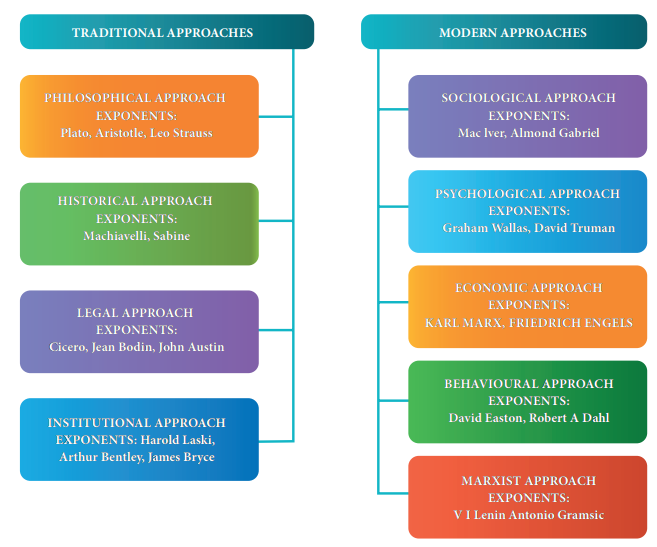 III. Relationship with other Social Sciences

i. Political Science and History

Psychology deals with all the aspects of human behaviour while Political Science deals only with the political behaviour of humans. Psychology throws light on why individuals and groups behave in a certain manner. It aids Political Science in understanding the behaviour of political parties and varied other groups in the state. Barker rightly says, ‘The application of psychological clue to the riddles of human activity has indeed become the fashion of the day. If our forefathers thought biologically, we think psychologically’.

Thus, we understand that Political Science is the systematic study of governance by the application of empirical and scientific methods of analysis. Though it involves empirical investigations, it does not generally produce precise predictions. Political Science examines the state and its organs and institutions. It also encompasses the study of societal, cultural, economic and psychological factors that influence the government. It borrows heavily from the other social sciences but its focus on power differentiates it from the other disciplines. Apart from power, Political Science also focuses on comparative politics, international relations, political theory, public law and public policy. Most importantly, the study of Political Science gives us the basic understanding of the political process, the system of government and the way in which it affects the life of every citizen.

Write a short note on how politics affects your daily life.

Collect pictures on the life and works of your favorite political thinker and explain to the class about his contributions to the discipline.