In this section, we consider how and where group technology is applied, and we report on the results of a survey of industry about cellular manufacturing in the United States .

In this section, we consider how and where group technology is applied, and we report on the results of a survey of industry about cellular manufacturing in the United States [38]

In our introduction to this chapter, we defined group technology as a "manufacturing philosophy." GT is not a particular technique, although various tools and techniques, such as parts classification and coding and production flow analysis, have been developed to help implement it. The group technology philosophy can be applied in a number of areas, Our discussion focuses on the two main areas of manufacturing and product design.

Informal scheduling and routing of similar parts through selected machines. This approach achieves setup advantages. but no formal part families are defined, and no physical rearrangement of equipment is undertaken.

Formal machine cells. This is the conventional GT approach in which a group of dissimilar machines are physically relocated into a cell that is dedicated to the production of one or a limited set of parts families (Section 15.4.2). The machines in a formal machine cell are located in close proximity to minimize part handling, throughput name. setup time, and work-in-process.

In the ideal, all members of the same part family require similar setups, tooling, and fixturing. This generally results in a reduction in the amount of tooling and fixturing needed Instead of determining a special tool kit for each part, a tool kit is developed for each part family. The concept of a modular fixture can often be exploited, in which a common base fixture is designed and adaptations are made to switch between different parts in the family

A similar approach can be applied in NC part programming. Called parametric programming. [28], it involves the preparation of a common NC program that covers the entire part family. The program is then adapted for individual members of the family by inserting dimensions and other parameters applicable to the particular part. Parametric programming reduces both programming time and setup time.

Other design applications of group technology involve simplification and standardization of design parameters, such as tolerances inside radii on corners, chamfer sizes on outside edges, hole sizes, thread sizes, and so forth. These measures simplify design procedures and reduce part proliferation. Design standardization also pays dividends in manufacturing by reducing the required number of distinct lathe tool nose radii, drill sizes, and fastener sizes. There is also a benefit in terms of reducing the amount of data and information that the company must deal with. Fewer part designs, design attributes, tools, fasteners, and so on mean fewer and simpler design documents, process plans, and other data records.

A number of surveys have been conducted to learn how industry implements cellular manufacturing [24], [36], [38J. The surveyed companies represent manufacturing industries, such as machinery, machine tools, agricultural and construction equipment, medical equip

Companies  in the survey were asked to report  their reasons  for establishing  machine cells and the benefits  they enjoyed  from  implementing   cellular  manufacturing   in the operations. Results are listed in Table 15.7. The reasons are listed in the relative order of importance as indicated by the companies participating in the survey. We also list the average percentage improvement reported by the companies, rounded to the nearest whole percentage point. Reasons 6, 8, and 9 are difficult to evaluate quantitatively, and no percentage improvements are listed in these cases.

One of the questions considered in the 1989 survey [36] was: What are the approaches used by companies to form machine cells?  The results are listed in Table 15.8. The most common approach consisted of visually grouping similar parts with no consideration given to existing routing information and no parts classification and coding. The use of a part-machine incidence matrix was not widely reported, perhaps because the formal algorithms for reducing this matrix, such as rank order clustering (Section 15.6.1) were not widely known at the time of the survey

Companies also reported costs associated with implementing cellular manufacturing. The reported cost categories are listed in Table 15.9 together with the number of companies reporting the cost. No numerical estimates of actual costs are provided in the report. 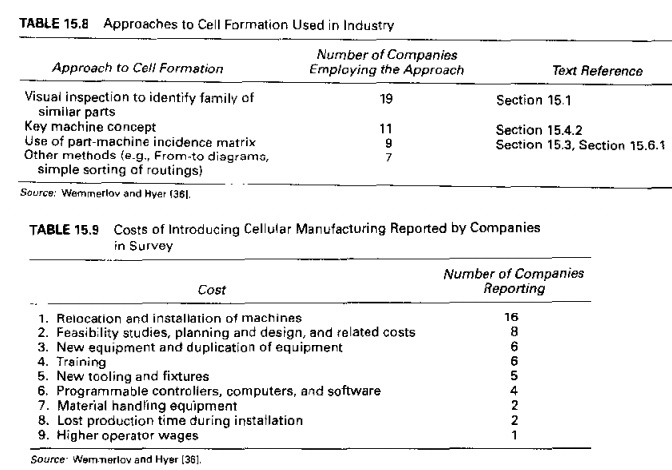 Topping the list was the expense of equipment relocation and installation. Most of the companies responding to the survey had implemented cellular manufacturing by moving equipment in the factory rather than by installing new equipment to form the cell.