A General Approach to Using Medication with Anxious Patients

In the last decade, there has been a substantial increase in the number of medications demonstrated to be effective for the treat-ment of anxiety and anxiety disorders (Table 80.1). 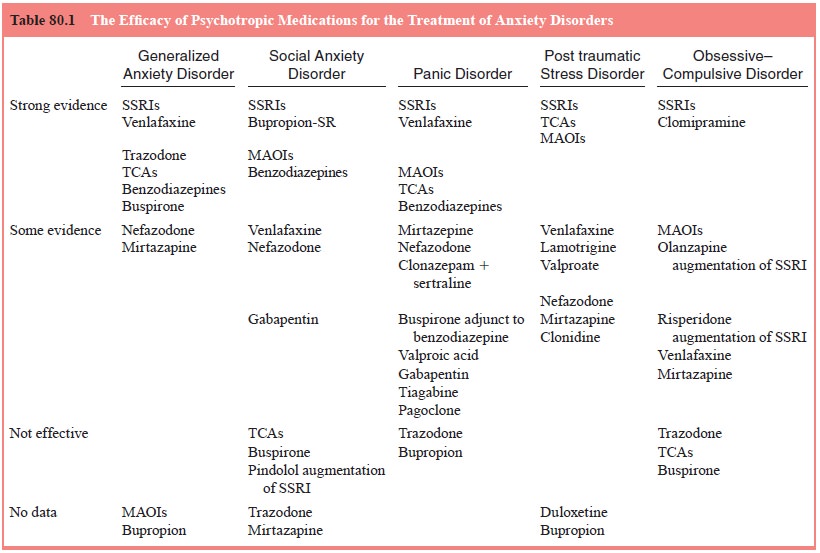 There was a cascade of anxiolytic research in the 1990s. The selective serotonin reuptake inhibitors (SSRIs) as a class were demonstrated to be efficacious treatments for most of the anxiety disorders described in the DSM-IV-TR. Although these agents have a delayed onset when contrasted with the benzodiazepines, they have a broader spectrum of action, no problems with depen-dence, and much less of a problem with withdrawal syndromes. The 1990s also saw the approval of venlafaxine as a treatment for generalized anxiety disorder.

A General Approach to Using Medication with Anxious Patients

Making an appropriate differential diagnosis which includes a DSMIV-TR anxiety disorder is critical to the success of any psychopharmacological intervention. The diagnosis dictates the class of medication to be used and the length of pharmacother-apy. An important rule in general is “to start low and go slow” when initiating pharmacological treatment for patients with anxiety disorders. Interestingly, although treating patients with anxiety disorders frequently requires a more gradual initial titra-tion schedule, patients frequently attain maintenance dosages of antidepressant medications that are greater than the dosage com-monly used to treat major depressive disorder.

It has been known that medications initially identified because of their antidepressant properties are frequently effective treat-ments for anxiety disorders as well. The basic action of the majority of the antidepressants is to increase the availability of neurotransmitters in the synaptic cleft. These agents have the broadest spectrum of activity which spans the entire spectrum of DSM-IV-TR anxiety disorders. The relative differences in terms of major pharmacokinetic and pharmacodynamic properties are outlined in Tables 80.2 and 80.4. As illustrated in Table 80.1, a variety of serotonin receptor subtypes have been implicated in the modulation of anxiety disorders, depressive disorders, mi-graine, pain and neuropsychiatric disorders. 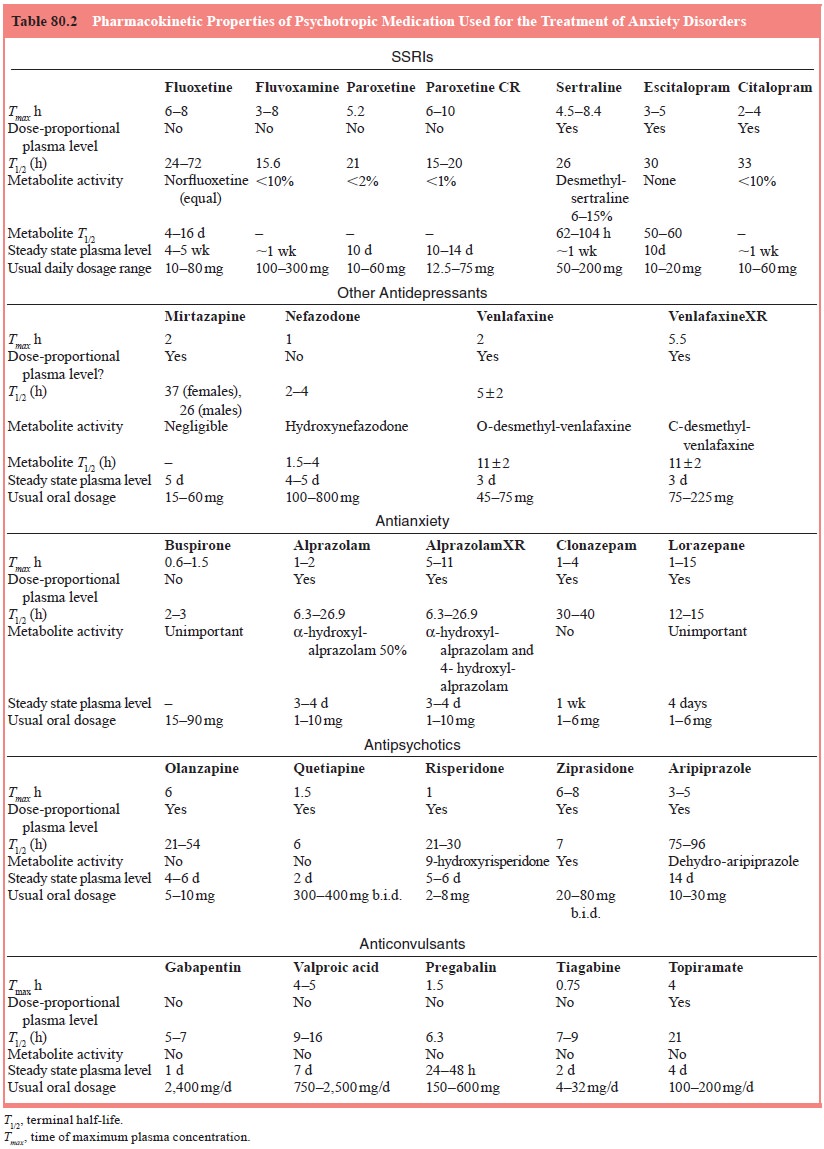 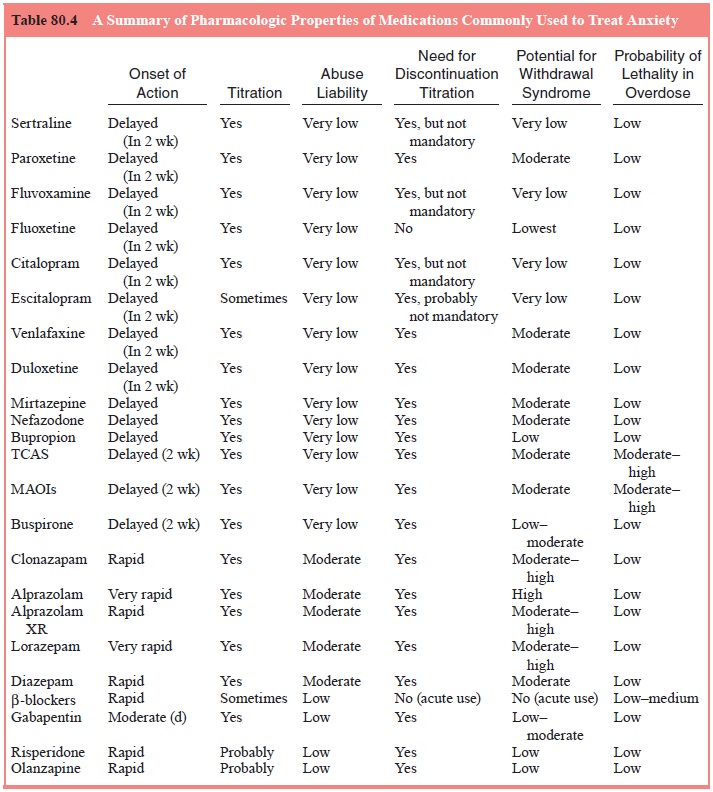 Initial data from randomized, placebo-controlled treatment trials suggest that SSRIs may be useful in the treatment of adults and children with generalized anxiety disorder. SSRIs have emerged as a first-line treatment for social anxiety disorder. Most of the efficacy data are derived from multicenter, double-blind trials of paroxetine, sertraline and fluvoxamine.

In addition, SSRIs are generally accepted as a first-line treat-ment for panic disorder. The major advantage of these agents is their tolerability and thus longer-term acceptance by patients. There is evidence that fluoxetine, sertraline, paroxetine, fluvoxamine and citalopram are effective in the acute treatment of panic disorder.

One of the advantages of SSRIs is that they tend to be fairly well tolerated in contrast to some of the other treatments available for panic disorder. Although a few individuals may have some initial problems with restlessness and increased anxiety, data suggest that starting at lower doses such as 25 mg/day of sertraline or 10 mg/day of paroxetine may decrease the risk of antidepressant “jitteriness”.

There have been open-label and double-blind, placebo-controlled studies demonstrating that SSRIs are effective for the treatment of post traumatic stress disorder (PTSD). Open-label trials with all of the SSRIs currently available suggest that each may be effective in decreasing the core symptoms of PTSD.

There have been a number of placebo-controlled multicentered studies demonstrating that venlafaxine XR is an effective treat-ment of GAD.

Doses as low as 37.5 mg/day and as high as 225 mg/day are effective in decreasing symptoms of anxiety for patients with GAD. Side effects appear to be mild and tend to decrease in num-ber and intensity over the course of treatment. Nausea, dry mouth and somnolence are the most commonly repeated side effects.

Case reports and open-label studies have been published for use of venlafaxine in social anxiety disorder (Kelsey, 1995).

There is only one double-blind, placebo-controlled study by Pollack and coworkers. (1996) suggesting that venlafaxine may be an effective treatment for patients with panic disorder.

A variety of tricyclic antidepressants (TCAs) have been dem-onstrated to be effective treatments for GAD. However, the side effects and difficulty titrating the dosage of these medications have made their use uncommon.

In general, TCAs have not been found to be effective for the treatment of social anxiety disorder, but there is evidence of effectiveness in panic disorder. Although surpassed by the SSRIs as first-line agents, there is no doubt that first-generation MAOIs are effective. Unfortunately, the risk of hypertensive crisis and the need for patients to follow a tyramine-free diet makes this class of drugs unappealing for the majority of patients.

Although TCAs have been widely used for the treatment of panic disorder, their side-effect profile and slow time to onset of action makes them a difficult class of medication for many patients to tolerate.

The benzodiazepines as a class work by increasing the relative efficiency of the gamma-aminobutyric acid (GABA) receptor when stimulated by GABA. The benzodiazepines bind to a site located adjacent to the GABA receptor and cause an allosteric change to the receptor that facilitates the increased passage of the chloride ions intracellularly when GABA interacts with the receptor complex. This leads to a relative hyperpolarization of the neuronal membrane and inhibition of activity in the brain. The benzodiazepines as a group have different affinities for GABA receptors, in fact some agents bind to only one of the two types of GABA receptors. The relative pharmacodynamic and pharmacokinetic properties of the benzodiazepines are fur-ther outlined in comparison to the other medications in Table 80.2. As a class, benzodiazepines are efficacious for the treat-ment of panic disorder, social anxiety disorder, generalized anxiety disorder, alcohol withdrawal and situational anxiety. The choice of an agent should take into account the age, medical health and comorbid diagnosis of the patient. Although obses-sive–compulsive disorder falls within the taxonomy of anxiety disorders, benzodiazepines do not seem to be particularly effec-tive in treating these patients.

The limitations to these drugs are the same as when used in any indication. Due to the potential for abuse and drug with-drawal, their use must be monitored carefully. This is a particu-larly problematic issue in social anxiety disorder because of the high rate of comorbid substance abuse. Benzodiazepines may be best suited for patients with situational and performance anxiety on an as-needed basis.

The two high potency benzodiazepines that have been approved by the FDA, alprazolam and clonazepam are widely used in the treatment of panic disorder. They may also be help-ful as adjuncts in the treatment of obsessive-compulsive disorder, though not as first-line stand alone treatments.

Buspirone is a member of the group of agents called azaspi-rodecanediones. It is believed to exert its anxiolytic effect by acting as a partial agonist at the 5-HT1A autoreceptor. Stimu-lation of the 5-HT1A autoreceptor causes decrease release of serotonin into the synaptic cleft. However, buspirone also exerts another effect through its active metabolite 1-phenyl-piperazine (1-PP) that acts on alpha-2-adrenergic receptors to increase the firing rate of the locus coeruleus. Some not yet well-characterized combination of these effects may be responsible for anxiolytic effect of buspirone. It usually takes approximately 4 weeks for the benefit of buspirone therapy to be noticed in patients with GAD. It may also be a useful adjuvant in some patients with treatment resistant panic disor-der. One major advantage of buspirone is that it does not cross react with benzodiazepines. The most common side effects associated with buspirone include dizziness, gastrointestinal distress, headache, numbness and tingling. The most common pharmacokinetic and pharmacodynamic actions of buspirone are described in Table 80.3. 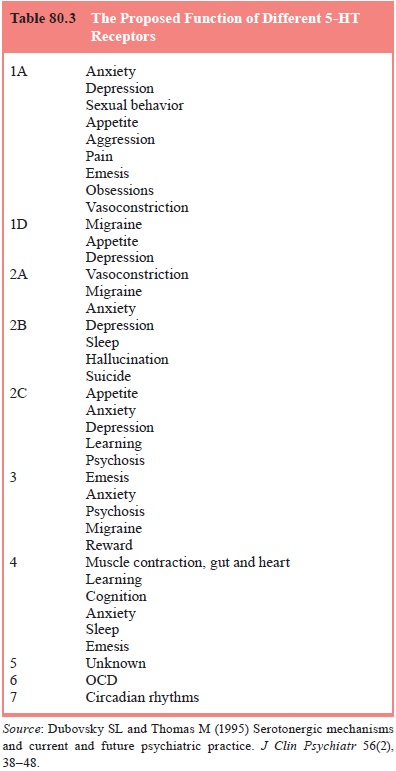 Beta-adrenergic blockers competitively antagonize norepi-nephrine and epinephrine at the beta-adrenergic receptor. It is thought that the majority of positive effects of beta-blockers are due to their peripheral actions. Beta-blockers can decrease many of the peripheral manifestations of anxiety such as tachy-cardia, diaphoresis, trembling and blushing. The advent of more selective beta-blockers that only block the beta-2-adren-ergic receptor has been beneficial since blockade of beta-1 ad-renergic receptors can be associated with bronchospasm. Beta-blockers may be useful for individuals who have situational anxiety or performance anxiety. They generally have not been effective in treating anxiety disorders such as generalized so-cial anxiety disorder, panic disorder, or obsessive–compulsive disorder.

One of the areas of increasing research is the study of an-ticonvulsants in anxiety disorders. Currently, there are few published placebo-controlled studies investigating the effi-cacy of commonly used anticonvulsants for the treatment of anxiety or anxiety disorders. There is one published report of a large double-blind, placebo-controlled study of gabap-entin for the treatment of social anxiety disorder. The precise mechanism of action of gabapentin is not fully appreciated, however, it is thought gabapentin somehow increases brain GABA levels.