1. Classify the various types of Acids based on their sources.

Answer: The acids are classified based on their sources and organic and inorganic acids. Organic acids - acids present in plants and animals.

2. Write any four uses of acids.

(i) Sulphuric acid is called King of Chemicals because it is used in the preparation of many other compounds. It is used in car batteries also.

(ii) Hydrochloric acid is used as a cleansing agent in toilets.

(iii) Citric acid is used in the preparation of effervescent salts and as a food preservative.

(iv) Nitric acid is used in the manufacture of fertilizers, dyes, paints and drugs.

(v) Oxalic acid is used to clean iron and manganese deposits from quartz crystals. It is also used as bleach for wood and removing black stains.

(vii) Tartaric acid is a constituent of baking powder.

3. Give the significance of pH of soil in agriculture.

4. What are the various uses of Aquaregia.

Answer: (i) It is used chiefly to dissolve metals such as gold and platinum.

(ii) It is used for cleaning and refining gold.

5. What are the uses of Plaster of Paris?

Answer: (i) It is used for plastering bones.

(ii) It is used for making casts for statues.

(ii) Which acid is called the King of Chemicals?

Answer: It is the mixture of hydrochloric acid and nitric acid prepared optimally in a molar ratio of 3:1.

(a) Washing soda is used for making cakes and bread soft, spongy.

(b) Calcium sulphate hemihydrate is used in textile industry for bleaching cloths.

9. What is neutralization reaction? Give an example.

Answer: Neutralization reaction is a reaction in which an acid reacts with a base to form salt and water and H+ ion and OH− ion combines to generate water. The neutralization of a strong acid and strong base has a pH equal 7.

1. Hydrons is a term used to explain a substance that contains water as a constituent.

3. These are known as hydrates

4. Hydroscopic compounds can form hydrous compounds by absorption of water from the air

1. Anhydrous is a term used to explain a substance that does not contain water as a constituent.

2. Not composed of water molecules.

4. Anhydrous compounds can absorb water from the air.

2. Give the tests to identify Acids and Bases.

3. Write any four uses of bases.

(i) Sodium hydroxide is used in the manufacture of soap.

(ii) Calcium hydroxide is used in white washing of building.

(iii) Magnesium hydroxide is used as a medicine for stomach disorder.

(iv)Ammonium hydroxide is used to remove grease stains from cloth.

4. Write any five uses of salts.

It is used in our daily food and used as a preservative.

(i) It is used in softening hard water.

(ii) It is used in glass, soap and paper industries.

(i) It is used in making of baking powder which is a mixture of baking soda and tartaric acid.

(ii) It is used in soda-acid fire extinguishers.

(iii) Baking powder is used to make cakes and bread, soft and spongy.

(iv) It neutralizes excess acid in the stomach and provides relief.

(i) It is used as disinfectant.

(ii) It is used in textile industry for bleaching cotton and linen.

(i) It is used for plastering bones

(ii) It is used for making casts for statues.

5. Sulphuric acid is called King of Chemicals. Why is it called so?

Answer: Sulphuric acid is called King of Chemicals because it is used in the preparation of many other compounds.

Take solutions of hydrochloric acid or sulphuric acid. Fix two nails on a cork and place the cork in a 100 ml beaker. Connect the nails to the two terminals of a 6V battery through a bulb and a switch as shown in Figure. Now pour some dilute HCl in the beaker and switch on the current. Repeat the activity with dilute sulphuric acid, glucose and alcohol solutions. What do you observe now? Does the bulb glow in all cases? 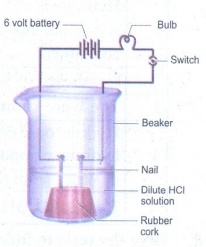 Answer: (i) The bulb glows when sulphuric acid and hydrochloric acid are used.

(ii) The bulb does not glow when the activity is done with alcohol and glucose solution.

Collect the following samples from the science laboratory — Hydrochloric acid, Sulphuric acid and Nitric acid, Sodium hydroxide, Potassium hydroxide. Take 2 ml of each solution in a test tube and test with a litmus paper and indicators phenolphthalein and Methyl orange. Tabulate your observations.

Fill in the blanks in the following table based on the concept of water of crystallisation. 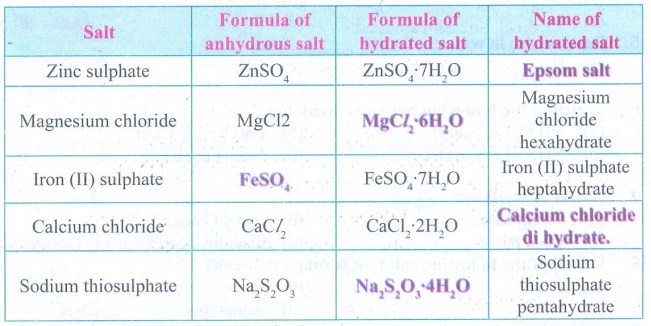 Boil about 100 ml of ground water in a vessel to dryness. After all the water get evaporated observe the inner wall of the vessel. Can you observe any deposits? This is the deposit of dissolved salts present in water.

Answer: This is the deposit of dissolved salts present in water.