A. Identify the character or speaker of the following lines. B. Based on your understanding of the story, choose the right answers from the given options. C. Answer the following questions in a paragraph of about 80 to 100 words. D. Refer to what happens in the folktale and complete the story with the help of the hints given in the mind map.

A. Identify the character or speaker of the following lines.

1. They gathered the treasure. - The honest couple

2. The pine tree under which I am buried, to be cut down and made into a mortar. - The (dead) dog

3. They dug, and found nothing but a quantity of dirt and nasty offal. - The wicked couple

4. He had not to wait long before he was called into the prince's palace, and ordered to exhibit his power. - The wicked old man

B. Based on your understanding of the story, choose the right answers from the given options.

1. The old farmer and his wife loved the dog

a. because it helped them in their day-to-day work.

b. as if it was their own baby.

c. as they were kind to all living beings.

2. When the old couple became rich, they

a. gave the dog better food.

b. invited their greedy neighbours to a feast.

c. lived a comfortable life and were generous towards their poor neighbours.

3. The greedy couple borrowed the mortar to make

a. rich pastry and bean sauce.

b. magic ash to win rewards.

C. Answer the following questions in a paragraph of about 80 to 100 words.

1. The old farmer was a kind person. Justify the statement with suitable examples from the story.

Once there lived an old farmer in a village. He was an honest man, The farmer and his wife used to work in their fields. He used to help the poor and needy, Their neighbours were an old couple. They were not good people. They were jealous of this old farmer and his wife. They borrowed whatever they wanted from the farmer. The farmer was never getting cross with the neighbour. The neighbours suffered a lot for their daily food, The farmer gave them a share from his wealth to meet their needs. He tried to change their attitude by helping them in all ways. They understood the kindness of the old farmer. The neighbours became very happy and thanked the old farmer. They all lived in harmony and peace.

2. How did the dog help the farmer even after its death?

The good old man's neighbour killed the dog and buried it under the roots of a pine-tree. The old man adorned its grave with flowers and shed tears over his lost pet. That night the dog appeared to him. It asked him to make a mortar from the pine tree wood and use it. When he ground his rice, it turned into rich treasure. The neighbour borrowed the mortar. They tried to use it but all their rice turned into filth. So they broke the mortar and burnt it.

One night the dog appeared to the good old man and told him that if he took the ashes and sprinkle them on withered trees, the trees would revive and blossom. He verified the power to bring back dead trees to life. A certain prince sent for him, he sprinkled the ashes on the plum and cherry trees. The trees shoot out and put forth flowers. So the prince gave him a rich reward and sent him rejoicing. Thus the dog helped the good old man even after its death.

3. Why did the Prince reward the farmer but punish the neighbour for the same act?

A certain prince hearing of the power of the ashes, sent for the good old man. He sprinkled the ashes on the withered plum and cherry trees. The trees began to shoot out and blossom. So, the Prince gave him a rich reward of pieces of silk and cloth and other presents. The wicked old man also entered the Prince's place to show his power of reviving dead trees. The Prince ordered him to exhibit his power. When he climbed up into a withered tree and scattered the ashes, not a bud or flower appeared. All the ashes flew into the Prince's eyes and mouth, blinding and choking him. When the retainers saw this they seized the old man and beat him almost to death. He and his wife found out that they had fallen into a trap. They scolded themselves for their act of greed.

4. Bring out the difference between the two neighbours with suitable examples to support your view.

The two neighbours in the story are of opposite characters. One old man was honest and kind. The other old man was cruel and wicked. He borrowed the dog to use it and became rich. But it did not come true. So he killed it and burnt it. The dog's ashes had the power to revive dead trees. The cruel old man wanted to use it to become rich. But he failed and he was beaten almost to death by the Prince's retainers. They are similar to the two women who came to king Solomon's court. Both the women claimed to be the mother of a living child. The king ordered the servant to cut it into two with a sword. The false mother opted to take one half of the baby. But the true mother requested the king not to cut and kill the baby. She asked the king to give the baby to the other woman. The king caught the wicked woman. The child was restored to the real mother. The wicked woman was punished by the king.

D. Refer to what happens in the folktale and complete the story with the help of the hints given in the mind map. 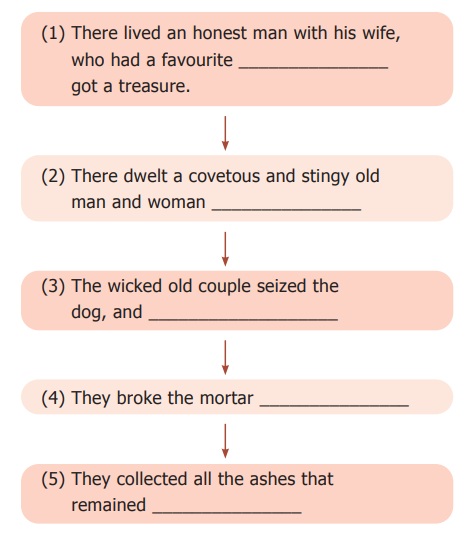 1. There lived an honest man with his wife, who had a favourite dog through which he got a treasure.

2. There dwelt a covetous and stingy old man and woman in the neighbouring house

3. The wicked old couple seized the dog, and they killed him

4. They broke up the mortar and burnt it

5. They collected all the ashes that remained and put them in a basket.

E. Rearrange the following sentence in a coherent order.

2. They went out to work in their garden.

3. They found pieces of gold and other precious things.

a. An old couple had a pet dog.

b. They went out to work in their garden.

e. They found pieces of gold and other precious things.

2. The dog appeared to the old man again.

3. He too demonstrated his power. But he failed.

4. It asked him to scatter the ashes on the withered trees.

5. The withered trees and a cherry tree began to blossom.

a. The dog appeared to the old man again.

b. It asked him to scatter the ashes on the withered trees.

c. The withered trees and a cherry tree began to blossom.

e. He too demonstrated his power. But he failed.

F. Write a Paragraph of about 150 words developing the following hints.

An old couple loved their dog. They looked after it as their child. One day the dog dug in the garden. They found a box of treasure there. The next door neighbour came to know about this. They thought the dog must be able to find treasure and so they borrowed the dog from the old couple. They made the dog to dug the garden. There was only filth. They got angry and killed the dog. When the couple asked he said that the dog dropped dead. The old couple grieved and buried the dog under the pine tree where they had found the treasure. One night the old man had a dream. He was asked to chop the pine tree and make a mortar from it. The old man did, the rice put into the mortar turned into gold. Knowing this the neighbour borrowed it. But the rice turned to foul, smelling berries. They got angry and burnt the mortar. Again the old man had a dream. The dog told his master to take the ashes and sprinkle them on certain cherry trees. When he did it the cherry trees came into bloom. The prince got happy and gave him many gifts. The neighbour tried to do the same. The ashes blew into the prince's eyes and finally they were thrashed by the prince.