Myasthenia gravis is an autoimmune disorder char-acterized by weakness and easy fatigability of skele-tal muscle.

Myasthenia gravis is an autoimmune disorder char-acterized by weakness and easy fatigability of skele-tal muscle. It is classified according to disease distribution and severity ( Table 35–1). The preva-lence is estimated at 50–200 per million population. The incidence is highest in women during their third decade, and men exhibit two peaks, one in the third decade and another in the sixth decade.Weakness associated with myasthenia gravis is due to autoimmune destruction or inactivationof postsynaptic acetylcholine receptors at the neuro-muscular junction, leading to reduced numbers of receptors and degradation of their function, and to complement-mediated damage to the postsynap-tic end plate. IgG antibodies against the nicotinic acetylcholine receptor in neuromuscular junctions are found in 85–90% of patients with generalized myasthenia gravis and up to 50–70% of patients with ocular myasthenia. Among patients with myas-thenia, 10–15% percent develop thymoma, whereas approximately 70% exhibit histologic evidence of thymic lymphoid follicular hyperplasia. Other autoimmune-related disorders (hypothyroidism, hyperthyroidism, rheumatoid arthritis, and sys-temic lupus erythematosus) are also present in up to 10% of patients. The differential diagnosis of myas-thenia gravis includes a number of other clinical conditions that may mimic its signs and symptoms 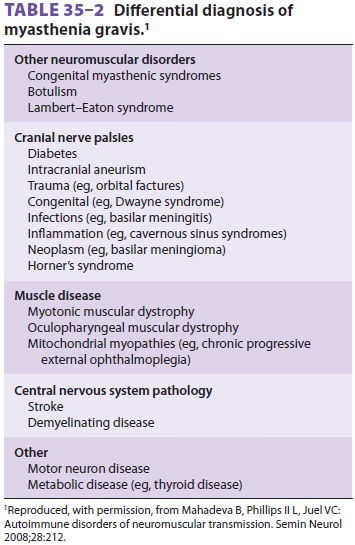 (Table 35–2). Myasthenia gravis crisis is an exacer-bation requiring mechanical ventilation and should be suspected in any patient with respiratory failure of unclear etiology.

The course of myasthenia gravis is marked by exacerbations and remissions, which may be par-tial or complete. The weakness can be asymmetric, confined to one group of muscles, or generalized. Ocular muscles are most commonly affected, result-ing in fluctuating ptosis and diplopia. With bulbar involvement, laryngeal and pharyngeal muscle weakness can result in dysarthria, difficulty in chew-ing and swallowing, problems clearing secretions, or pulmonary aspiration. Severe disease is usually also associated with proximal muscle weakness (primar-ily in the neck and shoulders) and involvement of respiratory muscles. Muscle strength characteristi-cally improves with rest but deteriorates rapidly with exertion. Infection, stress, surgery, and pregnancy

have unpredictable effects on the disease but often lead to exacerbations. A number of medications may exacerbate the signs and symptoms of myasthenia gravis ( Table 35–3).

Anticholinesterase drugs are used most com-monly to treat the muscle weakness of this disorder. These drugs increase the amount of acetylcholine at the neuromuscular junction through inhibition of end plate acetylcholinesterase. Pyridostigmine is prescribed most often; when given orally, it has an effective duration of 2–4 h. Excessive administra-tion of an anticholinesterase may precipitate cho-linergic crisis, which is characterized by increasedweakness and excessive muscarinic effects, includ-ing salivation, diarrhea, miosis, and bradycardia. An edrophonium (Tensilon) test may help differenti-ate a cholinergic from a myasthenic crisis. Increased weakness after administration of up to 10 mg of intravenous edrophonium indicates cholinergic cri-sis, whereas increasing strength implies myasthenic crisis. If this test is equivocal or if the patient clearly has manifestations of cholinergic hyperactivity, all cholinesterase drugs should be discontinued and the patient should be monitored in an intensive care unit or close-observation area. Anticholinesterase drugs are often the only agents used to treat patients with mild disease. Moderate to severe disease is treated with a combination of an anticholinesterase drug and immunomodulating therapy. Corticosteroids are usually tried first, followed by azathioprine, cyclo-sporine, cyclophosphamide, mycophenolate mofetil, and intravenous immunoglobulin. Plasmapheresis is reserved for patients with dysphagia or respira-tory failure, or to normalize muscle strength preop-eratively in patients undergoing a surgical procedure, including thymectomy. Up to 85% of patients younger than 55 years of age show clinical improvement fol-lowing thymectomy even in the absence of a tumor, but improvement may be delayed up to several years.

Patients with myasthenia gravis may present for thymectomy or for unrelated surgical or obstetric procedures, and medical management of their con-dition should be optimized prior to the intended procedure. Myasthenic patients with respiratory and oropharyngeal weakness should be treated preop-eratively with intravenous immunoglobulin or plas-mapheresis. If strength normalizes, the incidence of postoperative respiratory complications should be similar to that of a nonmyasthenic patient under-going a similar surgical procedure. Patients sched-uled for thymectomy may have deteriorating muscle strength, whereas those undergoing other elective procedures may be well controlled or in remis-sion. Adjustments in anticholinesterase medication, immunosuppressants, or steroid therapy in the peri-operative period may be necessary. Patients with advanced generalized disease may deteriorate signif-icantly when anticholinesterase agents are withheld. These medications should be restarted when the patient resumes oral intake postoperatively. When necessary, cholinesterase inhibitors can also be given parenterally at 301 the oral dose. Potential problems associated with management of anticholinesterase therapy in the postoperative period include altered patient requirements, increased vagal reflexes, and the possibility of disrupting bowel anastomoses sec-ondary to hyperperistalsis. Moreover, because these agents also inhibit plasma cholinesterase, they could theoretically prolong the duration of ester-type localanesthetics and succinylcholine.

Preoperative evaluation should focus on the recent course of the disease, the muscle groups affected, drug therapy, and coexisting illnesses.Patients who have myasthenia gravis with respiratory muscle or bulbar involvement areat increased risk for pulmonary aspiration. Premedication with metoclopramide or an H2 blocker or proton pump inhibitor may decrease this risk. Because patients with myasthenia are often very sensitive to the respiratory depressant effect of opioids and benzodiazepines, premedication with these drugs should be done with caution, if at all.

With the exception of NMBs, standard anes-thetic agents may be used in patients with myasthe-nia gravis. Marked respiratory depression, however, may be encountered following even moderate doses of propofol or opioids. When general anesthesia is required, a volatile agent–based anesthetic is fre-quently employed. Deep anesthesia with a volatile agent alone in patients with myasthenia may provide sufficient relaxation for tracheal intubation and most surgical procedures, and many clinicians rou-tinely avoid NMBs entirely. The response to succi-nylcholine is said to be unpredictable, but we have not found this to be so in practice. Patients may manifest a relative resistance, or a moderately pro-longed effect . The dose of succinyl-choline may be increased to 2 mg/kg to overcome any resistance, expecting that the duration of paraly-sis could be increased by 5–10 min. Many patients with myasthenia gravis are exquisitely sensitive to nondepolarizing NMBs.Even a defasciculating dose in some patients may result in nearly complete paralysis. If NMBs are necessary, small doses of a relatively short-acting nondepolarizing agent are preferred. We have not found nondepolarizing NMBs to be necessary during thymectomy with volatile anesthesia. Neuromuscular blockade should be monitored very closely with a nerve stimulator, and ventilatory function should be evaluated carefully prior to extubation.

Women with myasthenia can experience increased weakness in the last trimester of pregnancy and in the early postpartum period. Epidural anesthe-sia is generally preferable for these patients because it avoids potential problems with respiratory depression and NMBs related to general anesthesia. Excessively high levels of motor blockade, however, can also result in hypoventilation. Infants of myasthenic mothers may show transient myasthenia for 1–3 weeks follow-ing birth, induced by transplacental transfer of ace-tylcholine receptor antibodies, which may necessitate intubation and mechanical ventilation.