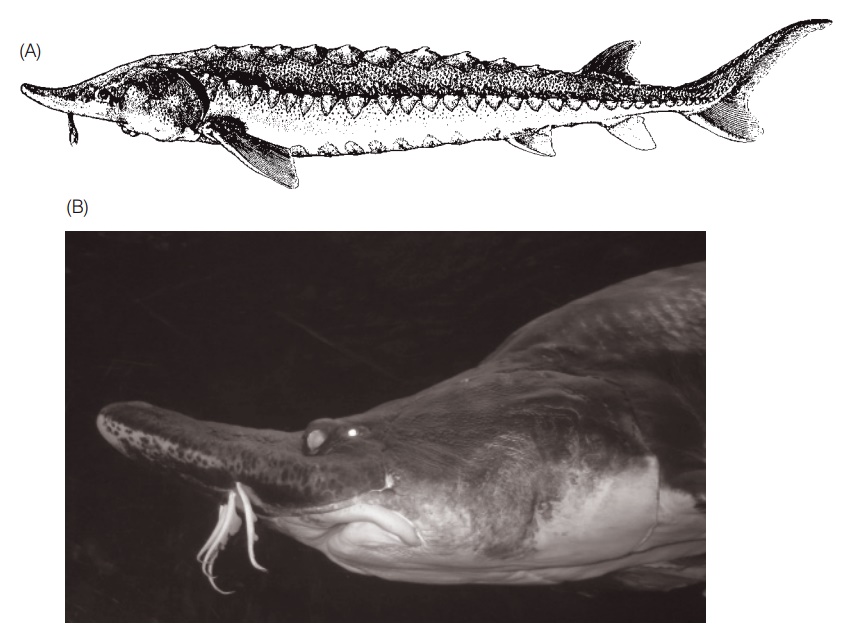 All 25 species of sturgeons are in the family Acipenseridae and are restricted to the northern hemisphere.

All 25 species of sturgeons are in the family Acipenseridae and are restricted to the northern hemisphere (Binkowski & Doroshov 1985; Williams & Clemmer 1991; Bemiset al. 1997; Vecsei et al. 2001; Van Winkle et al. 2002).Four genera are recognized, Acipenser, Huso, Scaphirhynchus, and Pseudoscaphirhynchus. All species spawn in fresh water, although some species move seasonally between marine and fresh water and some are technically anadromous. Species restricted to fresh water include the North American Lake Sturgeon (Acipenser fulvescens) and three river sturgeons (Scaphirhynchus spp.), the latter occurring only in larger rivers such as the Mississippi and Missouri. Anadromous species, those spending part of their lives at sea but returning to fresh water to spawn, include the Atlantic Sturgeon, Acipenser oxyrhynchus, the White Sturgeon, A. transmontanus (the largest North American freshwater fish, attaining a length of 3.6 m and a weight of 800 kg), and the beluga of eastern Europe and Asia, Huso huso (the largest and economically most valuable freshwater fish in the world, attaining a length of 8.6 m and a weight of 1300 kg, and not to be confused with the toothed whale of the same common name). As with other anadromous species (see  Diadromy), landlocked populations of sturgeons can develop.

Anatomically, sturgeons can be identified by the four barbels in front of the ventrally located mouth, five rows of bony scutes (large bony shields) on a body otherwise covered with minute ossifi cations, a heterocercal tail, elongate snout, a single dorsal fin situated near the tail, no branchiostegal rays, and a largely cartilaginous endoskeleton, including an unconstricted notochord (Fig. 13.15). 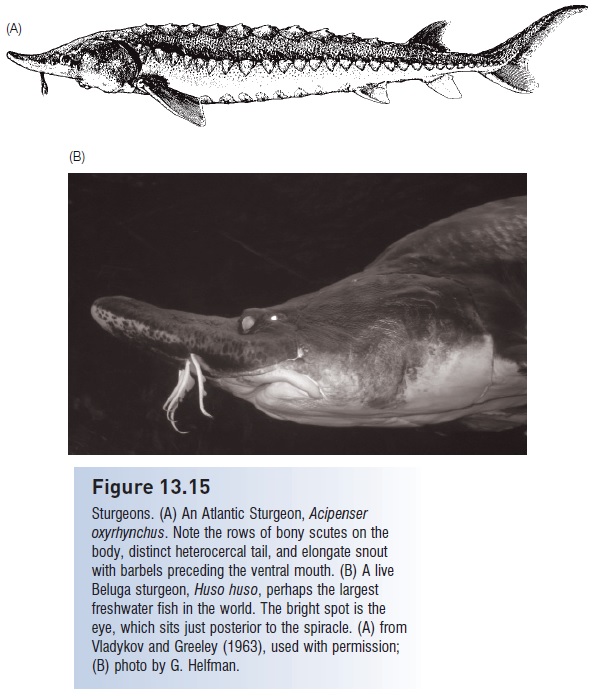 Sturgeons. (A) An Atlantic Sturgeon, Acipenser oxyrhynchus. Note the rows of bony scutes on the body, distinct heterocercal tail, and elongate snout with barbels preceding the ventral mouth. (B) A live Beluga sturgeon, Huso huso, perhaps the largest freshwater fish in the world. The bright spot is the eye, which sits just posterior to the spiracle. (A) from Vladykov and Greeley (1963), used with permission; (B) photo by G. Helfman

The life history traits of sturgeon make them unique and susceptible to overexploitation by humans. They are exceptionally long-lived: Beluga have been aged at 118 years, and White Sturgeon at 70–80 years (Nikolsky 1961; Scott & Crossman 1973; Casteel 1976). As is often the case with long-lived vertebrates, sexual maturity is attained slowly. In the Atlantic Sturgeon, both sexes mature after 5–30 years, the older ages characterizing individuals at higher latitudes. After maturation, females may only spawn every 3–5 years (Smith 1985b), and even longer intervals may characterize other sturgeon species. Fecundity is relatively high: ovaries may account for 25% of the body mass of a female, making a large female exceedingly valuable. A beluga female captured in 1924 from the Tikhaya Sosna River of Russia weighed 1227 kg and yielded 245 kg of caviar. High-grade caviar can sell for more than US$150/oz or $5000/kg, making the fish potentially worth in excess of $1 million.

Sturgeon are also commercially valuable as a smoked product, and the gas bladder was processed into isinglass and used for gelatin, clarifying agents, and as a commercial art glue. Natural predators beyond the juvenile stage are rare; parasitic lampreys are one of the few organisms capable of attacking an adult sturgeon (Scott & Crossman 1973). Hence natural mortality rates of adults were historically low, creating vulnerability when such species are subjected to the high mortality rates associated with commercial exploitation.

It is therefore not surprising that sturgeons worldwide have declined due to overexploitation, dam building, habitat destruction, and pollution. Large Atlantic Sturgeon were at one time suffi ciently abundant in North American coastal rivers that navigation by canoes and small boats was sometimes hazardous, particularly given the fish’s habit of leaping 1–2 m out of the water. Commercial landings exceeded 3 million kg annually in 1890, but 100 years later, landings were reduced by 99% (Smith 1985b).

Lake Sturgeon have been extirpated from a large part of their native range (ironically, Lake Sturgeon disappeared from the Sturgeon Falls area of the Menominee River, Wisconsin around 1969; Thuemler 1985). The Shortnose Sturgeon Acipenser brevirostrum of North America and the Baltic Sturgeon Acipenser sturio are two of the only nine fish species that appear in CITES Appendix I . Internationally, nine sturgeon stocks or subspecies are Critically Endangered, 25 are Endangered, and 13 are Vulnerable (www.redlist.org).

Five US species have Endangered Species Act protection, including the Alabama Sturgeon Scaphirhynchus suttkusi, the most recent sturgeon to have been described (Scharpf 2000). Although sturgeon fishing is highly regulated nationally and internationally, high economic values have promoted rampant poaching and black markets, at the same time that fishery management and enforcement programs have collapsed (Vecsei 2005; Helfman 2007).

Part of the vulnerability of sturgeons results from an interaction between habitat degradation and the reproductive biology of these large, slow maturing fishes. Spawning is hampered by siltation and contamination of clean gravel and rock areas, and by dam construction that blocks migrations and limits access to spawning sites. The spawning period in several species may be very short, on the order of 3–5 days, and if environmental conditions are inappropriate, spawning may be abandoned for that year (Buckley & Kynard 1985; Williot et al. 2002). Recruitment of new fish into the population is further prevented by overharvest of mature individuals and also of fish before they reach reproductive age (sometimes as a result of incidental bycatch of juveniles in gillnets set for anadromous shad or salmon). Given late maturation and the infrequency of spawning, stocks driven to low numbers have a difficult time re - covering, requiring extreme management solutions and

Acipenseroid fishes are generally regarded as highly modified descendants of palaeoniscoids that lived during the Permian and Triassic. Recognizable acipenseriforms have been found in Permian deposits in China (Lu et al. 2005), and early, recognizable sturgeon fossils date to the Upper Cretaceous of Montana (Wilimovsky 1956; Choudhury & Dick 1998). A related, extinct family, the Chondrosteidae, is known from fossils from the Lower Jurassic to Lower Cretaceous periods.