The different types of acetate are 1. Diacetate 2. Triacetate.

In 1904, cellulose acetate was developed by Camille Dreyfus and his younger brother Henri in England, during World War I. It was used as a non flam-mable lacquer for the fabrics used for cov-ering the wings and fuselage of aircrafts. In 1918, they perfected the technique of spinning this substance into lustrous fil-aments of “artificial silk”. Subsequently, British Celanese Ltd. started the produc-tion of this fibre. In 1924, the commercial production of acetate fabric started in the United States by Celanese Corp. In 1954, The Celanese Corp. of America undertook the production of a variation of this chem-ical called cellulose triacetate. This prod-uct is marketed by the Celanese Fibres Marketing Co. under the trademark Arnel.

The different types of acetate are

Pure cellulose is formed by converting cotton linters or wood sheets. This pure cellulose is steeped in glacial acetic acid and aged under controlled temperature for a period of time. It is then mixed with acetic anhydride and a small amount of sulphuric acid as a catalyst to facilitate the reaction which produces a thick and clear liquid solution of cellulose acetate. This liquid is then passed through the spin-neret to form these fibres which is solidi-fied and rolled on the bobbins for later use (Figure 3.2). 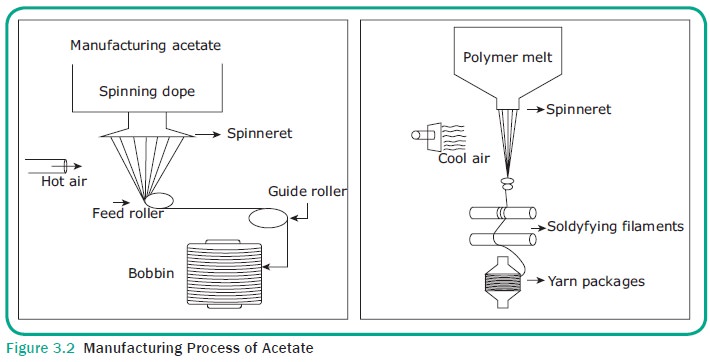 Properties of Acetate and Triacetate

Shape : Can be modified as per requirement

Luster  : Variation from brightness to dullness

Resiliency : Low for acetate, but for triacetate it is good.

Depending upon the kind of yarns used and the final effect desired, different fin-ishes can be given to acetate fabrics. The most common finishes are :

Embossing : For pattern or design

Napping : On spun acetate for softness and warmth

Water repellency : For resistance to water and rain

The uses of acetate are :

·           The breathable nature of the fabric makes it suitable for use as a lining fabric­ for apparels.

·           Acetate is used for making cigarette filters­ and other filters, ink reser-voirs for fibre tip pens.

·           It is used for making high absor-bency products like diapers and sur-gical products.