Home | | English 6th Std | A Childhood in Malabar: A Memoir

A Childhood in Malabar: A Memoir

A Childhood in Malabar: A Memoir - Supplementary by Kamala Das

A Childhood in Malabar: A Memoir

It was someone’s birthday at Ambazhathel – I’m not sure whose – the day there was a cyclone. Ettan, my elder brother, and I were invited to the feast there that day. Malathikutty took us to the serpent shrine before lunch. We watched Meenakshi Edathi setting out turmeric, milk and bananas for the snakes. 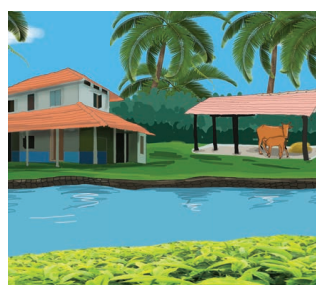 Meenakshi Edathi was a distant relative of the Ambazhathel family. Being poor, she was dependent on their generosity. She was dark-skinned and middle-aged. She spent her time rushing around the house and compound, never stopping to rest, her face perpetually wearing an expression that asked for forgiveness. She had only certain trivial duties to perform, like welcoming the oracle with an offering of paddy when he came in a procession, lighting all the lamps at dusk, churning the curd and taking out the butter for the children, and drawing designs with rice batter on the door on the day of the Nira festival. There were innumerable servants to carry out all other tasks. However, the family could not have existed happily for a single day without Meenakshi Edathi. She was the only one who knew how much paddy should be boiled each time to make enough rice for the household or how many mundus had been given to the washerman or when to give the children a purgative. 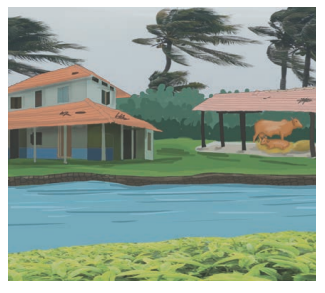 ‘Why isn’t the snake coming?’ I asked. ‘Snakes never come out when human beings are watching, child. The black Krishnasarpam will glide out as soon as we go away,’ said Meenakshi Edathi.

I began to feel sleepy after lunch. Malathikutty came back with us to Nalapat. Barely an hour after we got home, we heard the sound of the gale. The wind tore through the coconut palms in the southern compound with a frightening roar. The dry leaves that had collected around the pond swirled upwards belligerently. Branches shook. The seat of the swing that hung from the ilanji tree fell down.

‘I wonder whether it’s a cyclone . . . The sound of it scares me,’ said Ammamma. She asked all of us to sit down in the middle room upstairs and gave us metal dice to play with. Since the light had grown dim, she lit a brass lamp as well. Muthassi called out from the thekkini, the southern room, downstairs, ‘Have you closed all the small windows, Kochu?’ ‘I’ ll close them, Amme; I’ll close all of them,’ answered Ammamma. We suddenly heard the sound of the rain from the south-west, like the roar of a vast crowd of people. Using all her force, Ammamma slammed the windows shut. Raindrops glimmered on her face.

‘It’s not even four, but it’s pitch dark outside,’ said Ammamma.‘I want to see Kutti Oppu,’ said Malathikutty. ‘She’ll come by dusk,’ said Ammamma.‘I want to go to Ambazhathel now, this minute,’ said Malathikutty. ‘I’ll send you to Ambazhathel as soon as the storm stops.’ Ammamma tried to comfort her, but Malathikutty began to sob loudly. That was when we heard a coconut palm crashing down. ‘Kochu, what was that? Will the house collapse?’ That was Muthassi.

‘Don’t worry. It was a coconut palm falling. We’ll go and have a look at it once the rain stops. Let’s say our prayers and sit here quietly’, said Ammamma. All of us took shelter in the southern room downstairs as Ammaman’s mother instructed us to do. 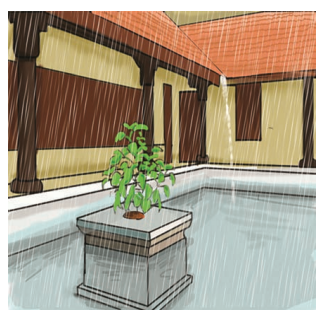 She said this room had the strongest ceiling. The thekkini was flooded and the water that had collected in the sunken courtyard of the nalukettu, the central hall with four wooden pillars, began to overflow. Ammaman and all of us sat on the bed. Ammamma and the grandmothers sat on the rolled-up mattresses stacked on the floor. And the servant woman took refuge in the makeshift toilet adjacent to the room.

Ammayi arrived, drenched to the skin, unmindful of the thunder and lightning and driving rain. ‘How can you be so foolish, Bala? What if you fall ill of a fever?’ asked Ammaman. Ammayi laughed. ‘Here’s Kutti Oppu,’ exclaimed Malathikutty joyfully. Ammayi hugged her.

Cheriamma suggested that we chant aksharaslokams to forget our fear: each one of us would have to recite a verse and the next person would follow with a verse that began with the first letter of the third line of the quatrain that had just been chanted. No one volunteered, though. So Cheriamma recited from Vallathol’s Imprisoned Aniruddhan. Ammamma said, ‘I can’t remember a single couplet.’ ‘I hope the house doesn’t collapse,’ murmured Muthassi.

As soon as Ammaman and Ammayi went upstairs, the servant woman started to wail loudly. She kept hitting her head with her hands while she wailed. ‘What madness is this?

Do you want to break open your head?’ asked Ammamma. ‘What if I never see my folks again. . . My Guruvayoorappa! I’ll never see them again!’ ‘You can go home tomorrow morning, as soon as the rain stops. All right?’ said Muthassi. ‘This rain will never stop. It’s a whirlwind, isn’t it? We’ll all die,’ sobbed the woman.

‘Is she crazy?’ asked Muthassi. We heard trees crashing to the ground. And a dog whining in the western yard. ‘Aiyo, Sankara! What if the cowshed crumbles? Bring the cows in and tie them up in the washing area outside the kitchen,’ said Ammamma. ‘The cowshed won’t fall down, Valiamma. Its beams are quite strong,’ said Sankaran Nair, who had gone to check things out. ‘Then let the cows stay there.’

‘There’s knee-deep water in the yard now,’ said Sankaran. ‘We want to swim,’ I cried. ‘You can swim in the courtyard of the nalukettu,’ said Ettan. I put my hand into the water in the courtyard. ‘It’s ice-cold.’ I grumbled. ‘Don’t play in the water, children,’ Ammamma called out loudly. We climbed back on the bed. Someone seemed to be knocking on the door on the southern side. Sanakaran opened it. A dog stood on the verandah, dripping wet-Thumbi, the black-and-white pet dog from Ambazhathel.

‘Look, here’s Thumbi. ‘He’s drenched. Poor thing, he must have come out with Balamani Amma’, said Sankaran. We looked at Thumbi and he looked at us. He was shivering in the cold. Sankaran spread a gunny bag on the verandah. ‘Lie down on this. In a storm like this, how can we make a difference between a man and a dog? Go to sleep, Thumbi.’ Thumbi lay down on the gunny bags and looked contentedly at me and my brother. We spent the whole night in the southern room. By the time we woke up, the rain had stopped.

It was the sound of a pleading voice saying ‘Please open the gate’ that actually woke me. A young man stood smiling in the waist-high water at the gate. ‘I’m from Vadekkara. Is everyone here all right?’ ‘Yes,’ said Ammamma. ‘We’ve had no casualties. How did you come, Balan?’ ‘I started out at daybreak and waded through the water.’ ‘That’s really smart!’ ‘The number of huts and trees that have collapsed! Fowls lying dead everywhere, dead goats floating in the water what a sight!’ Come in, Balan, and change your mundu.’

‘Have they sent us anything from Vadekkara? Murukkus or dates?’ I asked. ‘No, child. I’ve come empty-handed,’ said Balan, displaying his buck teeth. ‘What a time to ask for murukkus and dates!’ muttered Ammaman’s mother. I hung my head, ashamed.