Home | | Clinical Cases in Anesthesia | What treatment should be administered to this patient? What else should be checked on physical examination?
Posted On :  09.09.2017 02:05 am

What treatment should be administered to this patient? What else should be checked on physical examination?

The A and B of the ABCs are already addressed in this case, since the patient is intubated and mechanically ventilated.

What treatment should be administered to this patient? What else should be checked on physical examination?

The A and B of the ABCs are already addressed in this case, since the patient is intubated and mechanically ventilated. Epinephrine 50–100 μg (0.5–1 mL of a 1:10,000 solu-tion found in pre-filled syringes, or 0.05–0.1 mL of the more commonly used 1:1,000 solution), or 0.01 mg/kg in children, should be administered subcutaneously if the patient is merely hypotensive, and may be repeated as needed. Higher doses and the intravenous route should be used if the reaction is severe, or if cardiac arrest supervenes. High doses of epinephrine are more efficacious but cases of myocardial ischemia or even infarction after epinephrine administration have been reported. A review of 164 cases of fatal anaphylaxis in the United Kingdom showed that epinephrine overdose caused at least three of these fatalities. An intravenous infusion of epinephrine (1 mg in 250 mL at a rate of 0.05–2 μg/min) should be considered if repeat doses are necessary.

Epinephrine acts by two mechanisms: it reverses vasodi-lation by its α-agonist effects, and it blocks further degran-ulation of mast cells or basophils through its β-agonist effects. It may also improve cerebral perfusion independent of its effect on blood pressure by β2-mediated vasodilation, and it is very effective in the treatment of bronchospasm.

Other measures to be taken are:

·  Fluid resuscitation with crystalloids or colloids. Increased vascular permeability can transfer 50% of intravascular fluid into the extravascular space within 10 minutes. The amount of fluid administered should be based on hemo-dynamic parameters.

·  Intravenous steroids (e.g., methylprednisolone 1–2 mg/kg intravenously (IV); repeat q4–6 hourly as needed). Steroids may have no effect for 4–6 hours, but may pre-vent persistent or biphasic anaphylaxis.

·  Glucagon (1–5 mg IV) in severe reactions. Glucagon directly activates adenyl cyclase and bypasses the β-adrenergic receptor. It may reverse refractory hypoten-sion and bronchospasm. Glucagon or atropine should be used in β-blocked patients to increase an inappropriately slow heart rate.

If cardiac arrest supervenes, advanced cardiac life sup-port (ACLS) protocols should be followed, including epi-nephrine, atropine, and transcutaneous pacing in case of pulseless electrical activity. In addition, rapid volume expansion is mandatory. Prolonged resuscitative efforts are encouraged, since recovery is more likely to be successful in anaphylaxis, in which the subject is often a young individ-ual with a healthy cardiovascular system.

Therapeutic options for anaphylaxis are presented in Table 87.1. 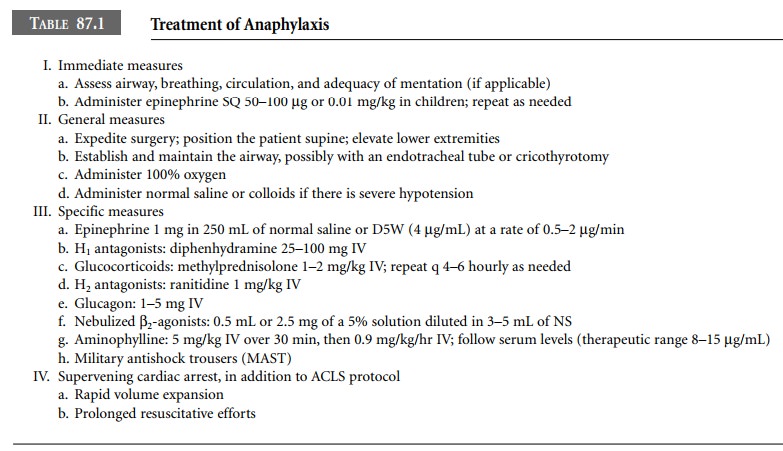 The chest should be auscultated since bronchospasm is often triggered by anaphylactic or anaphylactoid reac-tions. If bronchospasm does not respond to the treatment administered for anaphylaxis, inhaled β2-agonists and pos-sibly aminophylline should be added to the regimen. Volatile anesthetics can also be used (if that is not already the case, and if the blood pressure allows) for their bron-chodilating properties.

Study Material, Lecturing Notes, Assignment, Reference, Wiki description explanation, brief detail
Clinical Cases in Anesthesia : Anaphylaxis : What treatment should be administered to this patient? What else should be checked on physical examination? |