Learning Objectives - After completing this lesson, students will be able to: * know about the sources of water. * understand the importance of water management. * get awareness on water pollution. * know about waterborne diseases.

After completing this lesson, students will be able to:

* know about the sources of water.

* understand the importance of water management.

* get awareness on water pollution.

Thirukkural says, ‘If it be said that the duties of life cannot be discharged by any person without water, so without rain there cannot be the flowing of water’. We can’t survive without water. Water was once available in the nature freely. Now it is sold in the shops for money. Water has become scarce nowadays. So, we should preserve it for our basic needs and also for the needs of future generation. In this lesson we will study about the sources of water, how to manage water, how it is polluted and how the polluted water causes diseases.

I. Sources of Water

Water is the most abundant substance on the Earth. It fills the seas, rivers and lakes, and covers more than two-thirds of the earth’s surface. It also exists as snow and ice on mountains. In the atmosphere, water is present in huge quantities as vapour and clouds. The following are the sources of water.

River is a channel through which fresh water flows. The origin of river is usually hills or mountains. It flows towards ocean, sea and lakes. Lake is an area filled with water. Man-made lakes created when dam is built on a river is called reservoir. Small areas filled with water are called ponds. Rivers, streams, groundwater, rainfall, melting snows or a combination of these are the sources of water in lakes, reservoirs and ponds. As less amount of salt is dissolved in it, it is suitable for drinking and irrigation. 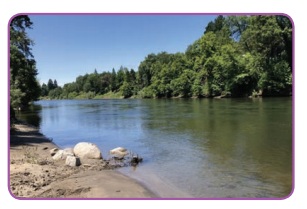 Due to the presence of more amount of salt, sea water is called saline water. It is not suitable for irrigation as well as drinking. Sea water has salinity of approximately 3.5% or 35 parts per thousand. This means that every 1000 ml of sea water contains 35 grams of salts (Sodium chloride) dissolved in it. 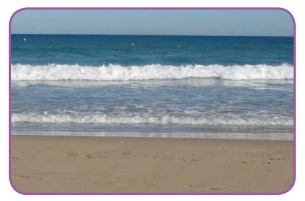 During rainfall, part of the rain water gets absorbed in the soil. It flows through various layers of the soil till it reaches hard rock, where it gets accumulated to form reservoir. This reservoir of water is the underground water. This water may contain soluble salts of calcium and magnesium. Underground water is made available for human use either as well water or spring water

Underground water is free from suspended impurities, because it is filtered by nature as it passes through several layers of the soil.

When the earth’s surface is dug deep, water reservoirs are found above the rocks. The depth of a well varies from place to place. Well water contains soluble impurities depending upon the nature of soil. 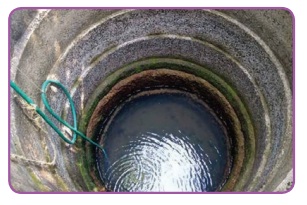 Sometimes the accumulated underground water applies pressure on the rocks and comes out of the earth’s surface in the form of a spring from any available opening. This water is called spring water. Spring water usually contains dissolved salts and minerals but it is free from suspended impurities. 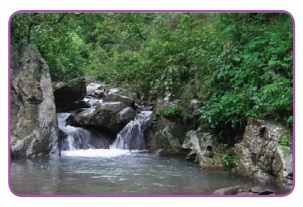 Continuous movement of water from the Earth to the atmosphere and back to the Earth is known as water cycle or hydrologic cycle. Water cycle consists of the following four stages.

The process in which water is changed into water vapour by the heat of the sun is called evaporation. It takes place from the surfaces of rivers, oceans, lakes and ponds. Plants also release water by transpiration.

The process of converting water vapour into water on cooling is called condensation. Water vapour in the atmosphere being lighter, rises up and cools down. It further condenses to form tiny water droplets. 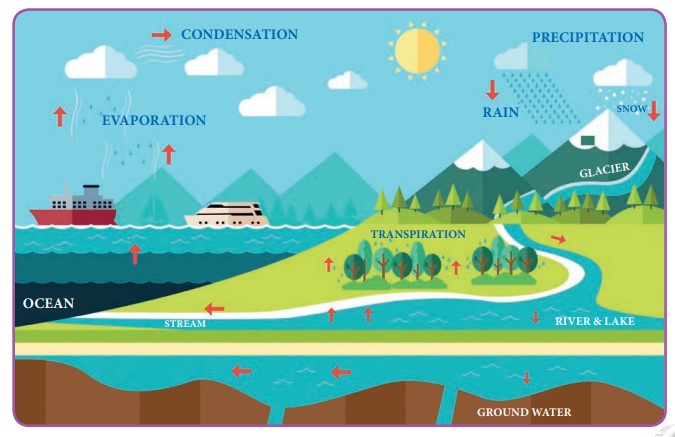 The water droplets join together to form clouds. As they get cooler, the droplets become bigger and heavier and fall as rain. If the air is very cold, they freeze to fall as hail of snow.

* Flowing back to Oceans

Rain water forms streams and springs which join together to form rivers. Rivers flow finally into the sea and ocean thereby completing the cycle.

In freezing conditions, water falling from the sky becomes snow or hail. Hail stones are balls of ice.

Take half a glass of water. Clean the outside part of the glass. Add few ice cubes and leave it for 5-10 minutes. You will observe drops of water appearing outside the glass. This happens because the water vapour in the air condenses on the cold surface of the glass.

About 97% of total water available on the earth is too salty to be used for drinking and irrigation. The rest 3% of water is fresh water. Most of the fresh water i.e., 68.7% of the total fresh water is frozen as ice caps and glaciers and 30.1% occurs as ground water. Out of the remaining 1.2% of water, about 0.9% occurs as moisture in soil, air and in bodies of living organisms. The rest 0.3% constitutes fresh surface water sources, such as rivers and lakes. It amounts to about 700th part of one percent (1/700) of total water available on earth. By this it is clear that a very small fraction of water is available for the use of human beings, animals and plants. The following figure shows the percentage distribution of total available water. 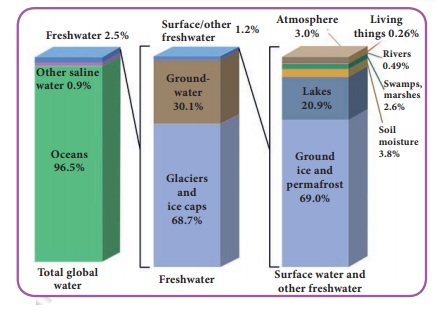 Agriculture is the source of our living. It uses most of the world’s fresh water resources. It consumes around 70% of the available fresh water.

Water management is the activity of planning, developing and managing the optimum use of water resources. Water which is obtained naturally from ice sheets, ice caps, glaciers, ice bergs, ponds, lakes, rivers, streams and underground are called fresh water. Fresh water is having low concentrations of dissolved salts. Nowadays we don’t get enough rainfall and except few, most of the rivers are drained. Due to recent changes in the climate we don’t have water in lakes and ponds. People in many countries suffer without water even for their basic needs. So, we need to manage the available water. 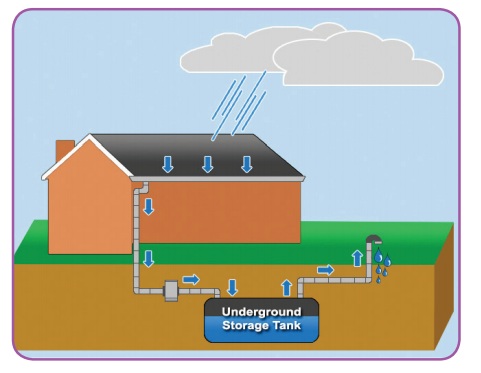 → Rain water harvesting can reduce flooding in the cities.

→ Ground water level can be increased.

→ Ground water can be conserved.

→ It can improve plant growth.

Estimate the amount of water used by your family in a day for drinking, brushing, bathing, cleaning vessels, washing cloths, toilets and cleaning the floor. Find out for which activity water usage is more and how it can be minimized.

A farm pond is a structure dug out on the Earth. It is usually square or rectangular in shape. Rainwater is stored in it for irrigation purposes. It is surrounded by a small bund, which prevents erosion on the banks of the pond. The size and depth of the pond depend on the type of the soil, water requirements of the farmer, its uses and the cost of excavation. Water is conveyed to the fields manually, by pumping, or by both. 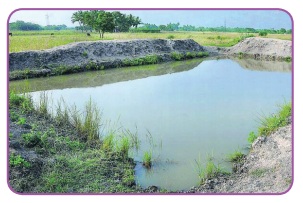 Used water from any combination of activities such as domestic (houses), industrial, commercial, agricultural is called waste water. This water has been used for laundry, bathing, dish washing, toilets and industrial purposes. Waste water also includes rain water that has been accumulated pollutants as it runs into the oceans, lakes and rivers. Pollutants are unwanted chemicals or materials that contaminate water. The goal of waste water management is to clean and protect water so that it can be reused. It also must be clean before it flows into oceans, lakes and rivers.

Visit an industry in your area with the help of your teacher. Observe and note the waste water treatment process.

→ Waste water treatment ensures that the environment is clean.

→ There is no water pollution.

→ It ensures that there is adequate water for irrigation.

Desalination is an artificial process of converting saline water (sea water) into fresh water. The common desalination processes are:

The process in which both evaporation and condensation go side by side is called distillation. Reverse osmosis is a process of forcing water under pressure through a semi permeable membrane. Tiny pores in the membrane allow water to pass but exclude most salts and minerals. The reverse osmosis process helps to solve the water scarcity problem.

25% of the world population does not get safe drinking water. 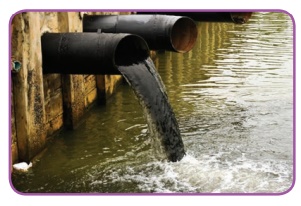 The dumping of sewage into rivers and lakes is the second major cause of water pollution in big cities. 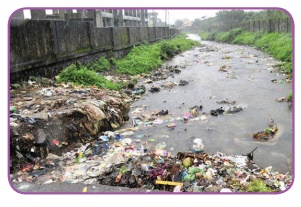 Food waste, soaps and detergents, garbage, wrappers, plastics and other materials carried by the flowing water pollute the water bodies.

The excess use of fertilizers and pesticides causes water pollution. Because these chemicals are washed into the rivers and lakes with rainwater, they pollute the soil and underground water also. Pesticides like DDT (Dichloro Diphenyl Trichloroethane) enter the bodies of aquatic animals and reach the human body by way of food chain. 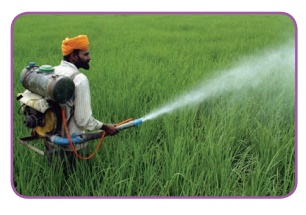 Excess use of synthetic detergents for washing purposes produces foam and they pollute the water.

Oil leakages on the surface of the sea affect the marine organisms. 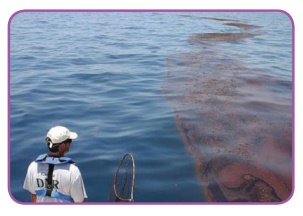 * Excess use of fertilizers and pesticides should be avoided in agricultural land.

* Trees and shrubs should be planted along the banks of the rivers or lakes.

* Plastic waste, food materials and vegetables should not be thrown into open drains.

* Proper sewage treatment and management should be implemented.

Illness caused by the micro-organisms present in the untreated or contaminated water is called waterborne diseases. They are responsible for morbidity and mortality in all age groups particularly among children under 5 years of age. It is believed that 80% of all diseases in the world are caused by inadequate sanitation and polluted water. Poverty, illiteracy, overcrowding and low health services are also directly or indirectly responsible for the prevalence of these diseases.

Diarrhoea, dysentery, typhoid and cholera are some of the common waterborne diseases. They are caused by micro-organisms like bacteria and virus. Some of them are spread by mosquitoes. The following table gives the causative agents and the symptoms of few waterborne diseases. 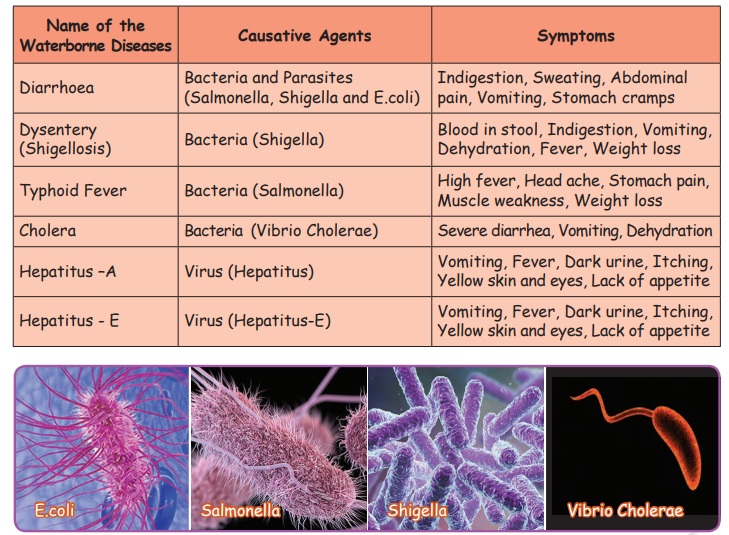 People all over the world are worstly affected by diarrhoeal diseases. Three million people die worldwide every year due to these diseases.

Visit a primary health centre in your area and find out the common waterborne diseases prevalent among the people. Also find out the causes for them.

* Good personal hygiene should be practiced and basic sanitation should be improved.

* Chlorinated and boiled water should be used for drinking.

Apart from the waterborne diseases mentioned above, there are many diseases which are spread by vectors which breed in stagnant water in our surrounding. For example, Aedes mosquito breeds in stagnant water and it causes Dengue fever. Similarly, pigs feed in the stagnant sewage water. The pigs infected by virus spread Swine flu.

Dengue is a viral disease spread by Aedes female mosquitoes that bite during day time. They breed in clean stagnant water found in containers and old tyres.

* Deficiency of platelets in blood. 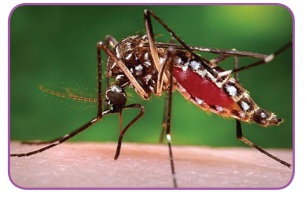 * Close the doors and windows during early morning and evening.

* Do not leave stagnant water anywhere in and around the house.

Aedes mosquitoes also transmit Chikungunya and Yellow fever. This can result in death if any treatment is not taken.

* Dengue is caused by a virus and so there is no specific treatment or cure.

* A high fever and vomiting can dehydrate the body. So the person should drink clean water (bottle water).

* Rehydration salts can help replace the fluids and minerals lost in the body.

* Taking pain killers like Tylenol or Paracetamol can help to reduce fever and ease pain.

Swine flu is a respiratory disease caused by Influenza virus that infects the respiratory tracts of pigs and results in barking cough. It can be transmitted to human beings. People who are constantly exposed to pigs are at risk of Swine flu infection. By keeping our surrounding free from sewage water, we can avoid exposure to pigs. 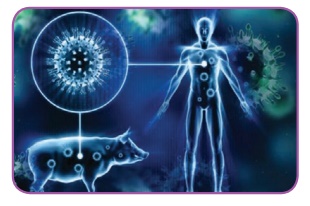