Home | Vocabulary - Little Cyclone: The Story of a Grizzly Cub

Vocabulary - Little Cyclone: The Story of a Grizzly Cub

A. Use the following phrases in sentences of your own.

earn one's name; in the rear of; to see one fi ght; devoid of; air and manner; quick as a fl ash; in wild haste; make a pass

B. Now refer a dictionary and find idioms on the following animals, birds and insects. Learn their meanings and share what you have learnt with your class. Try to frame illustrative sentences with those idioms. Find opportunities to use them in your everyday conversations.

C. Based on your reading, answer the following questions in a paragraph of about 100—150 words each.

1.     Describe the appearance of Little Cyclone.

2.     What does the fight Little Cyclone and his brother put up, tell you about the nature of grizzly bears?

3.     "If any of you fellows think there is anything coming to you from me, come and take it". How did Liitle Cyclone prove this?

4.     Describe the confrontation between Little Czar and Little Cyclone.

a)     appearance and behaviour.

b)    viguor of  resistence to ill-treatment.

b)    he did not have proper equipment to seize him.

b)    friendly hands of the Zoological Society.

b)    grizzly cub from Alaska. 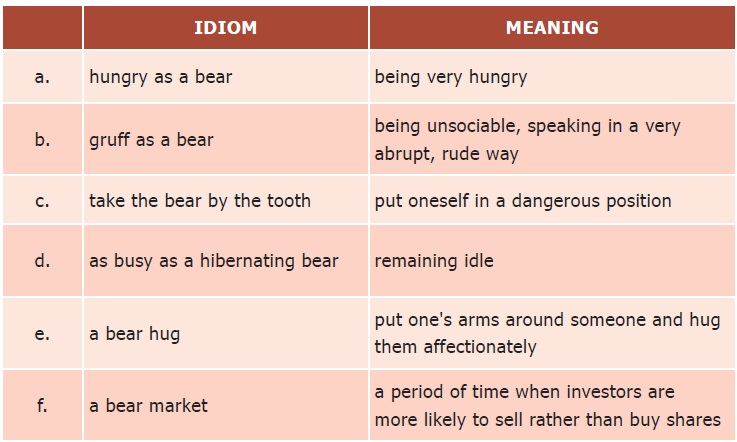