An LVDT, or Linear Variable Differential Transformer, is a transducer that converts a linear displacement or position from a mechanical reference (or zero) into a proportional electrical signal containing phase (for direction) and amplitude information (for distance). The LVDT operation does not require electrical contact between the moving part (probe or core rod assembly) and the transformer, but rather relies on electromagnetic coupling; this and the fact that they operate without any built-in electronic circuitry are the primary reasons why LVDTs have been widely used in applications where long life and high reliability under severe environments are a required, such Military/Aerospace applications.

The LVDT consists of a primary coil (of magnet wire) wound over the whole length of a non-ferromagnetic bore liner (or spool tube) or a cylindrical coil form. Two secondary coils are wound on top of the primary coil for “long stroke” LVDTs (i.e. for actuator main RAM) or each side of the primary coil for “Short stroke” LVDTs (i.e. for electro-hydraulic servo-valve or EHSV). The two secondary windings are typically connected in “opposite series” (or wound in opposite rotational directions). A ferromagnetic core, which length is a fraction of the bore liner length, magnetically couples the primary to the secondary winding turns that are located above the length of the core. 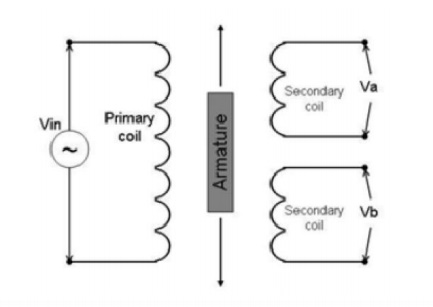 When the primary coil is excited with a sine wave voltage (Vin), it generate a variable magnetic field which, concentrated by the core, induces the secondary voltages (also sine waves). While the secondary windings are designed so that the differential output voltage (Va-Vb) is proportional to the core position from null, the phase angle (close to 0 degree or close to 180 degrees depending of direction) determines the direction away from the mechanical zero. The zero is defined as the core position where the phase angle of the (Va-Vb) differential output is 90 degrees.

The differential output between the two secondary outputs (Va-Vb) when the core is at the mechanical zero (or “Null Position”) is called the Null Voltage; as the phase angle at null position is 90 degrees, the Null Voltage is a “quadrature” voltage. This residual voltage is due to the complex nature of the LVDT electrical model, which includes the parasitic capacitances of the windings

When energized with a fixed AC source, the output signal is linear within a specified range over the angular displacement. RVDT’s utilize brushless, non-contacting technology to ensure long-life and reliable,     repeatable   position sensing with infinite resolution. Such reliable and repeatable performance assures accurate position sensing under the most extreme operating conditions. Moog offers seven frequency optimized RVDT’s in a basic size 8 configured housing. Each is designed to operate at a specific frequency. Frequency optimization provides the benefit of an increased operating range of angular displacement with a reduction in sensor size and weight. 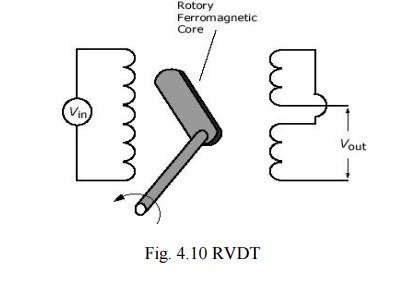 The Rotational Variable Differential Transformer (RVDT) is used to measure rotational angles and operates under the same principles as the LVDT sensor. Whereas the LVDT uses a cylindrical iron core, the RVDT uses a rotary ferromagnetic core. A schematic is shown below.