A variety of biotechnology genetic engineering techniques have been employed to create a wealth of transgenic plant species: cotton, maize, soybean, potato, petunia, tobacco, papaya, rose and others.

A variety of biotechnology genetic engineering techniques have been employed to create a wealth of transgenic plant species: cotton, maize, soybean, potato, petunia, tobacco, papaya, rose and others. Agricultural enhancements have resulted by engineering plants to be more herbicide-tolerant, insect-resistant, fungus-resistant, virus resistant, and stress tolerant (Baez, 2005; Andrawiss, 2006; Fox, 2006). Of importance for human health and pharmaceutical biotechnology, gene transfer technology is routinely used to manipulate bulk human protein production in a wide variety of transgenic plant species. It is significant to note that transgenic plants are attractive bulk bioreactors because their post-translation modification processes often result in plant-derived recombinant human proteins with greater glycosyla-tion pattern similarity to that found in the corresponding native human proteins than would be observed in a corresponding mammalian production system. The transgenic seeds would result in seedlings capable of expressing the human protein. Transplantation to the field followed by normal growth, harvest of the biomass, and downstream isolation and protein purification results in a valuable alternative crop for farming. Tobacco fields producing pharmaceutical grade human antibodies (sometimes referred to as “plantibodies”) and edible vaccines contained in transgenic potatoes and tomatoes are not futuristic visions, but current research projects in academic and corporate laboratories. Farmers’ fields are not the sole sites for human protein production from flora. For example, cultured eukaryotic mico-algea is also being developed into a useful expression system, especially for human and humanized antibodies (Mayfield and Franklin, 2005). With antibody-based targeted ther-apeutics becoming increasingly important, the use of transgenic plants will continue to expand.

The techniques to produce transgenic animals have been used to develop animal strains that secrete high levels of important proteins in various end-organs such as milk, blood, urine and other tissues. During such large animal “gene farming,” the transgenic animals serve as bioreactors to synthesize recoverable quantities of therapeutically useful pro-teins. Among the advantages of expressing protein in animal milk is that the protein is generally produced in sizable quantities and can be harvested manually or mechanically by simply milking the animal. Protein purification from the milk requires the usual separation techniques as described. In general, recombinant genes coding for the desired protein product are fused to the regulatory sequences of the animal’s milk-producing genes. The animals are not endangered by the insertion of the recombinant gene. The logical fusion of the protein product gene to the milk-producing gene targets the transcription and translation of the protein product exclusively in mammary tissues normally involved in milk produc-tion and does not permit gene activation in other, non-milk producing tissues in the animal. Transgenic strains are established and perpetuated by breeding the animals since the progeny of the original transgenic animal (founder animal) usually also produce the desired recombinant protein.

Yields of protein pharmaceuticals produced transgenically are expected to be 10–100 times greater than those achieved in recombinant cell culture (Echelard et al., 2005). Protein yields from transgenic animals are generally good [conservative estimates of 1 gram/Liter (g/L) with a 30% purification efficiency] with milk yield from various species per annum estimated at: cow ¼ 10,000 L; sheep ¼ 500 L; goat ¼ 400 L; and pig ¼ 250 L (Rudolph, 1995). PPL Therapeutics has estimated that the cost to produce human therapeutic proteins in large animal bioreac-tors could be as much as 75% less expensive than cell culture. In addition, should the desired target protein require post-translational modification, the large mammals used in milk production of pharmaceuticals would be a bioreactor capable of adding those groups (unlike a recombinant bacterial culture). 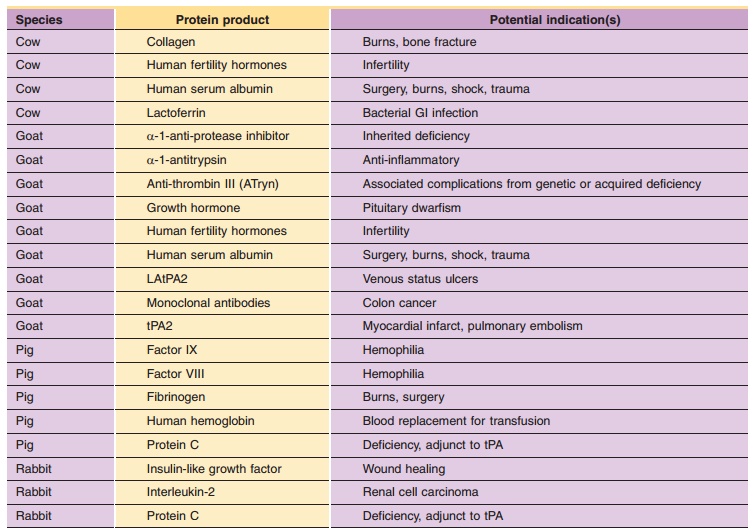