For thousands of years, man has selectively bred animals and plants either to enhance or to create desirable traits in numerous species.

For thousands of years, man has selectively bred animals and plants either to enhance or to create desirable traits in numerous species. The explosive development of recombinant DNA technology and other molecular biology techniques have made it possible to engineer species possessing particular unique and distinguishing genetic characteristics. The genetic material of an animal or plant can be manipulated so that extra genes may be inserted (transgenes), replaced (i.e., human gene homologs coding for related human proteins), or deleted (knockout). Theoretically, these approaches enable the introduction of virtually any gene into any organism. A greater understanding of specific gene regulation and expression will contribute to important new discoveries made in relevant animal models. Such genetically altered species have found utility in a myriad of research and potential commercial applica-tions including the generation of models of human disease, protein drug production, creation of organs and tissues for xenotransplantation, a host of agricul-tural uses, and drug discovery (Dunn et al., 2005).

Gordon and Ruddle first used the term “transgenic” in 1981 to describe an animal in which a foreign DNA segment (a transgene) was incorporated into their genome. Later, the term was extended to also include animals in which their endogenous genomic DNA has had its molecular structure manipulated (Gordon and Ruddle, 1981; Isola and Gordon, 1991). While there are some similarities between transgenic technology andgene therapy, it is important to distinguish clearly between them. Technically speak-ing, the introduction of foreign DNA sequences into a living cell is called gene transfer. Thus, one method to create a transgenic animal involves gene transfer (transgene incorporated into the genome). Gene therapy is also a gene transfer procedure and, in a sense, produces a transgenic human. In transgenic animals, however, the foreign gene is transferred indiscriminately into all cells, including germ line cells. The process of gene therapy differs generally from transgenesis since it involves a transfer of the desired gene in such a way that involves only specific somatic and hematopoietic cells, and not germ cells. Thus unlike in gene therapy, the genetic changes in transgenic organisms are conserved in any offspring according to the general rules of Mendelian inheritance.

The production of transgenic animals is not a new technology (Dunn et al., 2005). They have been produced since the 1970s. However, modern biotech-nology has greatly improved the methods of inducing the genetic transformation. While the mouse has been the most studied animal species, transgenic technol-ogy has been applied to cattle, fish (especially Zebrafish), goats, poultry, rabbits, rats, sheep, swine, and various lower animal forms. Transgenic animals have already made valuable research contributions to studies involving regulation of gene expression, the function of the immune system, genetic diseases, viral diseases, cardiovascular disease, and the genes re-sponsible for the development of cancer. Transgenic animals have proven to be indispensable in drug lead identification, lead optimization, preclinical drug development, and disease modeling.

The production of transgenic animals has most commonly involved the microinjection (also called gene transfer) of 100 to 200 copies of exogenous transgene DNA into the larger, more visible male pronucleus (as compared to the female pronucleus) of a recipient fertilized embryo (Fig. 6). The transgene contains both the DNA encoding the desired target amino acid sequence along with regulatory sequences that will mediate the expression of the added gene. The microinjected eggs are then implanted into the reproductive tract of a female and allowed to develop into embryos. The foreign DNA generally becomes randomly inserted at a single site on just one of the host chromosomes (i.e., the founder transgenic animal is heterozygous). Thus each transgenic founder animal (positive transgene incorporated animals) is a unique species. Interbreeding of founder transgenic animals where the transgene has been incorporatedinto germ cells may result in the birth of a homozygous progeny provided the transgene incor-poration did not induce a mutation of an essential endogenous gene. All cells of the transgenic animal will contain the transgene if DNA insertion occurs prior to the first cell division. However, usually only20% to 25% of the offspring contain detectable levels of the transgene. Selection of neonatal animals possessing an incorporated transgene can readily be accomplished either by the direct identification of specific DNA or mRNA sequences or by the observa-tion of gross phenotypic characteristics. 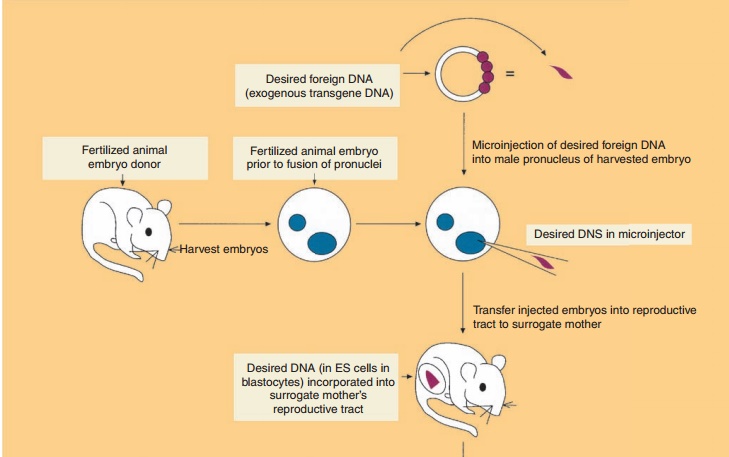 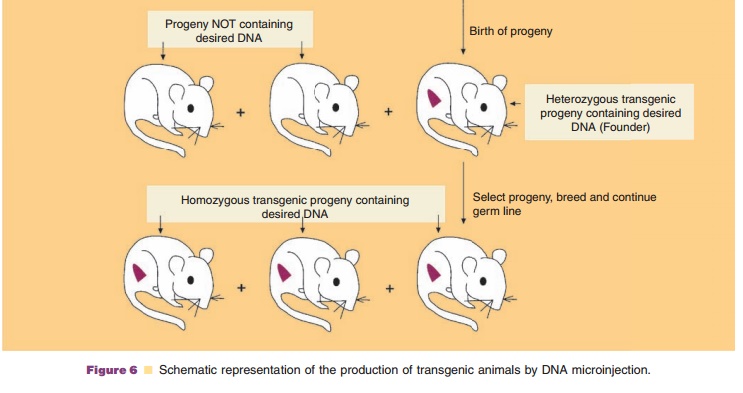 The production of the first genetically altered labora-tory mouse embryos was by insertion of a transgene via a modified retroviral vector. The non-replicating viral vector binds to the embryonic host cells, allowing subsequent transfer and insertion of the transgene into the host genome. Many of the experi-mental human gene therapy trials employ the same viral vectors. Advantages of this method of transgene production are the ease with which genes can be introduced into embryos at various stages of development, and the characteristic that only a single copy of the transgene is usually integrated into the genome. Disadvantages include possible genetic recombination of the viral vector with other viruses present, the size limitation of the introduced DNA (up to 7 kb of DNA, less than the size of some genes), and the difficulty in preparing certain viral vectors.

Transgenic animals can also be produced by the in vitro genetic alteration of pluripotent embryonic stem (ES) cells (Fig. 7) (Sedivy and Joyner, 1992). ES cell technology is more efficient at creating trans-genics than microinjection protocols. ES cells, a cultured cell line derived from the inner cell mass (blastocyst) of a blastocyte (early preimplantation embryo), are capable of having their genomic DNA modified while retaining their ability to contribute to both somatic and germ cell lineages. The desired gene is incorporated into ES cells by one of several methods such as microinjection. This is followed by introduc-tion of the genetically modified ES cells into the blastocyst of an early preimplantation embryo, selec-tion and culturing of targeted ES cells which are transferred subsequently to the reproductive tract of the surrogate host animal. The resulting progeny is screened for evidence that the desired genetic modification is present and selected appropriately. In mice, the process results in approximately 30% of the progeny containing tissue genetically derived from the incorporated ES cells. Interbreeding of selected founder animals can produce species homo-zygous for the mutation. 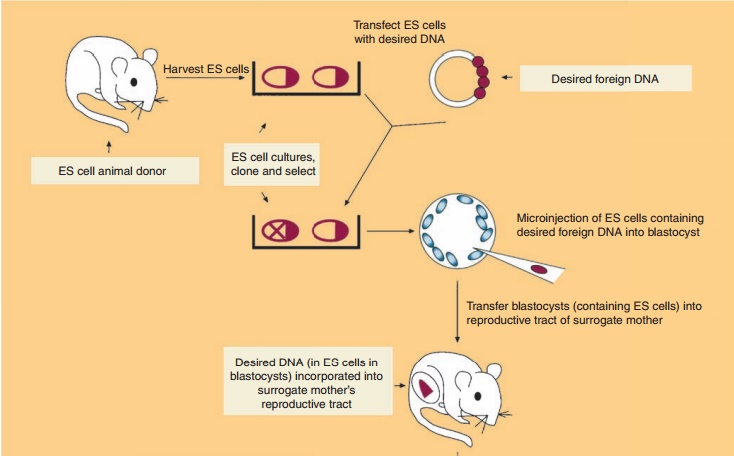 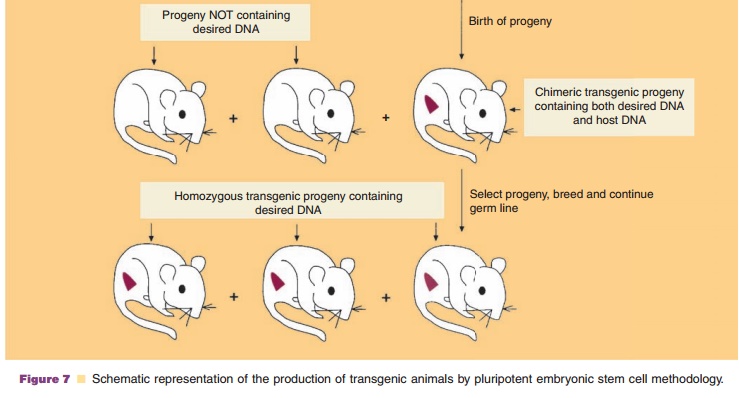 While transforming embryonic stem cells is more efficient than the microinjection technique described first, the desired gene must still be inserted into the cultured stem cell’s genome to ultimately produce the transgenic animal. The gene insertion could occur in a random or in a targeted process. Non-homologous recombination, a random process,

readily occurs if the desired DNA is introduced into the ES cell genome by a gene recombination process that does not require any sequence homology between genomic DNA and the foreign DNA. While most ES cells fail to insert the foreign DNA, some do. Those that do are selected and injected into the inner cell mass of the animal blastocyst and thus eventually lead to a transgenic species. In still far fewer ES cells, homologous recombination occurs by chance. Segments of DNA base sequence in the vector find homologous sequences in the host genome and the region between these homologous sequences replaces the matching region in the host DNA. A significant advance in the production of transgenic animals in ES cells is the advent of targeted homologous recombina-tion techniques.

Homologous recombination, while much more rare to this point in transgenic research than non-homologous recombination, can be favored when the researcher carefully designs (engineers) the trans-ferred DNA to have specific sequence homology to the endogenous DNA at the desired integration site and also carefully selects the transfer vector condi-tions. This targeted homologous recombination at a precise chromosomal position provides an approach to very subtle genetic modification of an animal or can be used to produce knockout mice (to be discussed later).

A modification of the procedure involves the use of hematopoietic bone marrow stem cells rather than pluripotent embryonic stem cells. The use of ES cells results in changes to the whole germ line, while hematopoietic stem cells modified appropriately are expected to repopulate a specific somatic cell line or lines (more similar to gene therapy).

The science of cloning and the resulting ethical debate surrounding it is well beyond the scope of this chapter. Yet it is important to place the concept of animal cloning within the pharmaceutically important context of transgenic animal production. The techni-que of microinjection (and its variations) has formed the basis for commercial transgenic animal produc-tion. While successful, the microinjection process is limited to the creation of only a small number of transgenic animals in a given birth. The slow process of conventional breeding of the resulting transgenic progeny must follow to produce a larger number of transgenic animals with the same transgene as the original organism. To generate a herd (or a flock, etc.), an alternative approach would be advantageous. The technique of nuclear transfer, the replacement of the nuclear genomic DNA of an oocyte (immature egg) or a single-cell fertilized embryo with that from a donor cell is such an alternative breeding methodology. Animal “cloning” can result from this nuclear transfer technology. Judged Science’s most important

breakthrough of 1997 (Sailor, 1997), creating the sheep Dolly, the first cloned mammal, from a single cell of a 6-year old ewe was a feat many had thought impossible. Dolly was born after nuclear transfer of the genome from an adult mammary gland cell. Since this announcement, commercial and exploratorydevelopment of nuclear transfer technology has progressed rapidly with various species cloned. It is important to note that the cloned sheep Dolly was NOT a transgenic animal. While Dolly was a clone of an adult ewe, she did not possess a transgene. However, cloning could be used to breed clones oftransgenic animals, or to directly produce transgenic animals (if prior to nuclear transfer, a transgene was inserted into the genome of the cloning donor). For example, human factor IX (a blood factor protein) transgenic sheep were generated by nuclear transfer from transfected fetal fibroblasts (Schniecke et al., 1997). Several of the resulting progeny were shown to be transgenic (i.e., possessing the human factor IX gene) and one was named Polly. Thus, animal cloning can be utilized not only for breeding, but also for the production of potential human therapeutic proteins and other useful pharmaceutical products.