as ten-year-old Rucha leaned forward in the seat and pumped the pedals. “Hold tight, Vishnu! I will fall!” she shouted to the boy, who ran behind, steadying the bicycle. For the past two weeks he had been teaching her to ride. “Don’t worry, Ruchaji, you are doing well,” he puffed. For a few moments he let go of his hold and Rucha was on her own. Of course, she did not know it and rode along smoothly. “Vishnu, stop the cycle. I want to get off,” Rucha called. “Use the brake!” Vishnu called out. His voice came from some distance away and, Rucha realised that he was not holding the bicycle any more.

. And, before Vishnu could reach her, the bicycle wobbled, tilted to one side and Rucha was deposited into a bush. Shaken but unhurt, Rucha cried

, “I told you to hold tight. I told you I would fall!” she glared at Vishnu. “But, Ruchaji, you were riding quite well and anyway you have to learn riding without someone holding the cycle, isn’t it?” Vishnu explained. “See I fell, didn’t I?” Rucha would not be pacified. 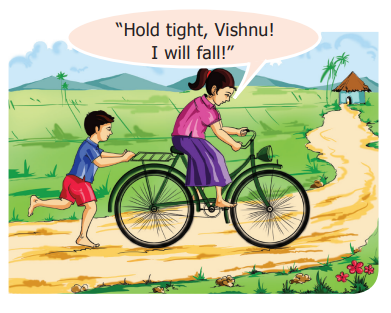 into the house to complain. You fell. Doesn’t matter,” said her mother calmly. “We all do when we are learning to ride a cycle. At least you are not hurt.” “The bicycle is too big for me,” Rucha complained. “When I am in the seat, my toes

touch the ground.” Her mother explained to her that she found nothing wrong with it. Riding a cycle of that height was right for her. After all, she was growing up! “Mummy, may I ride the bicycle?” asked Seema, Rucha’s sister, younger to her by three years.

“No, Seema, you cannot,” Rucha cut in before her mother could answer. “When it is so high for me, how can you sit? You are much shorter.” No amount of pleading helped.

There was a considerable contrast between the two sisters. Rucha was very protective of her younger sister. She was overprotective with her. Rucha herself had been overprotected.

She seldom did things

. Even in running and playing, she would be conscious of her movements. Seema, on the other hand, was bold and prone to taking risks.

Next week, inter-house badminton matches were to be held in the school. Rucha was in the senior team. She gave up other activities and practised with her friends.

,” they told her on the day of the match.

Aruna, a very good player of their house, was expected to win. And she did. Rucha and her opponent were almost evenly matched and Rucha lost the game by a couple of points.

Their house stood second in the overall tally. “I can’t seem to win,” said Rucha remorsefully. “You played all right,” Aruna consoled her. “The time when your opponent was at the net, if you had hit just a little harder over her head, you could have won that point.”

“I know, I know,” replied Rucha, “but somehow I always make such mistakes."

"You must practice more. That is all,” Aruna told her.

”I suppose so,” Rucha replied

“Cheer up now,” Aruna told her. “At least you tried. I say, the inter-school sports meet is coming up. You are in the school’s relay team, aren’t you?”

“I will probably make everyone lose the race,” Rucha said, still gloomy.

“Don’t think that way,” Aruna pleaded with her. "You run fast. We need you.”

Rucha finally agreed to stand in if no better person could be found. Meanwhile, she would train with the rest of them under the new PT instructor, Prakash Sir.

about sports and drove the children hard— praising, scolding, correcting but mostly encouraging them.

“Rucha, you are nimble and light. You can do better than that,” he told her often.

“How can I do that?” Rucha confided to Aruna. “I will most probably fall.”

“Don’t be silly. We are all trying to better ourselves. You must try too,” Aruna told her.

in their team.” Shabnam, their teammate informed them. “Has anyone heard about her? It seems they call her P.T. Usha!”

Prakash Sir overheard this conversation. He took a quick decision. “The girls’ relay team, gather here in five minutes,” he called out. All the girls came together. “Girls, I have been watching you all. You need some more practice, more time on the field. You are not doing enough,” he told them.

protests greeted this. “All right, all right, girls, calm down,” he held up his hands, placating them. “Tell me, what is your goal. To

the race, isn’t it? Not just to make an attempt. To win! Are we agreed?”

The girls murmured their assent.

“I know you have been training. You just need to give a little extra push to your efforts to win. I know all of you have it in you,” he told them.

“Right, let us start with these exercises.” He showed them exercises that would allow their legs to stretch more, stride faster. Then he trained them in the skill of passing the baton without losing speed. “Don’t slow down when you near your next team member,”

. Only when the baton has left your hand, you slow down. Do you understand? And you, who are going to receive the baton, also keep in motion, jogging. All right enough for today. Report to me same time tomorrow again.” Then turning to Rucha, he said, “I want a word with you. You are apt to slow down after starting well,” said Prakash Sir. “Don’t do that. Maintain your speed,” he advised her.

“Sir, I am not very good,” Rucha said dolefully.

“No self-doubts, Rucha! This is exactly what I have been wanting to tell you. You must have a

. Don’t even think of losing. See yourself winning! Think to win! Only to win! You can do it, I can feel it.” Rucha went home with Prakash Sir’s words ringing in her ears. 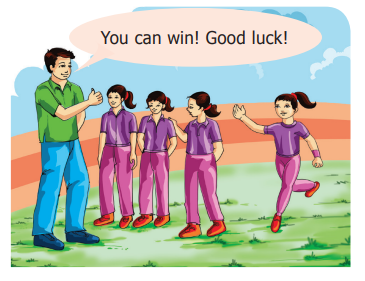 The next few days he saw the girls training extra hard. Prakash Sir was never far, even as he trained other children.

The day of the sports meet

and the children piled into buses to reach the venue. There was laughter and a great deal of joviality as Prakash Sir had seen to it that they were fit and relaxed as well. The stadium, where the meet was being held, bustled with great activity. Children from several schools were moving around checking out the different venues where particular events were to be held. Prakash Sir collected the schedule and gave the girls

instructions. The Principal of the host school inaugurated the meet with a short speech and also introduced the participating schools. Then the events started. Rucha and most of the other children of their school easily got through the heats to enter the finals scheduled for the following day. The next morning, after a few individual events, it was time for the girls’ relay race. Four schools had entered the finals. Rucha, Aruna, Shabnam and Neelam were Team B.

“Girls, you are a good team. You can win! Go ahead and show your

Shabnam, a tall girl, was their first runner. She would pass the baton to Neelam, Neelam would pass it to Aruna, and Aruna to Rucha, who would be finishing the race for them. The

blew and the first runners were off. With her long strides, Shabnam gave the team a marginal lead. But by the time Neelam had passed the baton to Aruna, both Team A and D had drawn level with her. Then, the runner of Team D fumbled and dropped the baton. Aruna ran for all she was worth, just managing to keep abreast of the runner of the Team A.

Finally, the baton was in Rucha’s hand. She had already noted with dismay that she was pitted against ‘P.T. Usha’ of Team A

the thought had flashed through her mind. She had quickly put that thought aside, and when the baton was passed to her, she was more than ready. She heard the shouts of her schoolmates, “Rucha, come on! Ru...cha! Ru...cha!” Out of the corner of her eye, Rucha saw ‘P.T. Usha’ trying to overtake her.

, she thought, ‘Not again!’ Then Prakash Sir’s words came to her: ‘Think to win!’ The next moment, Rucha was conscious of nothing except the tape at the finishing line which she had to reach. Totally absorbed, she ran, she lost track of time and distance. 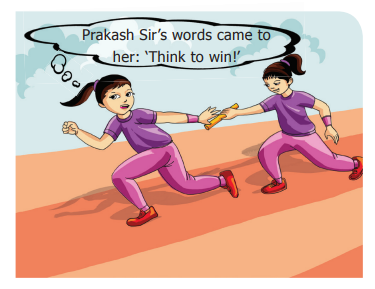 She ran on, not conscious of the fact that the race was over till Aruna called out to her,

And she was hugging and kissing her. Prakash Sir was beaming at her and everyone was applauding her. Even ‘P.T. Usha’ came over to shake her hand. 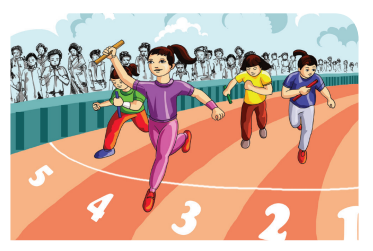 “I thought I was fast, but you were simply

” she shook hands with her. It is always a proud moment for the winner of a medal when she is called to the victory stand, but for Rucha, it had a double meaning. She had overcome her hesitations and denials. She could win whenever she chose to!