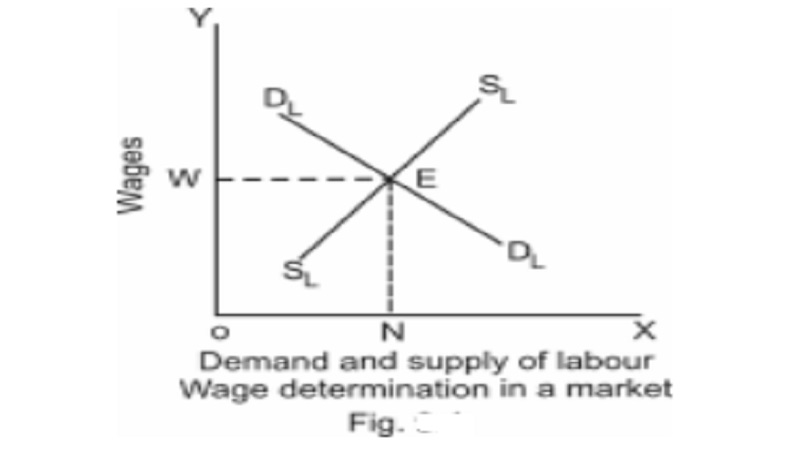 Wages are the reward for labour. There are two main kinds of wages. (1) money wages and (2) real wages. Money wages are also known as nominal wages. Real wages refer to the commodities and services which the money wages command. They depend mainly on the purchasing power of money, which in turn depends upon the price level. The standard of living of workers in a country depends upon the real wages. Further, a farm worker may get low money wages. But if he gets free board and lodging, we must take that also into account while considering real wages.

Some of the important recent theories of wages are

The subsistence theory of wages : According to this theory, the wages that are paid to a worker must be just enough to cover his bare needs of subsistence. If the workers are paid less than the subsistence wage, there will be starvation and death and it will result in shortage of supply of labour.

Criticism : The main criticism against the theory is that it is based on the assumption that an increase in wages will result in an increase in population. Man is different from an animal. Besides bare needs, he needs some comforts. This theory does not take note of that. And it is one sided. It ignores the forces operating on the side of demand. This theory is based on bad ethics.

The Wages Fund Theory : According to Wages Fund Theory, 'wages depend upon the proportion between population and capital'. The term 'capital' in the context refers to the fund set apart for payment of wages. And the word 'population' refers to workers. If the supply of workers increases, wages will fall and vice versa.

Criticism : The theory assumes that an increase in wages will result in an increase in population. But there is no direct relationship between the two. Further, it tells that if wages rise, profits will fall. This is not correct because during periods of good trade, both wages and profits will rise.

Criticism : The main criticism against the theory is that it considers wages as residual payment. But wages are in the nature of advance payment and they have to be paid first. Normally, profits are taken at the end.

As an employer goes on employing more and more units of labour, its marginal product will fall because of the law of diminishing marginal returns. So he will employ labour upto the point where the wages he pays are equal to the value of the marginal product of labour. All units are assumed to be uniform. So the productivity of the marginal unit of labor determines the rate at which wages are to be paid to all units of labour.

Criticism :1. Every product is produced by the joint effort of all factors of production. It is rather difficult to measure the productivity of each factor in terms of the product produced. The difficulty is more in measuring the marginal productivity of those who render services (eg. doctors, actors and lawyers) ; 2. it is based on the assumption of perfect competition. But in the real world, we have only imperfect competition ; 3) under monopoly, wages will be lower than the marginal product of labour because there is exploitation of labour ; 4) wages are in the nature of advance payment. So an employer will deduct some amount to cover the interest on capital and pay the workers wages which are lower than their marginal product. So wages are the discounted marginal product of labour 5). The theory should not be used to justify the low wages in an economy and the inequalitites of incomes. Wages might be low because of exploitation of labour. In spite of the above criticism, 'the doctrine throws into clear light the action of one of the causes that govern wages'. (Marshall).

The Market Theory of Wages

The market theory looks at wages as the price of labour. Like all other prices, wages are determined by the market forces of supply and demand.

The supply of labour generally refers to the total number of people available for employment. Some types of labour require long periods of training. During that long period, workers have to sacrifice their earnings. We have to take note of the foregone earnings while estimating the cost of labour which determines its supply.

The demand for labour

In a competitive labour market, equilibrium will be established at the wage that equates the demand for labour with the supply of labour.

Diagramatic illustration of determination of wages in a market

If demand for labour is high relative to its supply, wages will be high and vice versa. On the supply side, there are many imperfections. There is geographical immobility of labour. There may be shortage in the supply of certain categories of labour (eg. doctors, engineers). In some industries, the supply of labour is controlled by trade unions.

The Bargaining Theory of Wages

The bargaining theory of wages takes note of the influence of trade unions on wages through collective bargaining. According to the theory, the level of wages in an industry depends on the bargaining strength of the trade union concerned. The strength of a trade union depends upon many things like the size of its membership, the size of its 'fighting fund', and its ability to cause dislocation in the industry and the economy through strike. During periods of full employment and good trade, trade unions will be in a strong position and during depression marked by bad trade and mass unemployment, trade unions will be in a weak position.

A trade union may increase wages by restricting the supply of labour. For example, it may insist that only members of a trade union should be employed. This is known as closed shop policy. It may threaten that it will go on strike if a minimum wage is not paid.