The early uprisings did not succeed in threatening the British in India. It took the Revolt of 1857 to bring home to the Company and the British thought that their rule was not accepted to a large section of the population.

The early uprisings did not succeed in threatening the British in India. It took the Revolt of 1857 to bring home to the Company and the British thought that their rule was not accepted to a large section of the population. The Revolt of 1857 was a product of the character and the policies of colonial rule. The cumulative effect of British expansionist policies, economic exploitation and administrative innovations over the years had adversely affected the positions of all rulers of Indian states.

Causes of the Revolt

* The most important cause of revolt 1857 was a popular discontent of the British policy of economically exploiting India. This hurt all sections of society. The peasants suffered due to high revenue demands and the strict revenue collection policy.

* Policies of doctrine of lapse, subsidiary alliance and policy of Effective Control created discontentment among people. Annexation of Awadh (Oudh) proved that even the grovelling loyalty can't satisfy British greed for territories.

* The conversion activities of Christian missionaries were looked upon with suspicion and fear. The priests and the maulavis showed their discontent against the British rule.

* Abolition of practices like sati, female infanticide, support to widow remarriage and female education were seen by many as interference in their Indian culture by the Europeans.

* The Indian sepoys were looked upon as inferior beings and treated with contempt by their British officers. They were paid much less than the British soldiers. All avenues of the promotion were closed to them as all the higher army posts were reserved for the British.

The immediate cause was the introduction of new Enfield Riffles in the army. The top of the cartridge of this rifle was to be removed by the mouth before loading it in the rifle. The cartridges were greased by the fat of pig and the cow. The Indian sepoys believed that the British were deliberately attempting to spoil the religion of both the Hindus and the Muslims because while the Hindus revered the cow, the Muslims hated the pig. The soldiers, therefore, determined to refuse their service and, ultimately revolted. Thus, the primary and the immediate cause of the revolt was the use of the greased cartridges.

The Outbreak of the Revolt

On 29 March 1857 at Barrackpur (near Kolkata) Mangal Pandey, a young Sepoy from Bengal Regiment, refused to use the greased cartridge, and shot down his sergeant. He was arrested, tried and executed. When this news spread many sepoys revolted. 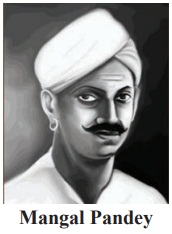 Course of the Revolt

On 10 May 1857, the Sepoys of the third cavalry at Meerut openly revolted by swarming the prisons and releasing their comrades. They were immediately joined by the men of the 11th and 20th Native Infantries, and they murdered some English officers and then marched to Delhi. The arrival of Meerut sepoys at Delhi on 11th May and declared of Bahadur Shah II as the Emperor of India. 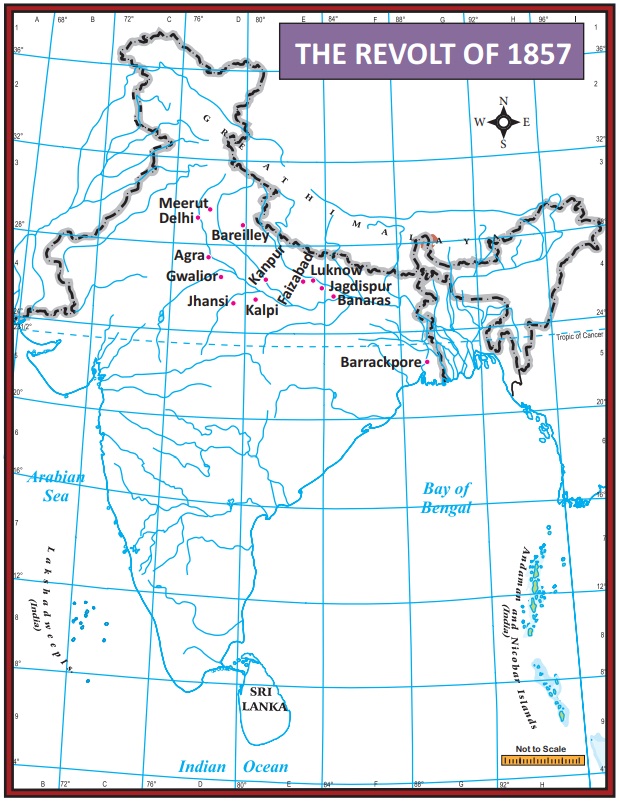 Delhi became the centre of the Great Revolt and Bahadur Shah, its symbol.

The revolt spread quickly. There were mutinies at Lucknow, Kanpur, Jhansi, Bareilly, Bihar, Faizabad, and many other places in north India. Many of them found that it was a good opportunity to burn the papers of their landlords. Many others whose titles and pensions were abolished by the British who participated in it, inorder to take revenge.

In Central India the revolt was guided by Rani Lakshmi Bai of Jhansi. She was one of the greatest patriots of India. Sir Hugh Rose occupied Jhansi. Rani Lakshmi Bai fled from Jhansi and joined hands with Tantia Tope who had assumed the leadership of the rebel army at Gwalior. But the British captured Gwalior in June 1858. Rani was killed in the battle. Tantia Tope fled away but was captured and later executed. According to the British historians, present at the time of revolt, Rani Lakshmi Bai was the best and the bravest among the leaders of the Revolt of 1857.

Suppression of the Revolt

Lord Canning, the governor- general took immediate steps to suppress the revolt. He collected the forces of Madras, Bombay, Sri Lanka and Burma. On his own initiative, he called the British army which was deputed to China by Britain to Calcutta. He ordered the loyal Sikh army to proceed to Delhi immediately. The British regained their lost positions very soon.

Delhi was recaptured by General John Nicholson on 20 September, 1857 and deportation of Bahadur Shah II to Rangoon where he died in 1862. Military operations with the recovery of Kanpur were closely associated with the recovery of Lucknow. Sir Colin Campbell occupied Kanpur. Nana Saheb was defeated at Kanpur and escaped to Nepal. His close associate Tantia Tope escaped to central India, was captured and put to death while asleep. The Rani of Jhansi had died in the battle-field. Kunwar Singh, Khan Bahadur Khan were all dead, while the Begum of Awadh was compelled to hide in Nepal. The revolt was finally suppressed. By the end of 1859, British authority over India was fully re-established. 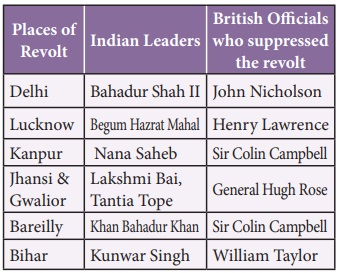 The Causes for the Failure of the Revolt

Various causes were responsible for the failure of the revolt.

* The rebel leaders were no match to the British Generals. Rani Lakshmi Bai, Tantia Tope and Nana Saheb were courageous but they were not good generals.

* The modern educated Indians did not support the Revolts as they believed that only British rule could reform Indian society and modernize it.

* The British managed to get the loyalty of the Sikhs, Afghans and the Gurkha regiments. The Gurkhas actually helped the British in suppressing the revolt.

* The British had better weapons, better generals, and good organisation.

Consequences of the Revolt

* The Revolt of 1857 marked a turning point in the history of India. It led to changes in the system of administration and the policy of the Government.

* The administration of India was transferred from the East India Company to the British Crown through the ‘Queen’s Proclamation’ in 1858.

* The governor general was given the title of viceroy.

* The Board of Directors and the Board of Control were replaced by the Council of 15 members headed by the Secretary of State to supervise Indian affairs.

* The Indian Army was thoroughly reorganised. More Britishers were employed in the army.

* The British military policy came to be dominated by the idea of ‘divide and counterpoise’.

Infact, the Revolt of 1857 played an important role in bringing the Indian people together and imparting them the consciousness of belonging to one country. The Revolt paved the way for the rise of the modern national movement. It was at the beginning of the twentieth century that the 1857 Revolt came to be interpreted as a “planned war of national independence”, by the Historian V.D. Savarkar in his book, 'First War of Indian Independence'.