Let’s read this play extract to know the happenings. (Outside Wilson’s shop in Saxe-Coburg Square. Holmes is walking up and down. Now and then he hits the ground outside the shop with his walking stick. Then he knocks on the door of the shop. Spaulding opens the shop door. The legs of his trousers are dirty.) 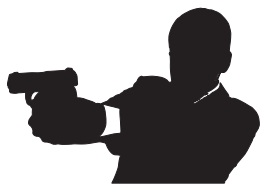 Wilson says that he runs a pawnshop. One day in his shop, his assistant, Vincent Spaulding, showed an advertisement in the newspaper that announced an opening in the Red-Headed League. The announcement promised a salary of four pounds a week. Spaulding urged Wilson to apply. The timid red - haired pawnbroker did so. Wilson was accepted into the League by Mr. Duncan Ross, the head of the League.

He learned that the nominal duties consisted only of his coming to the office from 10:00 a.m. until 2:00 p.m. each day and copying out the Encyclopaedia Britannica in longhand. This he did for eight weeks until one day he arrived at the office to find it closed, with a notice on the door that the Red-Headed League had been dissolved. He was so disturbed by the thought that someone had been playing a practical joke on him that he came to Holmes for a solution. Holmes promises to look into the case and Wilson leaves. Holmes and Dr. Watson move to Wilson’s shop in Saxe-Coburg Square at once.

Let’s read this play extract to know the happenings.

(Outside Wilson’s shop in Saxe-Coburg  Square.  Holmes is walking up and down. Now and then he hits the ground outside the shop with his walking stick. Then he knocks on the door of the shop. Spaulding opens the shop door. The legs of his trousers are dirty.) 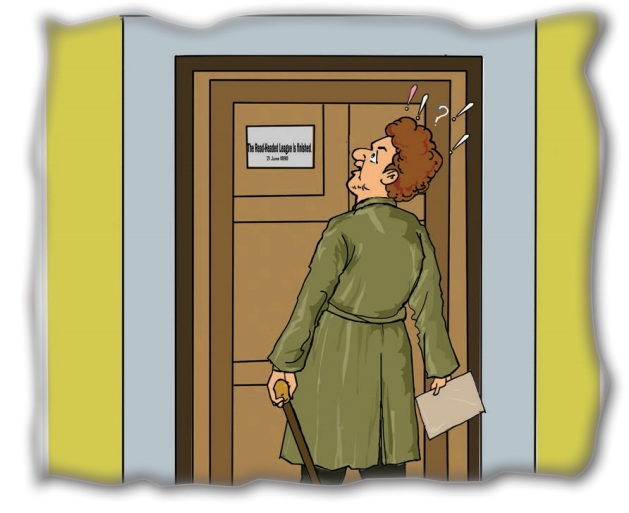 You wanted to see him.

at the road behind Saxe-Coburg Square. You had to go to work.

( The strong room at a bank, with many boxes and crates in it. Holmes, Watson, Jones and a policeman are on stage hiding behind some boxes.)

They see a light coming through the stone floor. Suddenly the stones give way. First a hand with a gun comes out of the ground, then another hand; Spaulding comes out followed by Ross.)

(With his light, Holmes comes out from behind his box, and hits Spaulding’s arm. Now the gun is on the ground. Ross quickly gets back into the tunnel. Jones wants to stop him, but he cannot.)

( Sherlock Holmes’s study. Holmes and Watson are sitting on chairs.)

Holmes  : There was never any red-headed league. The villains wanted Wilson away from the shop for some hours every day. Then Clay saw the colour of Ross’s hair and thought of a Red-Headed League! So when Wilson went to work in their office every day, they had time to make their tunnel. Very clever! 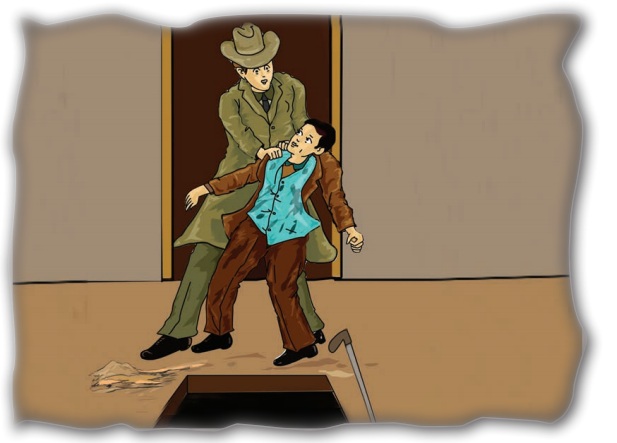 Watson    : So Spaulding is John Clay, the notorious thief. When did you first know that?

Holmes    : I suspected when Spaulding was happy to work for half-wages. ‘Why? I thought. Spaulding often went down to the cellar. ‘What’s he doing down there?’ I thought. ‘Tunnels! Is Spaulding making a tunnel?’ I thought. ‘To another building?’ Watson, you saw me hitting the ground with my stick, outside the shop.

Watson    : Yes… now I understand. You wanted to know if the cellar was in front of the shop.

Holmes   : Yes, I did. And it wasn’t. The cellar was behind the shop. Then I saw the man ‘Spaulding.’ I recognized him immediately. Did you see his trousers? They were dirty, Watson! Why? Because making a tunnel is dirty work!

Holmes   : Then I went into the next street, at the back of the shop. And what did I see? The Bank!

Holmes    : ‘Why is that young man making a tunnel?’ I thought. To get into the bank’s strong room, of course!

Holmes    : Because they closed the offices of the Red-Headed League. ‘The tunnel must be ready,’ I thought. And Saturday is a good day. The bank does not open on Sunday. It would have given the thieves enough time to get away.

Watson    : (laughing) But they didn’t get away, Holmes. You’re very clever.