The Constitution of India

THE CONSTITUTION OF INDIA

• To know about the Cons titution of India

• To recognise the formation of our Cons titution

• To know the salient features of our Cons titution

The Lesson speaks about the formation of the constitution of India. It gives guidelines to govern the country, while ensuring the fundamental rights and duties of the citizens and how it protects them.

Yazhinian and Sudaroli are brothers. Yazh is student of standard six and Sudar is in standard four. Yazh was preparing for his class test. Sudar after completing his home assignments was watching an animated series on television. Sudar was watching it but the noise level disturbed Yazh. Sudar was totally engrossed in the series and laughed and clapped loudly. Yazh could not concentrate on his lessons.

Yazh complained to his father that Sudar did not decrease the volume of the television in spite of requesting him several times. Yazh made it clear that he had a class test the following day.

“Isn’t your brother preparing for his class test? Weren’t you wrong in troubling him?” continued his father. 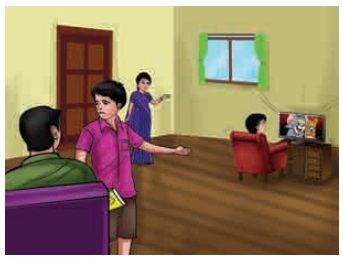 “I was watching the TV. Yazh kept disturbing and stopped me from watching it.” said Sudar.

“Studying for the test and watching television are not the same” said his father.

But Sudar was not ready to accept the fact. Sudar was consistent that he had all rights to watch a film as much as Yazh had the right to study.

His father admitted that both had equal rights. But one must not hinder another’s freedom. Sudar didn’t realise the fact that he was very stubborn.

“Look Sudar. You have all rights to watch the film” said his father.

“Similarly, Yazh also has the right to listen to his favourite song on TV Coundn’t he?”

“How can that happen? When I watch the television he cannot do that.”

“When you can watch a film by increasing its volume, Yazh can also hear music loudly.” said father.

“How will I watch the movie?”.

“Oh! I didn’t think of it. Okay dad, I will not watch the movie while Yazh studies.” .

“No my child. You can watch the movie without causing trouble to anyone,” .

“Don’t be angry Yazh. You study and I promise I will not disturb you.”

Yazh smiled and patted Sudar’s back and left the place.

Sudar’s mother was watching everything silently. She said,” Even to run a small family don’t we need to follow so many rules and regulations? How much more of that will we need to administer a country?” she exclaimed.

“It is an ocean Deepa. In order to administer people who follow different religions, speak different languages and belong to different castes and culture and treat everyone equally, we need to have a good code of laws and guidelines which we call as ‘The Constitution of India.’

The next day Sudar and Yazh went to school. It was the Republic Day also.

The celebration was a jubilant. The students and teachers were standing in line around the flag post. Immediately after the hoisting of the flag, a discussion was held with the chief guest for the day, Mr. Arumugam, an expert in social sciences.

“Wish you the same Sir.”

“Do you know why do we celebrate the Republic Day?”

“Our Constitution was framed and came into existence from 26th January 1950. That is why every year we observe this day as the Republic Day.” said the history teacher Malarmathi. 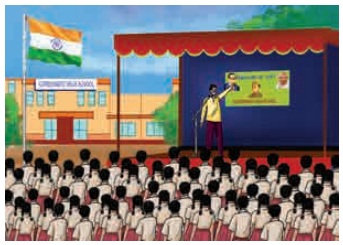 “Yes, it is true. There are other reasons why this constitution came into existence on 26th January 1950. When the Congress met at Lahore in 1929, the members of the Congress unofficially declared the same day as the Day of Poorna Swaraj or the Day of complete self governance. The next year, 26th January 1930 was celebrated as the Independence Day. That day has been observed as our Republic Day.”

“What do you mean by the “Constitution of India” asked Nathar.

“Before that, let me ask a few questions. You answer me. Then I will explain in detail about the constitution of India.”.

(The students were prepared to answer the questions)

“Are you following any rules and regulation at home?”

“Are you following any rules at school?” “Yes sir”

“Are both of them the same or different?” “Mostly, they are different”

“Is it necessary to follow certain rules in public places?”

“Why is it necessary?”

“We should not disturb anybody in public” said Tamilselvi.

“It’s true. Also no one should disturb us”said Selva

“Yes, I do accept it. But what if someone compels you to follow some rules? How would you feel?”

“It would be difficult to do so.”

“How do you feel when you are asked to make your own rules?”

“We would be proud and pleased to obey our own rules.”

(Everyone agreed and nodded their heads) 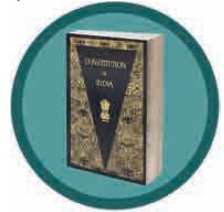 “The Constitution is an authentic document containing the basic ideas, principles and laws of a country. It also defines the rights and duties of citizens. The laws governing a country originate from the consitutition. Every country is ruled on the basis of its constitution”

“What are the things that make the constitution of India?” asked Deepika.

“When did they begin to frame the constitution?” asked Christopher. 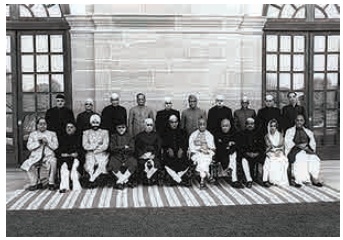 “In 1946, nearly 389 members of the constituent Assembly who belonged to different parties from different places came together to frame the Constitution of India. The Chairman of the committee was Mr. Rajendra Prasad.”

“Who were the other significant members in the Constituent Assembly?” 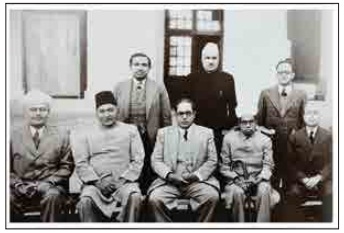 “How many women members were there in the Constituent Assembly?

“15 women members were in the Constituent Assembly”

'The Father of the Constitution of India’ is Dr.B.R. Ambedkar.

“The Drafting committee was formed with eight members and its Chairman was B.R. Ambedkar; B.N.Rao was appointed as an advisor. The committee met for the first time on 9th December 1946. On the same day, the drafting of constitution of India started.”.

“How did they form the Indian constitution?”

“The constitutions of nearly 60 countries including the UK, USA,former USSR, France , Switzerland etc., were thoroughly examined and their best features have been adopted by our constitution.”

“Did they draft it in a short span of time?”

“No, nearly 2000 amendments were made before the draft was finalised”

“When did they complete this work?”

“The constitution was accepted by the Constituent Assembly. So, 26th November is celebrated as the Day of the Constitution. isn’t it ?” said Karthikeyan 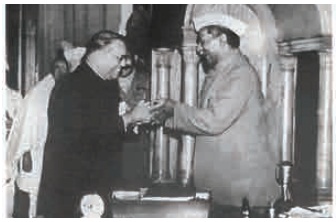 “How much was spent to frame the constitution of India?” asked Nathar.

“What are the objectives of the Constitution?”

“The Preamble of our constitution stresses on the justice, liberty, equality and fraternity.”

“What is a Preamble?” 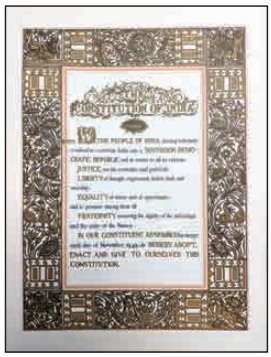 “The preface of the constitution is the Preamble. According to it, India is a Sovereign, socialist, Secular democratic republic.”

“What does it mean by ‘Sovereign’?”

“The constitution has granted the people the right to rule. The members of the parliament and the legislative assembly are elected by the people. The right to decide is only in the hands of the representatives. Sovereignty refers to the ultimate power of the country.”

“What is the meaning of “Secular?”

“Law allows all the citizens of a country, the right to follow different faith and religious beliefs. All citizens enjoy the freedom of worship. The country does not have a religion of its own. All the religions in our country hold the same status.”

“The Government of India rules through the Parliament, doesn’t it?”

“Yes, the Constitution of India provides a Parliamentary form of Government, both at the centre and the state. In a Parliamentary System, the Executive is collectively responsible to the Legislature. The party which has the majority forms the government.”

“What are fundamental rights?”

“Fundamental rights are the basic human rights of all citizens.” 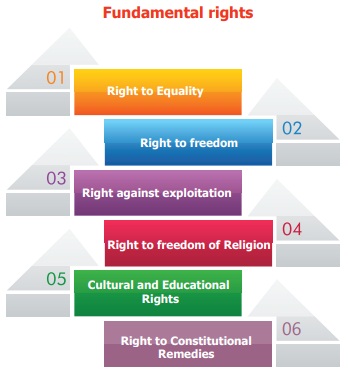 “You mentioned about Directive Principles. What do you mean by that?” “There are certain guidelines to be followed while the governments frame law. Though these are not mandatory, they should be taken into account.”

“What is Universal Adult Franchise?”

“Every Indian citizen has the right to vote when they attain 18 years of age, irrespective of any caste, religion, gender or economic status.”

“Like fundamental rights, every citizen will have duties too, won't they?”

“Yes, There are duties respecting the National flag and National Anthem, respect and protect the Constitution, follow our great leaders who fought for our freedom, to protect our country, readiness to serve our country if necessary, treating everyone as brothers irrespective of their castes, religions, languages, races etc., to conserve our ancient heritage, and conserve natural elements like forests, rivers and lakes and fauna, to develop science, humanity and feelings of reformation to avoid non-violence and protect government property, parents or guardians providing educational opportunities to children between 6-14 years etc., have been added as our duties” Mr.Arumugam concluded his discussion.

The original copies of the Cons titution of India (Hindi,English) are preserved in special Helium filled cases in the Library of the Parliament of India.

• The Chairman of the Drafting Committee Dr. B.R. Ambedkar was considered the Chief architect.

Prepare a lis t of your immediate duties?

1. Democracy - a type of government in which representatives are elected by the people of that country.

2. Drafting - a Committee set up to Committee prepare the draft of th Constitution

3. Preamble - an introduction to a book or a written  document.

4. Republic - a country with an elected head of state

5. Secular - a state which does not discriminate anyone on  religious grounds

6. Socialist - equal distribution of a country’s wealth and equal opportunities in all fields.

7. Sovereign - an independent country not subject to any external power or influence.

• 26th January is observed as our Republic Day.

• The Constitution is an authentic document containing the basic ideas, principles and laws of our country

• The father of the Constitution of India is Dr. B. R Ambedkar.

• The Preamble of our Constitution stresses on justice, liberty, equality and fraternity.

• According to the Preamble, India is a sovereign, socialist, secular, democratic republic

• All citizens enjoy the freedom of worship

• The Executive is collectively responsible for the legislature

• Fundamental rights are the basic human rights of all citizens.

• Directive principles are certain guidelines which are not mandatory

• Universal Adult Franchise is every Indian citizen’s right to vote when they attain 18 years of age.

• Every citizen has certain duties too.

The Constitution of India

Let us learn about The Constitution of India

Step 2: Click the GO button in that page. Here we get some questions. Click any question to learn the related concepts.

Step 3: To know more , click the next button in the lower right corner. Now we get more information.

Step 4: To go to the next concept , click button in the upper right corner . 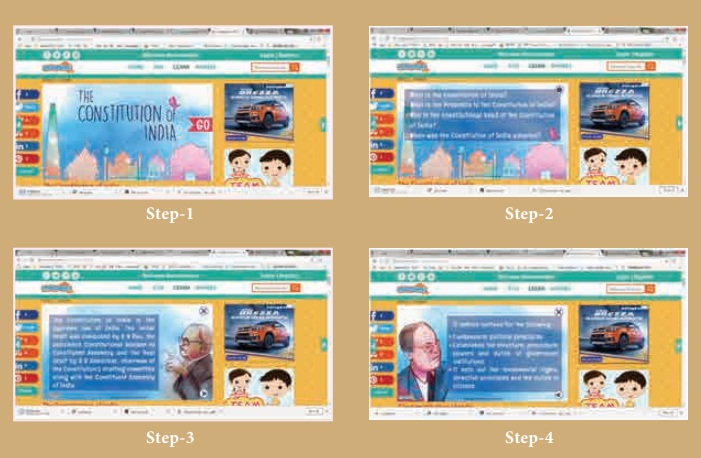