THE BALLAD OF FATHER GILLIGAN 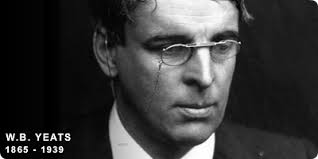 THE BALLAD OF FATHER GILLIGAN

Was weary night and day;

For half his flock were in their beds,

Or under green sods lay.

Once, while he nodded on a chair,

At the moth-hour of eve,

Another poor man sent for him,

And he began to grieve.

'I have no rest, nor joy, nor peace, For people die and die';

And after cried he, 'God forgive! My body spake, not I!'

He knelt, and leaning on the chair

He prayed and fell asleep;

And the moth-hour went from the fields,

And stars began to peep.

They slowly into millions grew,

And leaves shook in the wind;

And God covered the world with shade,

And whispered to mankind.

Upon the time of sparrow-chirp

When the moths came once more.

Stood upright on the floor.

'Mavrone, mavrone! the man has died While I slept on the chair';

He roused his horse out of its sleep, And rode with little care.

He rode now as he never rode, By rocky lane and fen;

The old priest Peter Gilligan In grief swayed to and fro.

'When you were gone, he turned and died As merry as a bird.'

The old priest Peter Gilligan He knelt him at that word.

'He Who hath made the night of stars For souls who tire and bleed,

Sent one of His great angels down To help me in my need.

'He Who is wrapped in purple robes, With planets in His care,

Had pity on the least of things Asleep upon a chair.'

THE ROSE 1893 By William Butler Yeats poem lyrics. Easy summary meaning. Selected sweat best popular poem for School and college student
THE MAN WHO DREAMED OF FAERYLAND
THE ROSE OF THE WORLD , PEACE ,BATTLE
THE DEDICATION TO A BOOK OF STO-RIES SELECTED FROM THE IRISH NOV-ELISTS
TO THE ROSE UPON THE ROOD OF TIME
THE PITY OF LOVE, THE SORROW OF LOVE, WHEN YOU ARE OLD,A DREAM OF DEATH
TO IRELAND IN THE COMING TIMES
THE BALLAD OF FATHER GILLIGAN
CUCHULAIN'S FIGHT WITH THE SEA
FERGUS AND THE DRUID
A CRADLE SONG, THE LAKE ISLE OF INNISFREE, A FAERY SONG
THE TWO TREES
THE COUNTESS CATHLEEN IN PARADISE