Home | | The Diversity of Fishes: Biology Evolution and Ecology | Subclass Coelacanthimorpha: the living coelacanths - Primitive bony fishes
Posted On :  07.08.2017 10:06 am 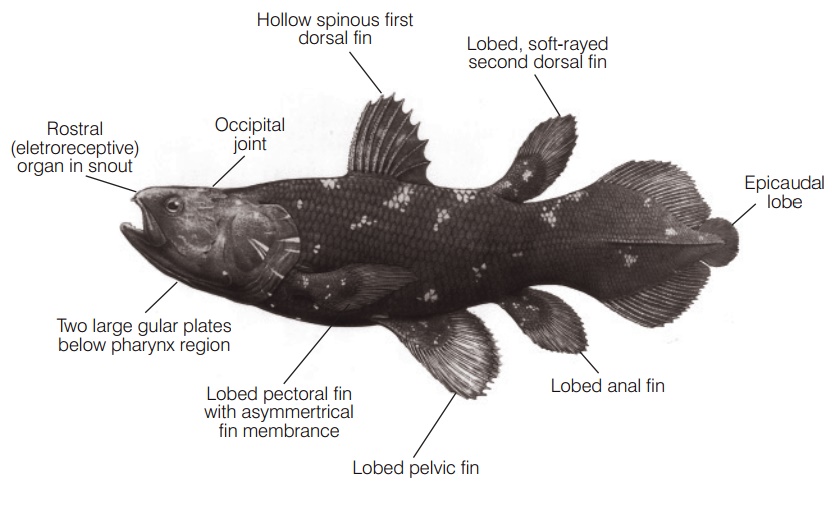 If you open an ichthyology text published prior to World War II (e.g., Günther 1880; Jordan 1905; Norman 1931), you will find passing mention of a relatively obscure group of extinct fishes that represented a side branch of the lineage that presumably gave rise to the tetrapods.

If you open an ichthyology text published prior to World War II (e.g., Günther 1880; Jordan 1905; Norman 1931), you will find passing mention of a relatively obscure group of extinct fishes that represented a side branch of the lineage that presumably gave rise to the tetrapods. These were the coelacanths, conservative sarcopterygian fishes that had gone unchanged in many respects since the Devonian (Jarvik 1980; Forey 1998). Their fossil record stretched nearly 300 million years, from the Middle Devonian, 360 mybp, to near the end of the Cretaceous, 80 mybp, when they and then the dinosaurs disappeared.

Imagine the world’s surprise when, just before Christmas 1938, a living coelacanth was trawled from a depth of 70 m off the east coast of South Africa (Smith 1939, 1956; Weinberg 2000). Latimeria chalumnae, described by J. L. B. Smith, retains many of the characteristics that had defined the coelacanths since the establishment of their lineage: a thin bony layer encasing the vertebral spines and fin rays (the name coel-acanth, meaning “hollow spines”, refers to the hollow nature of the fin rays that support the tail); an unconstricted and unossified notochord, modified as a strong-walled elastic tube; fleshy, lobed pectoral, pelvic, anal, and second dorsal fins (=Sarcopterygii); a symmetrical, three-lobed, diphycercal tail with an epicaudal fringe portion extending beyond the midline; relatively large, thick, bony scales; a double gular plate under the lower jaw; a dorsal intracranial articulation (a joint in the braincase that functions to increase gape size); and numerous other osteological features (Fig. 13.7). 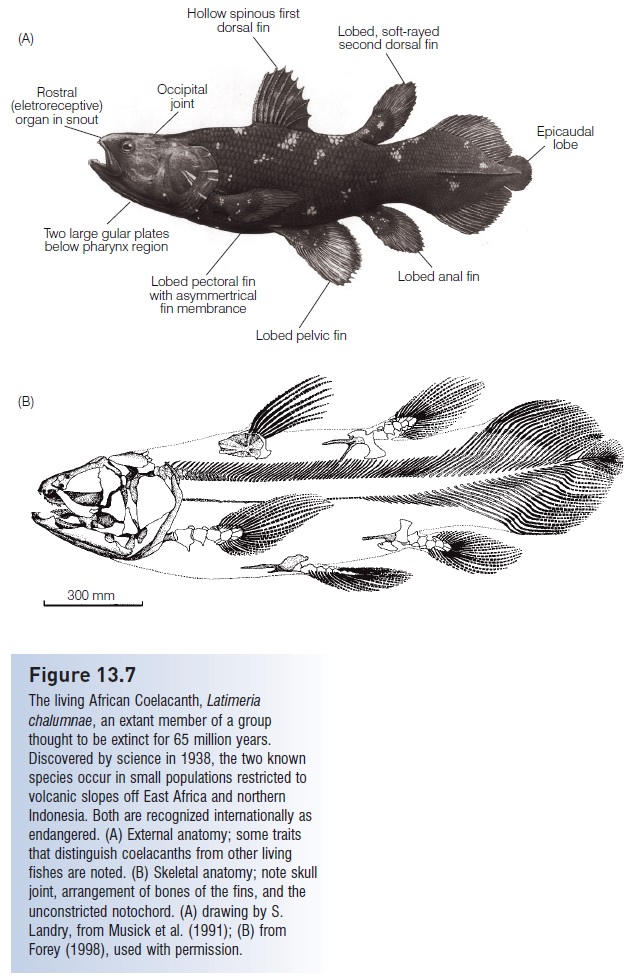 The living African Coelacanth, Latimeria chalumnae, an extant member of a group thought to be extinct for 65 million years. Discovered by science in 1938, the two known species occur in small populations restricted to volcanic slopes off East Africa and northern Indonesia. Both are recognized internationally as endangered. (A) External anatomy; some traits that distinguish coelacanths from other living fishes are noted. (B) Skeletal anatomy; note skull joint, arrangement of bones of the fins, and the unconstricted notochord. (A) drawing by S. Landry, from Musick et al. (1991); (B) from Forey (1998), used with permission.

The first and subsequent specimens also confi rmed speculation about other aspects of coelacanth biology, including reproductive mode. One paleontological finding of a Jurassic species showed skeletal impressions of small coelacanths inside a larger one, suggesting that coelacanths were viviparous (Watson 1927). A later fossil indicated eggs inside a coelacanth, suggesting oviparity and implicating cannibalism in the case of Watson’s specimen. More recently, dissections of a gravid female Latimeria have revealed 5–26 well-developed young with yolk sacs or yolk sac scars (Smith et al. 1975; Bruton et al. 1992). Latimeria is a lecithotrophic live-bearer: young develop in the oviducts from the largest eggs of any known bony fish (9 cm diameter, >300 g) and gain all their nutrition from the large, attached yolk sac (Fricke & Frahm 1992). Watson’s original interpretation was correct.

Latimeria, and coelacanths by extension, are not ancestral to the tetrapods but represent an offshoot lineage within the sarcopterygians. The elpistostegalian tetrapodomorphs are the most likely ancestral group. Elpistostegalians apparently had well-developed lungs, as befits a tetrapod ancestor. In contrast, Latimeria has a fat-filled gas bladder that is no more than a vestigial outpocket of the gut. It is obviously used for hydrostatic control and is not a functional “lung”, not surprising for a fish that lives between 100 and 250 m depth and seldom if ever ventures near the surface. The blood vessel that drains the gas bladder returns blood to the sinus venosus at the back of the heart, as in other fishes. In tetrapods, this vein carries oxygenated blood to the left side of the heart and then to the rest of the body. The coelacanth heart itself is characteristically fishlike in that it has no divisions into left and right sides. The gut has a spiral valve, also typical of primitive fishes and not found in tetrapods; the spiral valve in Latimeria has parallel spiral cones rather than a scroll valve as found in ancestral gnathostomes. Latimeria lacks internal choanae (nostrils with an excurrent opening into the roof of the mouth); tetrapods possess internal choanae.

Recent behavioral findings have further clarified our understanding of Latimeria’s ecology. J. L. B. Smith (1956) called the coelacanth “Old Four Legs”, in reference to the leglike appearance of the paired fins. This led to speculation that Latimeria literally walked along the bottom on its pectoral and pelvic fins. Motion pictures taken from small submarines indicate that Latimeria almost never touches the bottom (Fricke et al. 1987, 1991b). It instead drifts in the water column with the currents, sculling with its paired fins in an alternating diagonal pattern: when the left pectoral and right pelvic fins are moved anteriorly, the right pectoral and left pelvic fins move posteriorly. This is the pattern of locomotion shown by tetrapods, and interestingly, also by the lungfish Protopteruswhen moving across the bottom with its paired fins (Greenwood 1987).

Latimeria is highly electrosensitive – as are most primitive fishes – detecting weak electric currents via a unique series of pits and tubes in the snout called the rostral organ. This structure bears similarities to the enlarged ampullae of Lorenzini of sharks (Bemis & Hetherington 1982; Balon et al. 1988). During underwater observations, weak electric currents were induced in a rod placed near drifting Latimeria, and the fish responded by orienting in a vertical, headdown manner. As is characteristic of many nocturnally active fishes, the living coelacanth forms daytime resting aggregations, with as many as 17 fish occurring together in a single small cave. The fish have large, overlapping home ranges, and return to the same caves repeatedly (Fricke et al. 1991b). These observations suggest that the electrical sense of Latimeria could serve not only for prey detection, but also for nocturnal navigation while moving through the complex lava slopes that these fishes inhabit (Bemis & Hetherington 1982). 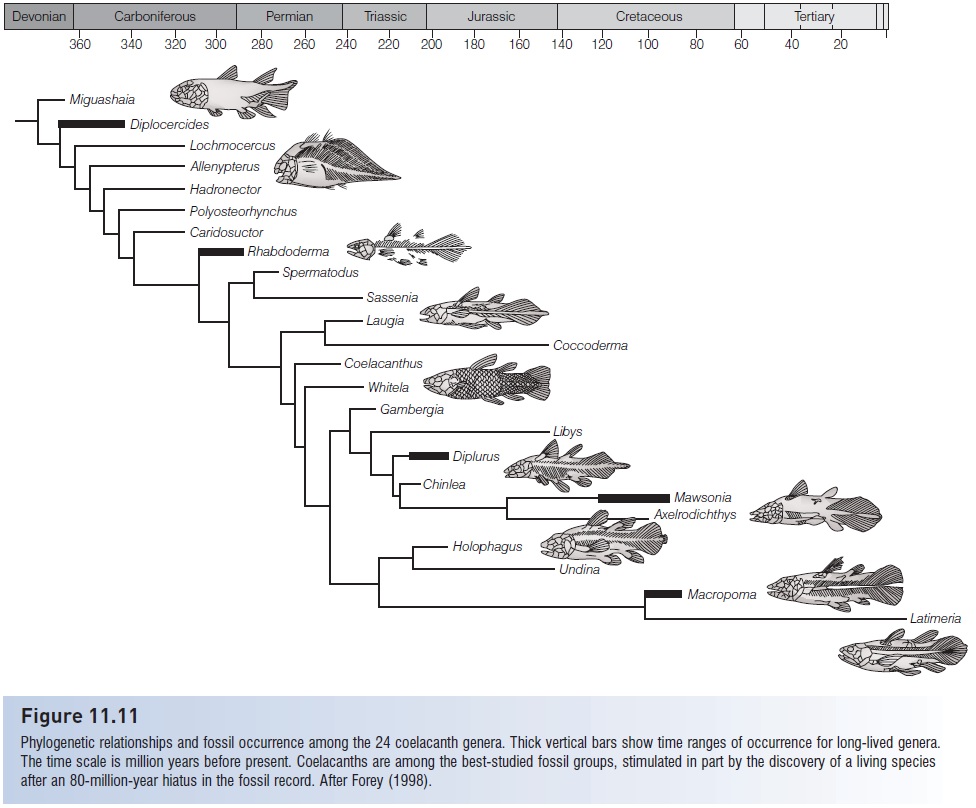 Coelacanths have an extensive, well-studied fossil record, dating back to the Middle Devonian (see Fig. 11.11). As many as 121 different species have been described, of which 83 are probably valid, constituting 24 genera and perhaps nine families (Cloutier & Forey 1991; Forey 1998). Diversity was maximal during the Early Triassic, when 16 described species existed in both marine and fresh water.