Learning Objectives To acquaint ourselves with • Sources of the study of medieval India • Temples, mosques, tombs, palaces and forts as important sources • Literary and inscriptional texts • Accounts of Arab and Turkish travellers

• Sources of the study of medieval India

• Accounts of Arab and Turkish travellers

The periods from A.D. (CE) 700 to 1200 and from A.D. (CE) 1200 to 1700 are classified as Early Medieval and Later Medieval periods, respectively, in Indian history. Numerous and varied sources are fortunately available to the historians engaging in the study of Medieval India. Added to the information that can be gleaned from inscriptions, monuments and coins are the accounts left by Arab, Persian and Turkish chroniclers. These accounts are rich in detail and have given first-hand information on the life of kings, though they provide very little information on the life of the common people. The opinions of the courtiers and chroniclers are often one-sided, written in a hyperbolic language, exaggerating the king’s achievements. Let us now explore the various sources available for the study of the history of Medieval India.

Do you know the famous words of Khafi Khan, a courtier of Emperor Aurangzeb? He says, ‘It is the duty of an historian to be faithful, to have no hope of profit, no fear of injury, to show no partiality on one side, or animosity on the other, to know no difference between friend and stranger, and to write nothing but with sincerity.’

Sources are the supporting materials, documents or records in the form of evidence that help to reconstruct the past.

We examine the details of political, economic and socio-cultural developments with the aid of sources.

Primary Sources: Inscriptions, monuments and coins, and the information available in them. 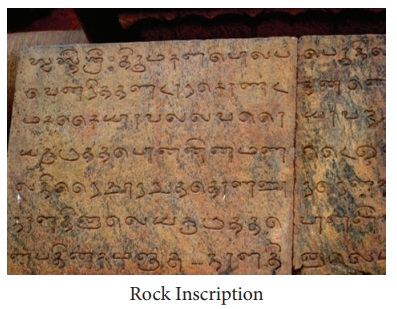 Inscriptions are writings engraved on solid surfaces such as rocks, stones, temple walls and metals. The king’s royal decrees, dedications and donations, monuments raised in commemoration of victories in wars, those built in memory of deceased warriors, contain rich information about the concerned era.

Various types of lands gifted by the Chola kings are known from the inscriptions and copper plates. They are:

Shalabhoga - land for the maintenance of a school

Copper-plate grants, which were treated as legal documents, have significant source value. The Islamic-Persian practices and the relatively high cost of copper plates made palm leaf and paper cheaper alternatives from 13th century onwards.

Several copper-plate grants issued during the later Chola period (10th to 13th century) record gifts to individual priests or teachers who were Hindu, Buddhist, or Jaina, or to persons of eminence. Both the giver and the receiver are very elaborately described. By contrast, most stone inscriptions differ in their content. In stone inscriptions, the beneficence of a donor is recorded. The major focus is upon the giver. Tiruvalangadu plates of Rajendra Chola I and the Anbil plates of Sundara Chola are notable examples. Uttiramerur inscriptions in Kanchipuram district provide details of the way in which the village administration was conducted. 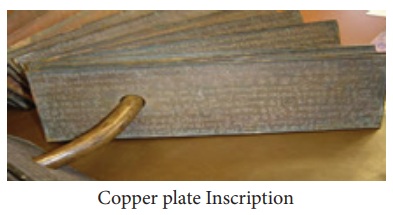 The Sultans of Delhi introduced a new type of architecture. The monuments they built had arches, domes and minarets as the main features. The inscriptions in these monuments contain rich information, which can be used to construct history. 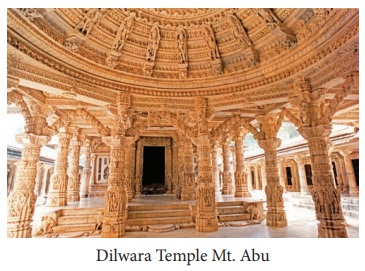 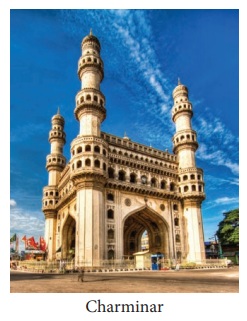 Quwwat-ul Islam Masjid, Moth-ki-Masjid, Jama Masjid, Fatehpur Sikri Dargah (all in and around Delhi) and Charminar (Hyderabad) are the important mosques belonging to the medieval times. 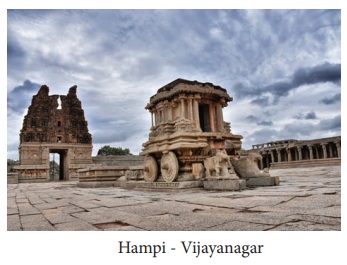 The forts of historical importance are Agra Fort, Chittor Fort, Gwalior Fort and Delhi Red Fort as well as the forts of Daulatabad (Aurangabad) and Firoz Shah Kotla (Delhi). Palaces in Jaipur, Jaisalmer and Jodhpur signify the greatness of the Rajput dynasty that wielded enormous power from these places. Qutb Minar and Alai-Darwaza, the tombs of Iltutmish, Balban and all the Mughal rulers are the other prominent structures recognised as valuable sources of information. Cities in ruin such as Firozabad and Tughlaqabad in north India and Hampi in south India remain rich repositories of the history of medieval India.

The picture and the legend on the coins convey the names of kings with their titles and portraits, events, places, dates, dynasties and logos. The composition of metals in the coins gives us information on the economic condition of the empire. Mention of king’s achievements like military conquests, territorial expansion, trade links and religious faith can also be found in the coins. 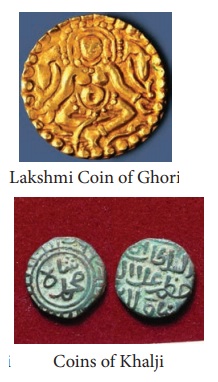 Muhammad Ghori had stamped the figure of Goddess Lakshmi on his gold coins and had his name inscribed on it. This coin tells us that this early Turkish invader was in all likelihood liberal in religious outlook.

Copper Jitals are available for the study of the period of the Delhi Sultans. Silver Tanka introduced by Iltutmish, Ala-ud-din Khalji’s gold coins, Muhammad-bin-Tughluq’s copper token currency are indicative of coinage as well as the economic prosperity or otherwise of the country of the time.

Devotional movement in South India and later in North resulted in the development of bhakti or devotional literature. The Chola period was known as the period of devotional literature and works such as KambaRamayanam, Sekkizhar’s Periyapuranam, Nalayira Divyaprabhandham, composed by 12 Azhwars and compiled by Nathamuni, Devaram composed by Appar, Sambandar and Sundarar and compiled by Nambiyandar Nambi, Manikkavasakar’s Thiruvasagam, all were scripted during the Chola times. Jayadeva’s Gita Govindam (12th century) was a follow-up of the Bhakti Movement in South India. Kabir Das, a 15th century mystic poet, also had an influence on the Bhakti Movement in India.

Madura Vijayam and Amuktamalyatha were poems composed by Gangadevi and Krishnadevaraya respectively that help us gain insight into the events and individuals associated with the Vijayanagara Empire. Chand Bardai’s Prithiviraj Raso portrays the Rajput king’s valour. We have no Indian accounts about what happened during the Turkish invasion of India. For pre-Islamic periods, the only exception was Kalhana’s Rajtarangini (11th century).

Minhaj-us-Siraj, patronised by Sultan Nazir-ud-din Mahmud of Slave Dynasty, wrote Tabakat-i-Nasiri. The compendium deals with the period from the conquest of Muhammad Ghori to A.D. (CE) 1260. The compendium was named after his patron. In the 13th century, Hasan Nizami, a migrant from Ghazni wrote. Taj-ul-Ma’asir towards the end of Iltutmish’s rule. It provides information about Qutb-ud-din Aibak and is considered the first official history of the Delhi Sultanate. Zia-ud-Barni, a courtier of Muhammad Tughluq, wrote Tarikh-i-Firoz Shahi, in which he dealt with the history of Delhi Sultanate from Ghiyas-ud-din Balban to the early years of the reign of Firoz Shah Tughluq. Ferishta’sTarikh-i-Frishta (16th century) deals with the history of the rise of the Mughal power in India.

In the 16th century, emperor Babur’s Babur Nama and Abul Fazal’s Ain-i-Akbari and Akbar Nama provided detailed information about these two emperors. In the 17th century, Jahangir wrote his memoir, Tuzk-i-Jahangiri, throwing a lot of light on the period. Apart from autobiographies of emperors, Tabakat-i-Akbari, authored by Nizam-ud-din Ahmad, is considered reliable than the exaggerated account of Abul Fazal. Similarly, Badauni’s outstanding work, Tarikh-i-Badauni (Badauni's History), was published in 1595. This work spans three volumes. The volume on Akbar’s reign is a frank and critical account of Akbar's administration, particularly of his religious policy.

Marco Polo, a Venetian traveller, visited when the Pandya kingdom was becoming the leading Tamil power in the 13th century. Marco Polo was twice in Kayal, which was a port city (presently in Thoothukudi district of Tamilnadu). It was full of ships from Arabia and China. Marco Polo tells us that he himself came by a ship from China. According to Marco Polo, thousands of horses were imported into southern India by sea from Arabia and Persia.

Al-Beruni (11th century) accompanied Mahmud of Ghazni in one of his campaigns, and stayed in India for 10 years. The most accurate account of Mahmud’s Somnath expedition is that of Alberuni. As learned man and a scholar, he travelled all over India trying to understand India and her people. He learnt Sanskrit and studied the philosophy of India. In his book Tahquiq-i-Hind, Alberuni discussed the Indian conditions, systems of knowledge, social norms and religion.

Ibn Battuta (14th century), an Arab-born Morocco scholar, travelled from Morocco right across North Africa to Egypt and then to Central Asia and India. His travelogue (Rihla [The Travels]) contains rich details about the people and the countries he visited. According to him, Egypt was rich then, because of the whole of the Indian trade with the West passed through it. Ibn Battuta tells us of caste in India and the practice of sati. We learn from him that Indian merchants were carrying on a brisk trade in foreign ports and Indian ships in the seas. He describes the city of Delhi a vast and magnificent city. Those were the days when Sultan Muhammad bin Tughluq transferred his capital from Delhi to Devagiri (Daulatabad) in the south, converting this city into a desert. 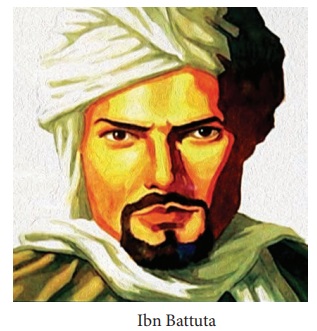 In the South, Vijayanagar had many foreign visitors who left behind their detailed accounts of the state. An Italian named Nicolo Conti came in 1420. Abdur-Razzaq came from Heart (the court of Great Khan in Central Asia) in 1443. Domingo Paes, a Portuguese traveller, visited the city in 1522. All of them recorded their observations, which are very useful for us today to know the glory of the Vijayanagar Empire.

• Sources are classified as primary and secondary sources.

• Inscriptions on stones, rocks and temple walls and copper-plate grants with royal orders and events in the courts, which have evidentiary value are dealt with.

• The coins of Iltutmish, Ala-ud-din Khalji and copper coins of the later Islamic rulers are discussed.

• Devotional literature belonging to the era of Bhakthi Movement is provided.

• Books, biographies and autobiographies that provide information about the political, social and economic conditions of the medieval times are detailed.

• Travallers’ accounts mostly by the visiting Arab and Persian scholars are given in the end.

3. travelogue: a book or illustrated account of the places visited and experiences encountered by a traveller பயணக்குறிப்புகள்

4. commemoration: in remembrance of நினைவாக

6. minarets: a tall tower, typically part of a mosque தூபிகள்

7. repositories: the places, buildings where materials are stored or kept களஞ்சியங்கள்

9. compendium: a collection of detailed information about a particular subject , especially in a book தொகுப்பு

This activity helps you to know about the rare collection of coins.

Step 1: Open the Browser and type the given URL (or) Scan the QR Code.

Step 3: Select any dynasty and then select any Kingdom (Ex. Sultanate) 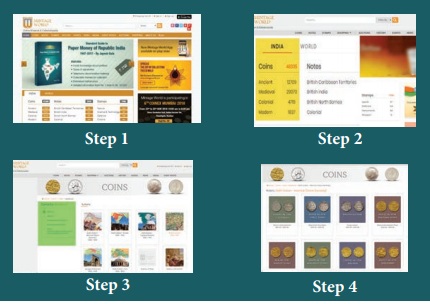 https://www.mintageworld.com/ (or) scan the QR Code