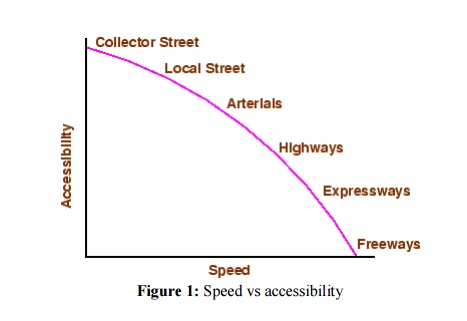 The roads can be classified in many ways. The classification based on speed and accessibility is the most generic one.

À        Freeways: Freeways are access-controlled divided highways. Most freeways are four lanes, two lanes each direction, but many freeways widen to incorporate more lanes as they enter urban areas. Access is controlled through the use of interchanges, and the type of interchange depends upon the kind of intersecting road way (rural roads, another freeway etc.)

À        Expressways: They are superior type of highways and are designed for high speeds ( 120 km/hr is common), high traffic volume and safety. They are generally provided with grade separations at intersections. Parking, loading and unloading of goods and pedestrian traffic is not allowed on expressways.

À        Arterials: It is a general term denoting a street primarily meant for through traffic usually on a continuous route. They are generally divided highways with fully or partially controlled access. Parking, loading and unloading activities are usually restricted and regulated. Pedestrians are allowed to cross only at intersections/designated pedestrian crossings.

À        Local streets : A local street is the one which is primarily intended for access to residence, business or abutting property. It does not normally carry large volume of traffic and also it allows unrestricted parking and pedestrian movements.

À        Collector streets: These are streets intended for collecting and distributing traffic to and from local streets and also for providing access to arterial streets. Normally full access is provided on these streets . There are few parking restrictions except during peak hours.