Ø   RMI enables you not only to pass data among objects on different systems, but also to invoke methods in a remote object

The Differences between RMI and Traditional Client/Server Approach

·        RMI component can act as both a client and a server, depending on the scenario in question.

·        RMI system can pass functionality from a server to a client and vice versa. A client/server system typically only passes data back and forth between server and client.

·        In RMI, the definition of a remote service is coded using a Java interface.

·        The implementation of the remote service is coded in a class

·        The key to understanding RMI is to remember that interfaces define behavior and classes define implementation.

1. The first class is the implementation of the behavior, and it runs on the server.

2. The second class acts as a proxy for the remote service and it runs on the client.

The RMI implementation is built from three abstraction layers.

Ø  The first is the Stub and Skeleton layer. This layer intercepts method calls made by the client to the interface reference variable and redirects these calls to a remote RMI service.

Ø  The Transport Layer is based on TCP/IP connections between machines in a network. It provides basic connectivity, as well as some firewall penetration strategies.

1.     A server object is registered with the RMI registry;

2.     A client looks through the RMI registry for the remote object;

3.     Once the remote object is located, its stub is returned in the client;

4.     The remote object can be used in the same way as a local object. The communication between the client and the server is handled through the stub and skeleton

In this layer, RMI uses the Proxy design pattern. In the Proxy pattern, an object in one context is represented by another (the proxy) in a separate context. The proxy knows how to forward method calls between the participating objects. The following class diagram illustrates the Proxy pattern. 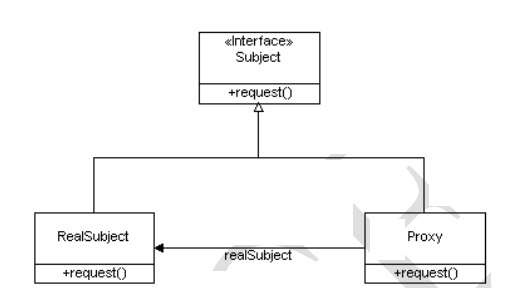 The Remote Reference Layers defines and supports the invocation semantics of the RMI connection. This layer provides a RemoteRef object that represents the link to the remote service implementation object.

The stub objects use the invoke() method in RemoteRef to forward the method call. The RemoteRef object understands the invocation semantics for remote services.

The Transport Layer makes the connection between JVMs. All connections are stream-based network connections that use TCP/IP. Even if two JVMs are running on the same physical computer, they connect through their host computer's TCP/IP network protocol stack. The following diagram shows the unfettered use of TCP/IP connections between JVMs.

On top of TCP/IP, RMI uses a wire level protocol called Java Remote Method Protocol (JRMP). JRMP is a proprietary, stream-based protocol that is only partially specified is now in two versions. The first version was released with the JDK 1.1 version of RMI and required the use of Skeleton classes on the server. The second version was released with the Java 2 SDK. It has been optimized for performance and does not require skeleton classes.Some other changes with the Java 2 SDK are that RMI service interfaces are not required to extend from java.rmi.Remote and their service methods do not necessarily throw RemoteException.

RMI can use many different directory services, including the Java Naming and Directory Interface (JNDI). RMI itself includes a simple service called the RMI Registry, rmiregistry. The RMI Registry runs on each machine that hosts remote service objects and accepts queries for services, by default on port 1099.

On a host machine, a server program creates a remote service by first creating a local object that implements that service. Next, it exports that object to RMI. When the object is exported, RMI creates a listening service that waits for clients to connect and request the service. After exporting, the server registers the object in the RMI Registry under a public name.

On the client side, the RMI Registry is accessed through the static class Naming. It provides the method lookup() that a client uses to query a registry. The method lookup() accepts a URL that specifies the server host name and the name of the desired service. The method returns a remote reference to the service object. The URL takes the form:

where the host_name is a name recognized on the local area network (LAN) or a DNS name on the Internet. The name_service_port only needs to be specified only if the naming service is running on a different port to the default 1099.

Build a simple remote calculator service and use it from a client program.

A working RMI system is composed of several parts.

Ø  Interface definitions for the remote services

Ø    Implementations of the remote services

Ø   A server to host the remote services

Ø   A class file provider (an HTTP or FTP server)

Ø   A client program that needs the remote services

To simplify things, you will use a single directory for the client and server code. By running the client and the server out of the same directory, you will not have to set up an HTTP or FTP server to provide the class files.Assuming that the RMI system is already designed, you take the following steps to build a system:

3.     Generate Stub and Skeleton class files from the implementation classes

1.                 Interfaces: First, write and compile the Java code for the service interface. The Calculator interface defines all of the remote features offered by the service:

Next, write the implementation for the remote service. This is the CalculatorImpl class:

//Implementations must have an explicit constructor in order to declare the

public long add(long a, long b) throws java.rmi.RemoteException { return a + b; }

public long sub(long a, long b) throws java.rmi.RemoteException {  return a - b; }

public long mul(long a, long b) throws java.rmi.RemoteException { return a * b; }

public long div(long a, long b) throws java.rmi.RemoteException { return a / b;  } }

3. Stubs and Skeletons: You next use the RMI compiler, rmic, to generate the stub and skeleton files. The compiler runs on the remote service implementation class file.

4. Host Server: Remote RMI services must be hosted in a server process. The class CalculatorServer is a very simple server that provides the bare essentials for hosting.

5.Client The source code for the client follows:

Start with the Registry. You must be in the directory that contains the classes you have written. From there, enter the following: > rmiregistry

If all goes well, the registry will start running and you can switch to the next console.

In the second console start the server hosting the CalculatorService, and enter the following:

It will start, load the implementation into memory and wait for a client connection.

In the last console, start the client program.           >java CalculatorClient