1. Recovery Outline and Categorization of Recovery Algorithms 2. Caching (Buffering) of Disk Blocks 3. Write-Ahead Logging, Steal/No-Steal, and Force/No-Force 4. Checkpoints in the System Log and Fuzzy Checkpointing 5. Transaction Rollback and Cascading Rollback 6. Transaction Actions That Do Not Affect the Database

Recovery from transaction failures usually means that the database is restored to the most recent consistent state just before the time of failure. To do this, the system must keep information about the changes that were applied to data items by the various transactions. This information is typically kept in the system log, as we dis-cussed in Section 21.2.2. A typical strategy for recovery may be summarized informally as follows:

If there is extensive damage to a wide portion of the database due to catastrophic failure, such as a disk crash, the recovery method restores a past copy of the database that was backed up to archival storage (typically tape or other large capacity offline storage media) and reconstructs a more current state by reapplying or redoing the operations of committed transactions from the backed uplog, up to the time of failure.

When the database on disk is not physically damaged, and a noncatastrophic failure of types 1 through 4 in Section 21.1.4 has occurred, the recovery strategy is to identify any changes that may cause an inconsistency in the database. For example, a transaction that has updated some database items on disk but has not been committed needs to have its changes reversed by undoing its write operations. It may also be necessary to redo some operations in order to restore a consistent state of the database; for example, if a transaction has committed but some of its write operations have not yet been written to disk. For noncatastrophic failure, the recovery protocol does not need a complete archival copy of the database. Rather, the entries kept in the online system log on disk are analyzed to determine the appropriate actions for recovery.

The UNDO and REDO operations are required to be idempotent—that is, executing an operation multiple times is equivalent to executing it just once. In fact, the whole recovery process should be idempotent because if the system were to fail during the recovery process, the next recovery attempt might UNDO and REDO certain write_item operations that had already been executed during the first recovery process. The result of recovery from a system crash during recovery should be the same as the result of recovering when there is no crash during recovery!

In general, it is convenient to consider recovery in terms of the database disk pages (blocks). Typically a collection of in-memory buffers, called the DBMS cache, is kept under the control of the DBMS for the purpose of holding these buffers. A directory for the cache is used to keep track of which database items are in the buffers. This can be a table of <Disk_page_address, Buffer_location, ... > entries. When the DBMS requests action on some item, first it checks the cache directory to determine whether the disk page containing the item is in the DBMS cache. If it is not, the item must be located on disk, and the appropriate disk pages are copied into the cache. It may be necessary to replace (or flush) some of the cache buffers to make space available for the new item. Some page replacement strategy similar to these used in operating systems, such as least recently used (LRU) or first-in-first-out (FIFO), or a new strategy that is DBMS-specific can be used to select the buffers for replacement, such as DBMIN or Least-Likely-to-Use (see bibliographic notes).

The entries in the DBMS cache directory hold additional information relevant to buffer management. Associated with each buffer in the cache is a dirty bit, which can be included in the directory entry, to indicate whether or not the buffer has been modified. When a page is first read from the database disk into a cache buffer, a new entry is inserted in the cache directory with the new disk page address, and the dirty bit is set to 0 (zero). As soon as the buffer is modified, the dirty bit for the corresponding directory entry is set to 1 (one). Additional information, such as the transaction id(s) of the transaction(s) that modified the buffer can also be kept in the directory. When the buffer contents are replaced (flushed) from the cache, the contents must first be written back to the corresponding disk page only if its dirty bit is 1. Another bit, called the pin-unpin bit, is also needed—a page in the cache is pinned (bit value 1 (one)) if it cannot be written back to disk as yet. For example, the recovery protocol may restrict certain buffer pages from being written back to the disk until the transactions that changed this buffer have committed.

Two main strategies can be employed when flushing a modified buffer back to disk. The first strategy, known as in-place updating, writes the buffer to the same original disk location, thus overwriting the old value of any changed data items on disk. Hence, a single copy of each database disk block is maintained. The second strategy, known as shadowing, writes an updated buffer at a different disk location, so mul-tiple versions of data items can be maintained, but this approach is not typically used in practice.

In general, the old value of the data item before updating is called the before image (BFIM), and the new value after updating is called the after image (AFIM). If shad-owing is used, both the BFIM and the AFIM can be kept on disk; hence, it is not strictly necessary to maintain a log for recovering. We briefly discuss recovery based on shadowing in Section 23.4.

Standard DBMS recovery terminology includes the terms steal/no-steal and force/no-force, which specify the rules that govern whena page from the database can be written to disk from the cache:

If a cache buffer page updated by a transaction cannot be written to disk before the transaction commits, the recovery method is called a no-steal approach. The pin-unpin bit will be used to indicate if a page cannot be written back to disk. On the other hand, if the recovery protocol allows writing an updated buffer before the transaction commits, it is called steal. Steal is used when the DBMS cache (buffer) manager needs a buffer frame for another transaction and the buffer manager replaces an existing page that had been updated but whose transaction has not committed. The no-steal rule means that UNDO will never be needed during recovery, since a commit-ted transaction will not have any of its updates on disk before it commits.

The deferred update (NO-UNDO) recovery scheme discussed in Section 23.2 follows a no-steal approach. However, typical database systems employ a steal/no-force strategy. The advantage of steal is that it avoids the need for a very large buffer space to store all updated pages in memory. The advantage of no-force is that an updated page of a committed transaction may still be in the buffer when another transaction needs to update it, thus eliminating the I/O cost to write that page multiple times to disk, and possibly to have to read it again from disk. This may provide a substantial saving in the number of disk I/O operations when a specific page is updated heavily by multiple transactions.

To permit recovery when in-place updating is used, the appropriate entries required for recovery must be permanently recorded in the log on disk before changes are applied to the database. For example, consider the following write-ahead logging (WAL) protocol for a recovery algorithm that requires both UNDO and REDO:

The before image of an item cannot be overwritten by its after image in the database on disk until all UNDO-type log records for the updating transaction—up to this point—have been force-written to disk.

The commit operation of a transaction cannot be completed until all the REDO-type and UNDO-type log records for that transaction have been force-written to disk.

Another type of entry in the log is called a checkpoint. A [checkpoint, list of active transactions] record is written into the log periodically at that point when the system writes out to the database on disk all DBMS buffers that have been modified. As a consequence of this, all transactions that have their [commit, T ] entries in the log before a [checkpoint] entry do not need to have theirWRITE operations redone in case of a system crash, since all their updates will be recorded in the database on disk during checkpointing. As part of checkpointing, the list of transaction ids for active transactions at the time of the checkpoint is included in the checkpoint record, so that these transactions can be easily identified during recovery.

The recovery manager of a DBMS must decide at what intervals to take a check-point. The interval may be measured in time—say, every m minutes—or in the number t of committed transactions since the last checkpoint, where the values of m or t are system parameters. Taking a checkpoint consists of the following actions:

Force-write all main memory buffers that have been modified to disk.

As a consequence of step 2, a checkpoint record in the log may also include addi-tional information, such as a list of active transaction ids, and the locations (addresses) of the first and most recent (last) records in the log for each active trans-action. This can facilitate undoing transaction operations in the event that a trans-action must be rolled back.

The time needed to force-write all modified memory buffers may delay transaction processing because of step 1. To reduce this delay, it is common to use a technique called fuzzy checkpointing. In this technique, the system can resume transaction processing after a[begin_checkpoint] record is written to the log without having to wait for step 2 to finish. When step 2 is completed, an[end_checkpoint, ...] record is written in the log with the relevant information collected during checkpointing. However, until step 2 is completed, the previous checkpoint record should remain valid. To accomplish this, the system maintains a file on disk that contains a pointer to the valid checkpoint, which continues to point to the previous checkpoint record in the log. Once step 2 is concluded, that pointer is changed to point to the new checkpoint in the log.

If a transaction T is rolled back, any transaction S that has, in the interim, read the value of some data item X written by T must also be rolled back. Similarly, once S is rolled back, any transaction R that has read the value of some data item Y written by S must also be rolled back; and so on. This phenomenon is called cascading roll-back, and can occur when the recovery protocol ensuresrecoverable schedules but does not ensure strict or cascadeless schedules (see Section 21.4.2). Understandably, cascading rollback can be quite complex and time-consuming. That is why almost all recovery mechanisms are designed so that cascading rollback is never required. 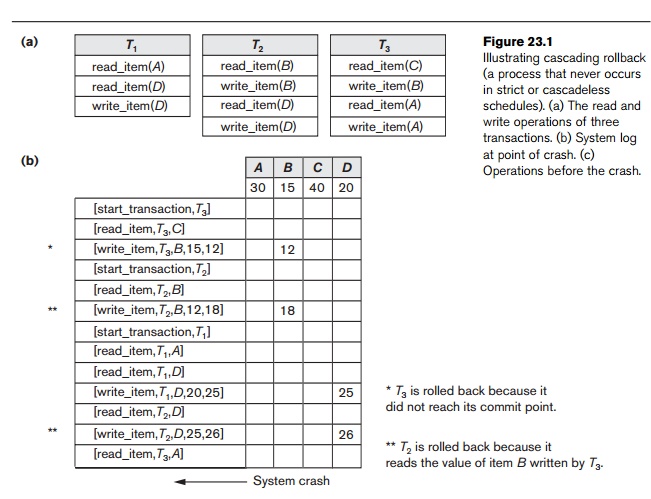 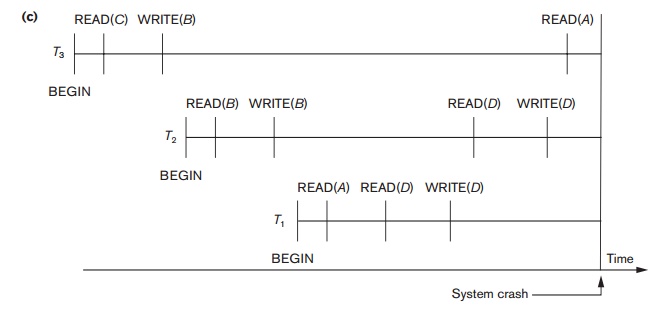 We must now check for cascading rollback. From Figure 23.1(c) we see that transaction T2 reads the value of item B that was written by transaction T3; this can also be determined by examining the log. Because T3 is rolled back, T2 must now be rolled back, too. TheWRITE operations of T2, marked by ** in the log, are the ones that are undone. Note that only write_item operations need to be undone during transaction rollback; read_item operations are recorded in the log only to determine whether cascading rollback of additional transactions is necessary.

In practice, cascading rollback of transactions is never required because practical recovery methods guarantee cascadeless or strictschedules. Hence, there is also no need to record any read_item operations in the log because these are needed only for determining cascading rollback.

6. Transaction Actions That Do Not Affect the Database