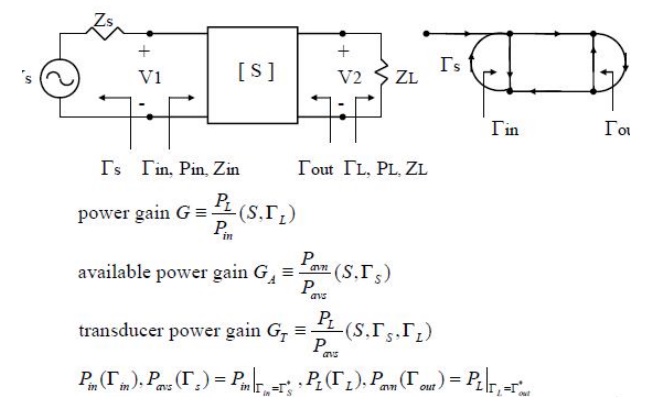 ü Conditional stability: The network is conditionally stable if |_in| < 1 and |_out| < 1 only for a

certain range of passive source and load impedances. This case is also referred to as potentially unstable.

ü Applying the above requirements for unconditional stability to (12.3) gives the following conditions that must be satisfied by _S and _L if the amplifier is to be unconditionally

ü We can derive the equation for the output stability circle as follows. First use (12.19a) to express the condition that |_in| = 1 as 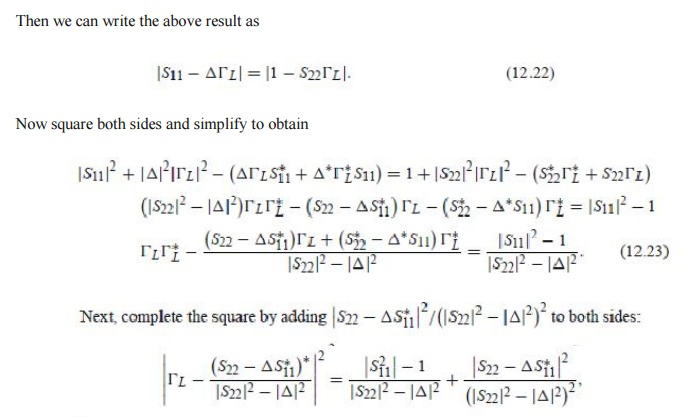 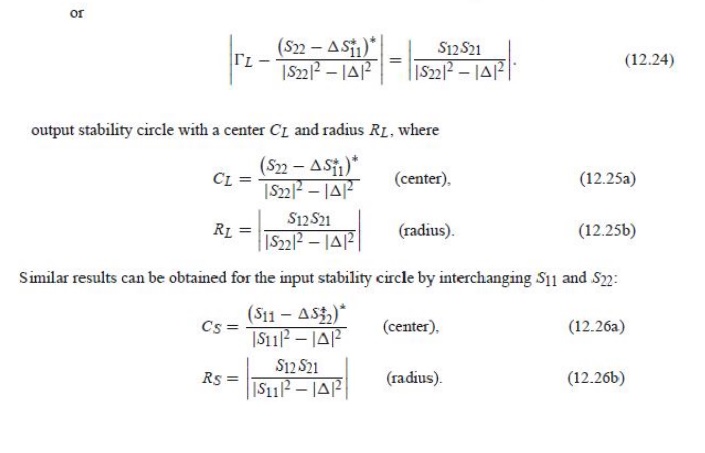 Consider an arbitrary two-port network, characterized by its scattering matrix [S], connected to source and load impedances ZS and ZL , respectively, as shown in Figure 12.1.

This gain is independent of ZS, although the characteristics of some active devices may be dependent on ZS.

This assumes conjugate matching of both the source and the load, and depends on ZS, but not ZL . _

Transducer power gain = GT = PL/Pavs is the ratio of the power delivered to the load to the power available from the source. This depends on both ZS and ZL .

These definitions differ primarily in the way the source and load are matched to the twoport device; if the input and output are both conjugately matched to the two-port device, then the gain is maximized and G = GA = GT . With reference to Figure 12.1, the reflection coefficient seen looking toward the load is

while the reflection coefficient seen looking toward the source is 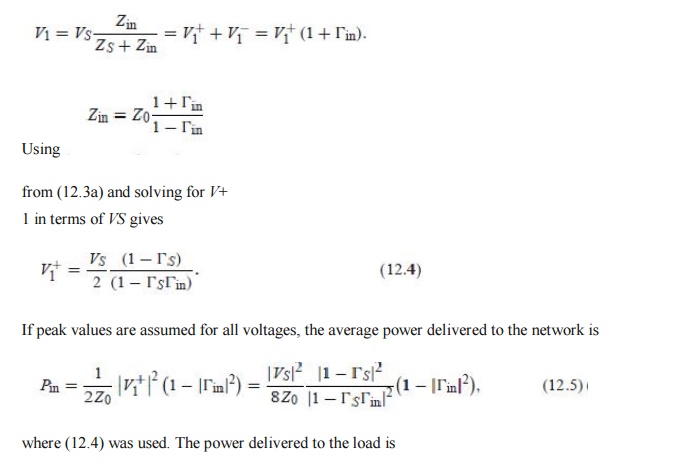 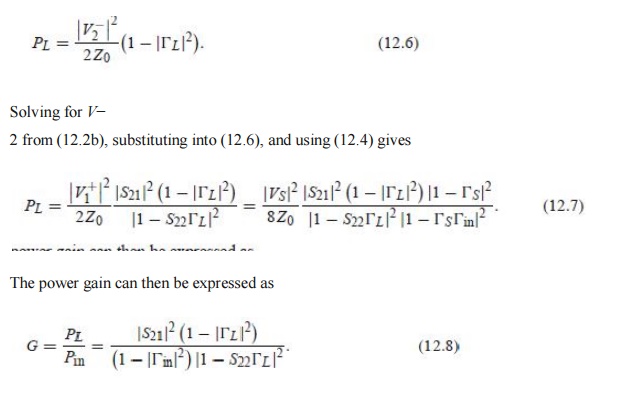 The power available from the source, Pavs, is the maximum power that can be delivered to the network. This occurs when the input impedance of the terminated network is conjugately matched to the source impedance, as discussed in Section 2.6. Thus, from (12.5),

Similarly, the power available from the network, Pavn, is the maximum power that can be delivered to the load. Thus, from (12.7), 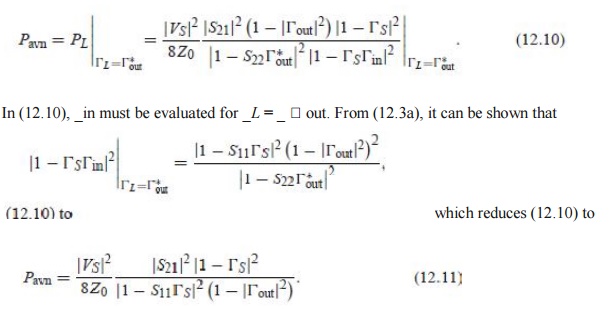 Observe that Pavs and Pavn have been expressed in terms of the source voltage, VS, which is independent of the input or load impedances. There would be confusion if these quantities were expressed in terms of V+ 1 since V+ 1 is different for each of the calculations of PL , Pavs, and Pavn. Using (12.11) and (12.9), we obtain the available power gain as

A special case of the transducer power gain occurs when both the input and output are matched for zero reflection (in contrast to conjugate matching). Then _L = _S = 0, and (12.13) reduces to

Another special case is the unilateral transducer power gain, GTU, where S12 = 0 (or is negligibly small). This nonreciprocal characteristic is approximately true for many transistors devices. From (12.3a), 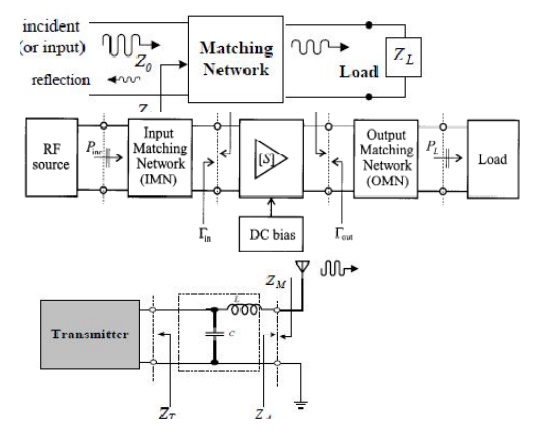 Impedance matching (or tuning) is important for the following reasons

ü linearizing the frequency response of the circuit

Factors in the selection of matching networks 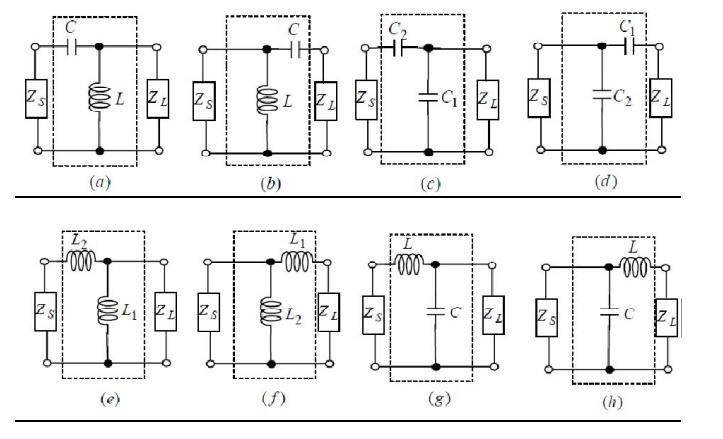 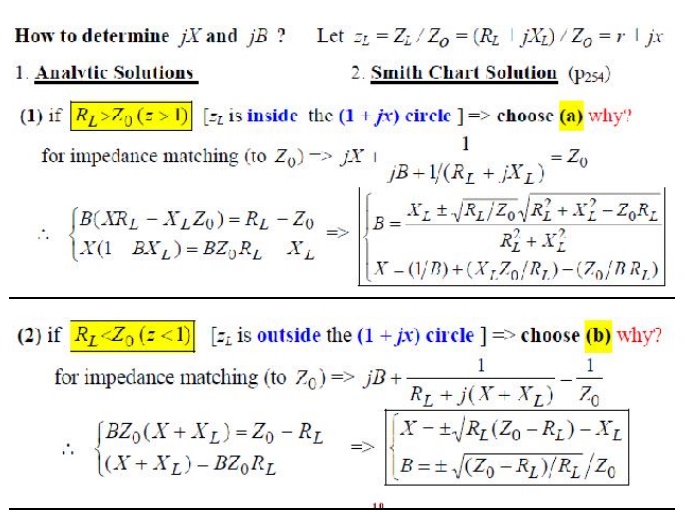 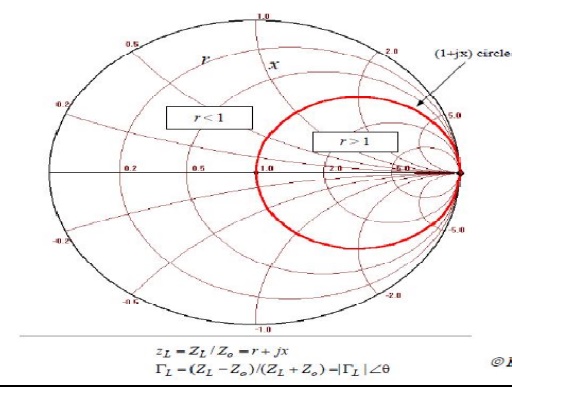 ü In the mid-GHz and higher frequency range, the discrete R/L/C lumped elements will have more noticeable parasitic effects (see chapter 2) and let to complicating the circuit design process

From Discrete Components to Microstrip Lines

ü In general, one shunt capacitor & two series transmission lines is sufficiently to transform any load to any input impedance. 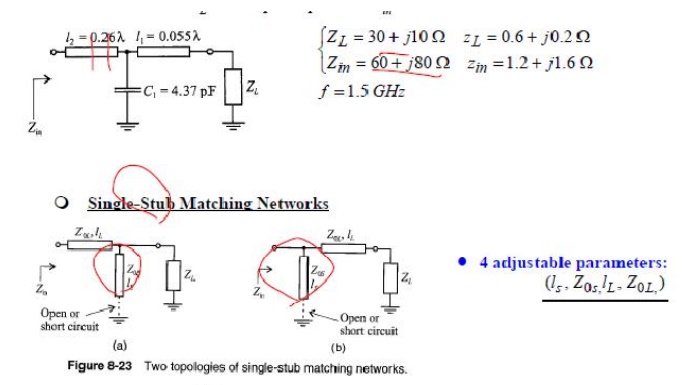