A program statement that causes a jump of control from one part of the program to another is called control structure or control statement. 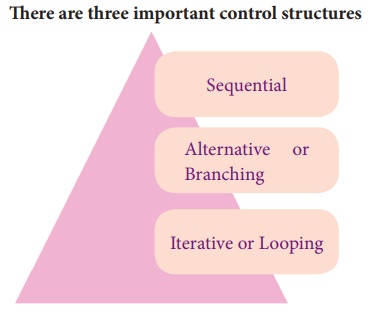 #Program to print your name and address - example for sequential statement

print ("Hello! This is Shyam")

Hello! This is Shyam

In our day-to-day life we need to take various decisions and choose an alternate path to achieve our goal. May be we would have taken an alternate route to reach our destination when we find the usual road by which we travel is blocked. This type of decision making is what we are to learn through alternative or branching statement. Checking whether the given number is positive or negative, even or odd can all be done using alternative or branching statement.

Python provides the following types of alternative or branching statements:

(i) Simple if statement

Simple if is the simplest of all decision making statements. Condition should be in the

statements-block1form of relational or logical expression.

In the above syntax if the condition is true statements - block 1 will be executed.

#Program to check the age and print whether eligible for voting

print ("You are eligible for voting")

You are eligible for voting

As you can see in the second execution no output will be printed, only the Python prompt will be displayed because the program does not check the alternative process when the condition is failed.

The if .. else statement provides control to check the true block as well as the false block. Following is the syntax of ‘if..else’ statement. 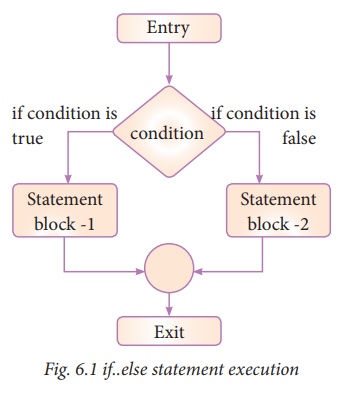 if..else statement thus provides two possibilities and the condition determines which BLOCK is to be executed.

Example 6.3: #Program to check if the accepted number odd or even

56 is an even number

An alternate method to rewrite the above program is also available in Python. The complete if..else can also written as:

variable = variable1 if condition else variable 2

Example 6.4: #Program to check if the accepted number is odd or even (using alternate method of if...else)

When we need to construct a chain of if statement(s) then ‘elif’ clause can be used instead of ‘else’. 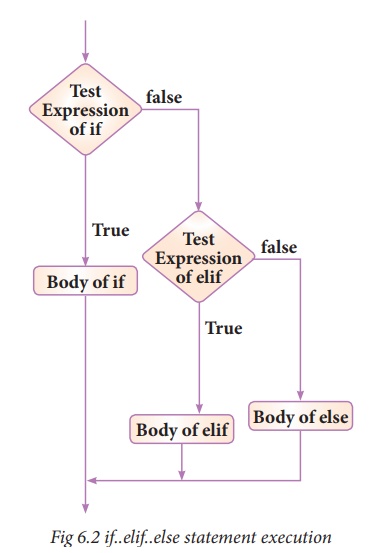 ‘elif’ clause combines if..else-if..else statements to one if..elif…else. ‘elif’ can be considered to be abbreviation of ‘else if’. In an ‘if’ statement there is no limit of ‘elif’ clause that can be used, but an ‘else’ clause if used should be placed at the end.

if..elif..else statement is similar to nested if statement which you have learnt in C++.

Example 6.5: #Program to illustrate the use of nested if statement

The two blocks of code in our example of if-statement are both indented four spaces, which is a typical amount of indentation for Python. In most other programming languages, indentation is used only to help make the code look pretty. But in Python, it is required to indicate to which block of code the statement belongs to.

Example 6.5a: #Program to illustrate the use of ‘in’ and ‘not in’ in if statement

# to check if the letter is vowel

e is a vowel

x the letter is not a/b/c

Iteration or loop are used in situation when the user need to execute a block of code several of times or till the condition is satisfied. A loop statement allows to execute a statement or group of statements multiple times. 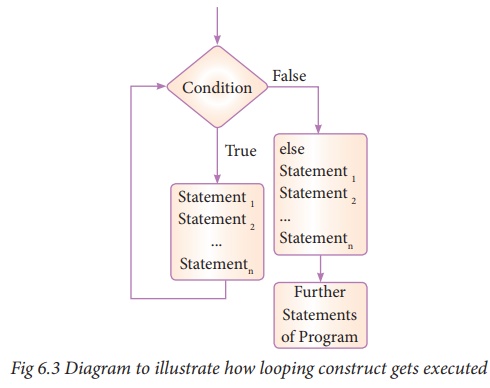 The syntax of while loop in Python has the following syntax: 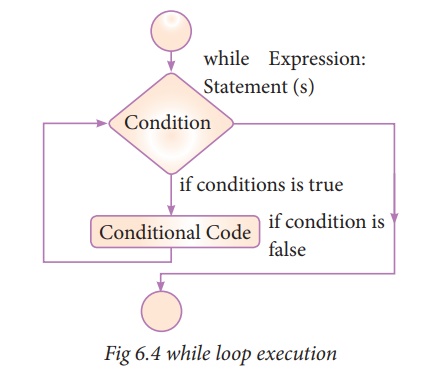 Example 6.6: program to illustrate the use of while loop - to print all numbers from 10 to 15

i=10  # intializing part of the control variable

i=i+1 # Updation of the control variable

Following is an example for using else part within while loop.

Example 6.7: program to illustrate the use of while loop - with else part

i=10  # intializing part of the control variable

i=i+1 # Updation of the control variable

Value of i when the loop exit 16

for loop is the most comfortable loop. It is also an entry check loop. The condition is checked in the beginning and the body of the loop(statements-block 1) is executed if it is only True otherwise the loop is not executed.

The counter_variable mentioned in the syntax is similar to the control variable that we used in the for loop of C++ and the sequence refers to the initial, final and increment value. Usually in Python, for loop uses the range() function in the sequence to specify the initial, final and increment values. range() generates a list of values starting from start till stop-1.

The syntax of range() is as follows: 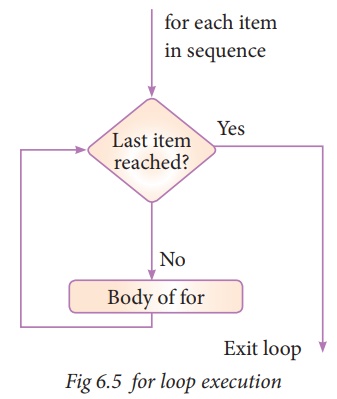 Example 6.9: #program to illustrate the use of for loop - to print single digit even number

Following is an illustration using else part in for loop

Example 6.10: #program to illustrate the use of for loop - to print single digit even number with else part

End of the loop

In Python, indentation is important in loop and other control statements. Indentation only creates blocks and sub-blocks like how we create blocks within a set of { } in languages like C, C++ etc.

In the above code, n is initialized to 100, sum is initialized to 0, the for loop starts executing from 1, for every iteration the value of sum is added with the value of counter variable and stored in sum. Note that the for loop will iterate from 1 till the upper limit -1 (ie. Value of n is set as 100, so this loop will iterate for values from 1 to 99 only, that is the reason why we have set the upper limit as n+1)

range () can also take values from string, list, dictionary etc. which will be dealt in the later chapters.

Example 6.12: program to illustrate the use of string in range() of for loop

for word in 'Computer':

End of the loop

Example 6.13: program to illustrate the use nested loop -for within while loop

The jump statement in Python, is used to unconditionally transfer the control from one part of the program to another. There are three keywords to achieve jump statements in Python : break, continue, pass. The following flowchart illustrates the use of break and continue. 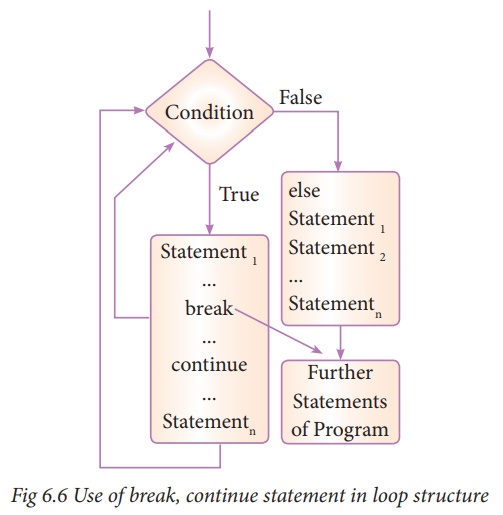 The break statement terminates the loop containing it. Control of the program flows to the statement immediately after the body of the loop.

If break statement is inside a nested loop (loop inside another loop), break will terminate the innermost loop. 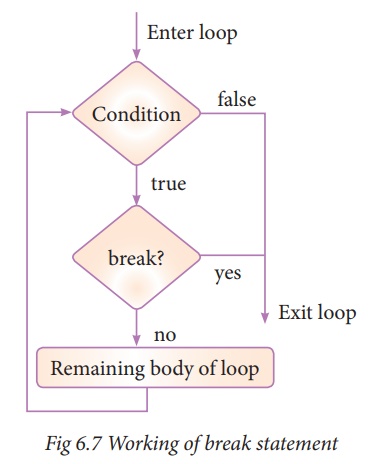 The working of break statement in for loop and while loop is shown below. 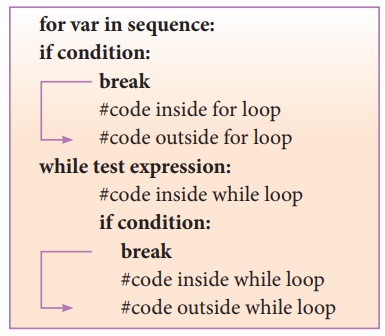 Program to illustrate the use of break statement inside for loop

The above program will repeat the iteration with the given “Jump Statement” as string. Each letter of the given string sequence is tested till the letter ‘e’ is encountered, when it is encountered the control is transferred outside the loop block or it terminates. As shown in the output, it is displayed till the letter ‘e’ is checked after which the loop gets terminated.

One has to note an important point here is that ‘if a loop is left by break, the else part is not executed’. To explain this lets us enhance the previous program with an ‘else’ part and see what output will be:

Program to illustrate the use of break statement inside for loop

End of the program

Note that the break statement has even skipped the ‘else’ part of the loop and has transferred the control to the next line following the loop block.

Continue statement unlike the break statement is used to skip the remaining part of a loop and start with next iteration. 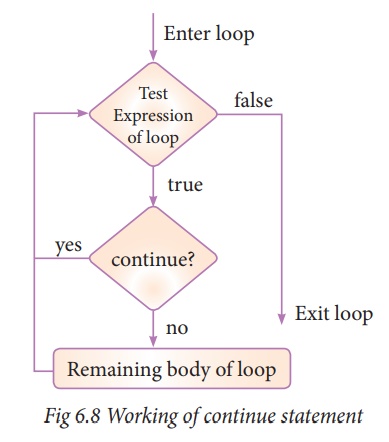 The working of continue statement in for and while loop is shown below. 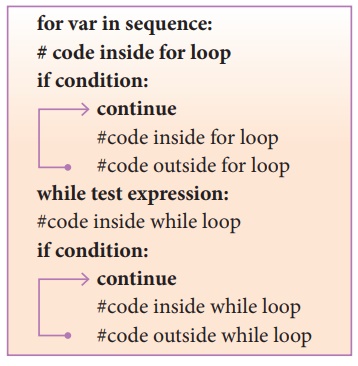 Program to illustrate the use of continue statement inside for loop

End of the program

The above program is same as the program we had written for ‘break’ statement except that we have replaced it with ‘continue’. As you can see in the output except the letter ‘e’ all the other letters get printed.

pass statement in Python programming is a null statement. pass statement when executed by the interpreter it is completely ignored. Nothing happens when pass is executed, it results in no operation.

pass statement can be used in ‘if’ clause as well as within loop construct, when you do not want any statements or commands within that block to be executed.

Program to illustrate the use of pass statement

When the above code is executed if the input value is 0 (zero) then no action will be performed, for all the other input values the output will be as follows:

pass statement is generally used as a placeholder. When we have a loop or function that is to be implemented in the future and not now, we cannot develop such functions or loops with empty body segment because the interpreter would raise an error. So, to avoid this we can use pass statement to construct a body that does nothing.

Example 6.18: Program to illustrate the use of pass statement in for loop

for val in “Computer”:

print (“End of the loop, loop structure will be built in future”)

End of the loop, loop structure will be built in future.