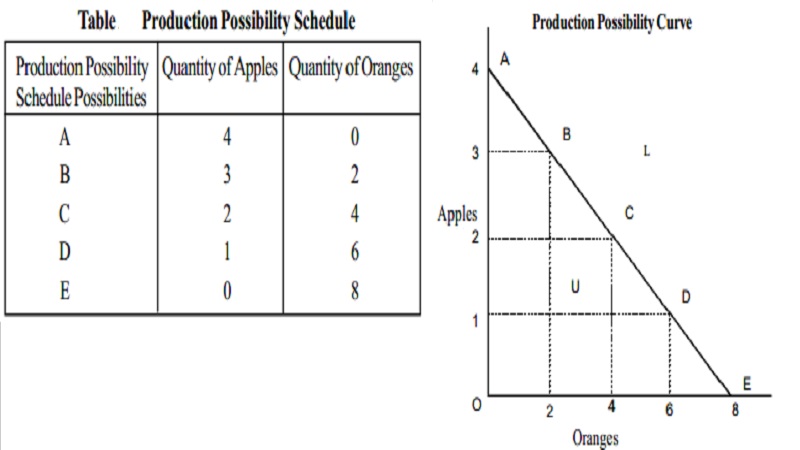 Another important question about the basic economic problems is: How do we make choice in an economy?. At the individual level you must choose among alternatives like,

whether to watch cricket highlights in T.V. or study for another extra hour;

whether to buy a text book for Rs.50 or spend the money for a movie;

whether to help your mother in shopping or play hockey during that time;

It is important to note that choices are made due to scarcity. If there is no scarcity, there would be no need to choose. Similarly as choice must be made from alternatives, it involves comparison of cost and benefit.

Like the individuals, a society as whole has limited resources. It has to decide what to produce with the limited resource. It has to make choice about the quantity of different commodities. Choice emanates from scarcity. Thus our choice is always constrained or limited by scarcity of our resources. Suppose we have enough resources we can produce all that we want.

All such choices can be made with help of production possibility curve. The production-possibility curve separates outcomes that are possible for the society to produce from those which cannot be produced subject to the available resources.

Let us consider an economy with only so many people, so many industries, so much of electricity and natural resources in deciding what shall be produced and how these resources are to be allocated among thousands of different possible commodities. How many industries are to produce steel? How much electricity to be provided for agriculture; how much for industries?. Whether to provide free electricity to farmer or not? Theses problems are complicated. Therefore, to simplify let us assume there are only two goods to be produced - apples and oranges.

Thus we see that if we are willing to have more of oranges, we should be willing to sacrifice more of apples. For instance, to reach possibility C from B, the economy produces 2 units more of oranges by sacrificing 1 unit of apples. A full employment economy must always-in producing one good be giving up something of another. This assumes of course, that at least some resources can be transferred from one good to another.

Such choice of one particular alternative involves opportunity cost of foregoing the other. Hence, the decisions of the society will be based on the comparison of costs and benefits of each alternative. In doing so, both the monetary and social cost and benefit should be the basis of any choice. Thus the one that gives the maximum benefit at minimum cost to the whole society should be the best choice. We can picture the production possibility schedule by drawing a smooth curve (Figure 2.1).