Pharmacodynamics is the study of the drug mechanisms that pro-duce biochemical or physiologic changes in the body.

Pharmacodynamics is the study of the drug mechanisms that pro-duce biochemical or physiologic changes in the body. The inter-action at the cellular level between a drug and cellular compo-nents, such as the complex proteins that make up the cell mem-brane, enzymes, or target receptors, represents drug action. The response resulting from this drug action is the drug effect.

It’s the cell that matters

A drug can modify cell function or rate of function, but it can’t impart a new function to a cell or to target tissue. Therefore, the drug effect depends on what the cell is capable of accomplish-ing.

A drug can alter the target cell’s function by:

Many drugs work by stimulating or blocking drug receptors. A drug attracted to a receptor displays an affinity for that receptor. When a drug displays an affinity for a receptor and stimulates it, the drug acts as an agonist. An agonist binds to the receptor and produces a response. This ability to initiate a response after bind-ing with the receptor is referred to as intrinsic activity.

If a drug has an affinity for a receptor but displays little or no in-trinsic activity, it’s called an antagonist. An antagonist prevents a response from occurring.

Antagonists can be competitive or noncompetitive.

·                 A competitive antagonist competes with the agonist for recep-tor sites. Because this type of antagonist binds reversibly to the re-ceptor site, administering larger doses of an agonist can overcome the antagonist’s effects.

If a drug acts on a variety of receptors, it’s said to be nonselective and can cause multiple and widespread effects. In addition, some receptors are classified further by their specific effects. For exam-ple, beta receptors typically produce increased heart rate and bronchial relaxation as well as other systemic effects.

Drug potency refers to the relative amount of a drug required to produce a desired response. Drug potency is also used to compare two drugs. If drug X produces the same response as drug Y but at a lower dose, then drug X is more potent than drug Y.

Most drugs produce multiple effects. The relationship between a drug’s desired therapeutic effects and its adverse effects is called the drug’s therapeutic index. It’s also referred to as its margin of safety.

The therapeutic index usually measures the differ-ence between: 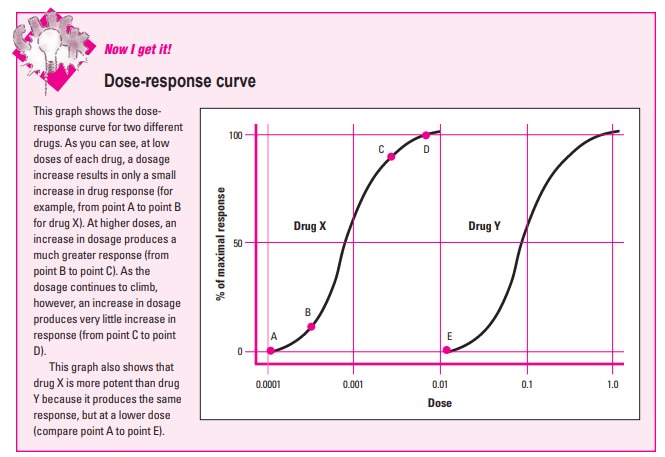