Chapter: An Introduction to Parallel Programming : Distributed-Memory Programming with MPI

Let’s take a look at the performance of the matrix-vector multiplication program. For the most part we write parallel programs because we expect that they’ll be faster than a serial program that solves the same problem.

Let’s take a look at the performance of the matrix-vector multiplication program. For the most part we write parallel programs because we expect that they’ll be faster than a serial program that solves the same problem. How can we verify this? We spent some time discussing this in Section 2.6, so we’ll start by recalling some of the material we learned there.

Program 3.13: The Get input function with a derived datatype

We’re only interested in the time it takes to do the actual multiplication, so we need to modify our source code by adding in calls to a function that will tell us the amount of time that elapses from the beginning to the end of the actual matrix-vector mul-tiplication. MPI provides a function, MPI Wtime, that returns the number of seconds that have elapsed since some time in the past:

Thus, we can time a block of MPI code as follows:

In order to time serial code, it’s not necessary to link in the MPI libraries. There is a POSIX library function called gettimeofday that returns the number of microsec-onds that have elapsed since some point in the past. The syntax details aren’t too important. There’s a C macro GET TIME defined in the header file timer.h that can be downloaded from the book’s website. This macro should be called with a double argument:

After executing this macro, now will store the number of seconds since some time in the past. We can get the elapsed time of serial code with microsecond resolution by executing

One point to stress here: GET TIME is a macro, so the code that defines it is inserted directly into your source code by the preprocessor. Hence, it can operate directly on its argument, and the argument is a double, not a pointer to a double. A final note in this connection: Since timer.h is not in the system include file directory, it’s necessary to tell the compiler where to find it if it’s not in the directory where you’re compiling. For example, if it’s in the directory /home/peter/my include, the following command can be used to compile a serial program that uses GET TIME:

Both MPI Wtime and GET TIME return wall clock time. Recall that a timer like the C clock function returns CPU time—the time spent in user code, library functions, and operating system code. It doesn’t include idle time, which can be a significant part of parallel run time. For example, a call to MPI Recv may spend a significant amount of time waiting for the arrival of a message. Wall clock time, on the other hand, gives total elapsed time, so it includes idle time.

There are still a few remaining issues. First, as we’ve described it, our parallel program will report comm sz times, one for each process. We would like to have it report a single time. Ideally, all of the processes would start execution of the matrix-vector multiplication at the same time, and then, we would report the time that elapsed when the last process finished. In other words, the parallel execution time would be the time it took the “slowest” process to finish. We can’t get exactly this time because we can’t insure that all the processes start at the same instant. However, we can come reasonably close. The MPI collective communication function MPI Barrier insures that no process will return from calling it until every process in the communicator has started calling it. It’s syntax is

The following code can be used to time a block of MPI code and report a single elapsed time:

Note that the call to MPI_Reduce is using the MPI_MAX operator; it finds the largest of the input arguments local elapsed.

As we noted in Chapter 2, we also need to be aware of variability in timings: when we run a program several times, we’re likely to see a substantial variation in the times. This will be true even if for each run we use the same input, the same number of processes, and the same system. This is because the interaction of the program with the rest of the system, especially the operating system, is unpredictable. Since this interaction will almost certainly not make the program run faster than it would run on a “quiet” system, we usually report the minimum run-time rather than the mean or median. (For further discussion of this, see [5].)

Finally, when we run an MPI program on a hybrid system in which the nodes are multicore processors, we’ll only run one MPI process on each node. This may reduce contention for the interconnect and result in somewhat better run-times. It may also reduce variability in run-times.

The results of timing the matrix-vector multiplication program are shown in Table 3.5. The input matrices were square. The times shown are in milliseconds, 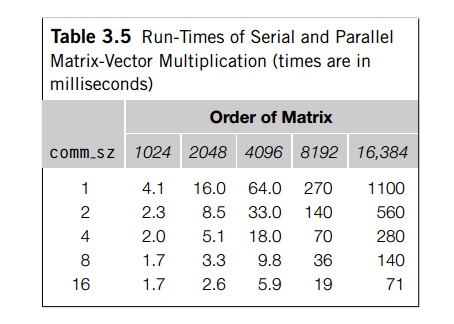 and we’ve rounded each time to two significant digits. The times for comm_sz = 1 are the run-times of the serial program running on a single core of the distributed-memory system. Not surprisingly, if we fix comm_sz, and increase n, the order of the matrix, the run-times increase. For relatively small numbers of processes, doubling n results in roughly a four-fold increase in the run-time. However, for large numbers of processes, this formula breaks down.

If we fix n and increase comm_sz, the run-times usually decrease. In fact, for large values of n, doubling the number of processes roughly halves the overall run-time. However, for small n, there is very little benefit in increasing comm sz. In fact, in going from 8 to 16 processes when n = 1024, the overall run time is unchanged.

These timings are fairly typical of parallel run-times—as we increase the problem size, the run-times increase, and this is true regardless of the number of processes. The rate of increase can be fairly constant (e.g., the one-process times) or it can vary wildly (e.g., the 16-process times). As we increase the number of processes, the run-times typically decrease for a while. However, at some point, the run-times can actually start to get worse. The closest we came to this behavior was going from 8 to 16 processes when the matrix had order 1024.

The explanation for this is that there is a fairly common relation between the run-times of serial programs and the run-times of corresponding parallel programs. Recall that we denote the serial run-time by Tserial. Since it typically depends on the size of the input, n, we’ll frequently denote it as Tserial(n). Also recall that we denote the parallel run-time by Tparallel. Since it depends on both the input size, n, and the number of processes, comm_sz= p, we’ll frequently denote it as Tparallel(n, p). As we noted in Chapter 2, it’s often the case that the parallel program will divide the work of the serial program among the processes, and add in some overhead time, which we denoted Toverhead:

In MPI programs, the parallel overhead typically comes from communication, and it can depend on both the problem size and the number of processes.

It’s not too hard to see that this formula applies to our matrix-vector multiplication program. The heart of the serial program is the pair of nested for loops:

for some constant a. (The symbol ~~ means “is approximately equal to.”)

If the serial program multiplies an nx n matrix by an n-dimensional vector, then each process in the parallel program multiplies an n/p x n matrix by an n-dimensional vector. The local matrix-vector multiplication part of the parallel pro-gram therefore executes n2/p floating point operations. Thus, it appears that this local matrix-vector multiplication reduces the work per process by a factor of p.

However, the parallel program also needs to complete a call to MPI_Allgather before it can carry out the local matrix-vector multiplication. In our example, it appears that

Furthermore, in light of our timing data, it appears that for smaller values of p and larger values of n, the dominant term in our formula is Tserial(n)=p. To see this, observe first that for small p (e.g., p = 2, 4), doubling p roughly halves the overall run-time. For example,

Also, if we fix p at a small value (e.g., p = 2, 4), then increasing n seems to have approximately the same effect as increasing n for the serial program. For example,

These observations suggest that the parallel run-times are behaving much as the run-times of the serial program - that is, Tparallel(n, p) is approximately Tserial(n)/p - so the overhead Tallgather has little effect on the performance.

On the other hand, for small n and large p these patterns break down. For example,

Thus, it appears that for small n and large p, the dominant term in our formula for

The ideal value for S(n, p) is p. If S(n, p) = p, then our parallel program with comm._sz = p processes is running p times faster than the serial program. In practice, this speedup, sometimes called linear speedup, is rarely achieved. Our matrix-vector multiplication program got the speedups shown in Table 3.6. For small p and large n, our program obtained nearly linear speedup. On the other hand, for large p and small n, the speedup was considerably less than p. The worst case was n = 1024 and p = 16, when we only managed a speedup of 2.4. 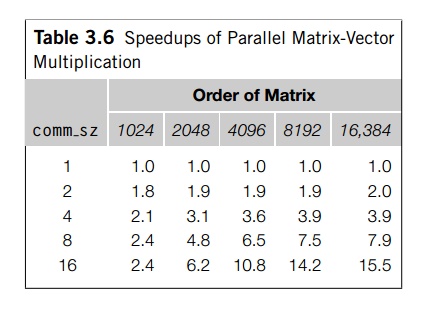 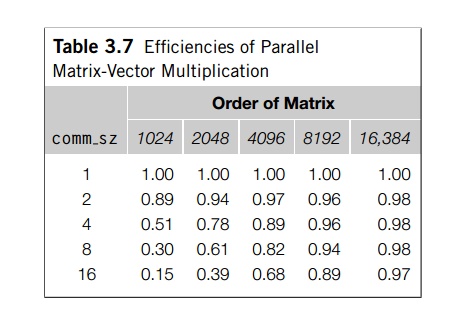 Also recall that another widely used measure of parallel performance is parallel efficiency. This is “per process” speedup:

Linear speedup corresponds to a parallel efficiency of p/p = 1.0, and, in general, we expect that our efficiencies will be less than 1.

The efficiencies for the matrix-vector multiplication program are shown in Table 3.7. Once again, for small p and large n our parallel efficiencies are near linear, and for large p and small n, they are very far from linear.

Our parallel matrix-vector multiplication program doesn’t come close to obtaining linear speedup for small n and large p. Does this mean that it’s not a good program? Many computer scientists answer this question by looking at the “scalability” of the program. Recall that very roughly speaking, a program is scalable if the problem size can be increased at a rate so that the efficiency doesn’t decrease as the number of processes increase.

Looking at our table of parallel efficiencies (Table 3.7), we see that our matrix-vector multiplication program definitely doesn’t have the same scalability as program A: in almost every case when p is increased, the efficiency decreases. On the other hand, the program is somewhat like program B: if p>=2 and we increase both p and n by a factor of 2, the parallel efficiency, for the most part, actually increases. Furthermore, the only exceptions occur when we increase p from 2 to 4, and when computer scientists discuss scalability, they’re usually interested in large values of p. When p is increased from 4 to 8 or from 8 to 16, our efficiency always increases when we increase n by a factor of 2.