A package is a collection of modules. A Python package can have sub-packages and modules.

A package is a collection of modules. A Python package can have sub-packages and modules.

A directory must contain a file named __init__.py in order for Python to consider it as a package. This file can be left empty but we generally place the initialization code for that package in this file.

Here is an example. Suppose we are developing a game, one possible organization of packages and modules could be as shown in the figure below. 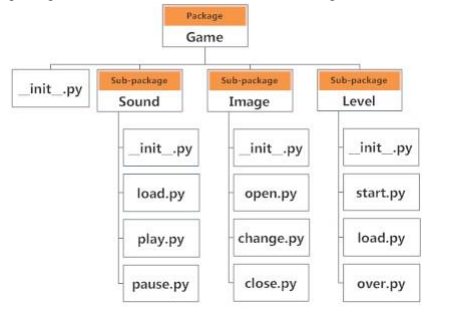 Importing module from a package

We can import modules from packages using the dot (.) operator.

For example, if want to import the start module in the above example, it is done as follows. import Game.Level.start

Now if this module contains a function named select_difficulty(), we must use the full name to reference it.

If this construct seems lengthy, we can import the module without the package prefix as follows.

We can now call the function simply as follows.

Yet another way of importing just the required function (or class or variable) form a module within a package would be as follows.

Now we can directly call this function.

Although easier, this method is not recommended. Using the full namespace avoids confusion and prevents two same identifier names from colliding.

While importing packages, Python looks in the list of directories defined in sys.path, similar as for module search path.

if word not in wordcount: