Indian Railways (IR) is at present the biggest public undertaking of the Government of India, having a capital-at-charge of about Rs 560,000 million.

Indian Railways (IR) is at present the biggest public undertaking of the Government of India, having a capital-at-charge of about Rs 560,000 million. The enactments regulating the construction and operation of railways in India are the Indian Tramway Act of 1816 and the Indian Railway Act of 1890 as amended from time to time. The executive authority in connection with the administration of the railways vests with the Central Government and the same has been delegated to the Railway Board as per the Indian Railway Act referred to above.

The responsibility of the administration and management of Indian Railways rests with the Railway Board under the overall supervision of the Minister for Railways. The Railway Board exercises all the powers of the Central Government in respect of the regulation, construction, maintenance, and operation of the Railways.

The Railway Board consists of a chairman, a financial commissioner for railways, and five other functional members. The chairman is the ex-officio principal secretary to the Government of India in the Ministry of Railways. He reports to the Minister for Railways and is responsible for making decisions on technical and administrative matters and advising the Government of India on matters of railway policy. All policy and other important matters are put up to the Minister through the chairman or other board members.

To be able to effectively tackle the additional duties and responsibilities arising from increased tempo of work, the Railway Board is assisted by a number of technical officers designated additional members and executive directors, who are in-charge of different directorates such as civil engineering, mechanical, electrical, stores, traffic and transportation, commercial, and planning and are responsible for carrying out technical functions. These officers, however, do not make major policy decisions.

The Research Designs and Standards Organisation (RDSO) is headquartered at Lucknow. It is headed by a director general who has a team of specialists from different fields of railways. RDSO functions as a technical adviser and consultant to the Railway Board, the zonal railways, and production units as well as to public and private sector undertakings with respect to the designs and standardization of railway equipment.

RDSO has also been approved for its quality management system ISO 9001:2000.

Presently, Indian Railways is divided into 16 zones, each having different territorial jurisdictions which vary from 2300 to 7000 route km. The route kilometres of various zonal railways are given in Table 1.3. 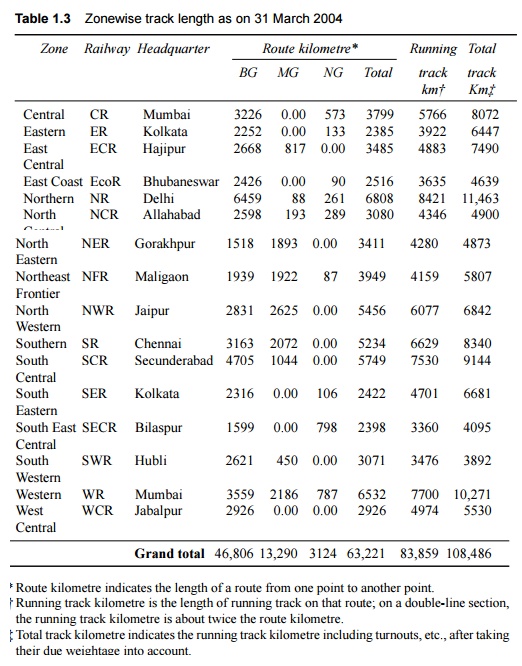 Route kilometre indicates the length of a route from one point to another point.

The zonal railways take care of the railway business in their respective areas and are responsible for management and planning of all work. Each zonal railway is administered by a general manager assisted by additional general managers and heads of departments of different disciplines, namely, civil engineering, mechanical, operating, commercial, accounts, security, signals and telecommunications, electrical, personnel, medical, etc. The typical organization of a zonal railway is given in Fig. 1.1. The duties of the various heads of departments are given in Table 1.4. 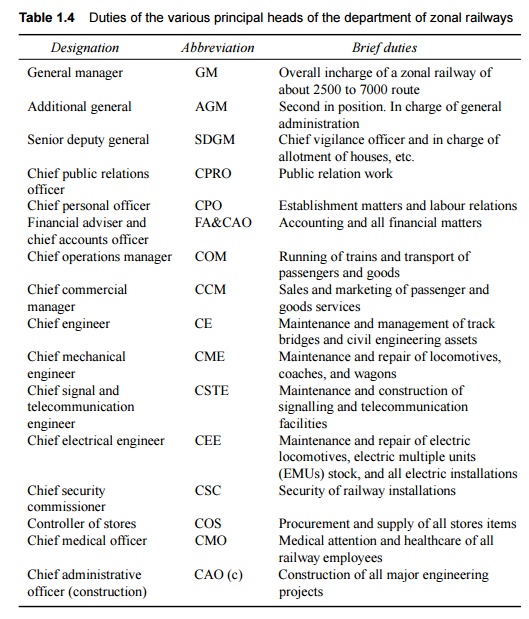 Apart from zonal railways, there are six production units. The details given in Table 1.5.

The Central Organisation for Modernization of Workshops (COFMOW) was set up in 1979 as a specialized agency to implement the various workshop modernization programs of Indian Railways. Most of the workshops of IR are over 100 years old and COFMOW is modernizing these workshops in a planned way with the assistance of the World Bank.

COFMOW has been actively involved in the conversion of metre gauge rolling stock repair workshops to broad gauge repair shops by identifying and selecting compatible machinery and plants. At present, COFMOW is actively involved in the upgradation of manufacturing facilities at DLW and CLW to equip them to manufacture state-of-the-art locomotives of General Motors and Alstom design, respectively.

COFMOW has recently assisted Indian Railways in placing an order for 12 locomotive simulators at a total cost of Rs 980 million. These simulators will help the Railways in providing safe and efficient operation of trains to meet the demands of increasing traffic by training the staff under simulated operating conditions.

In the case of the engineering branch, the DSE or senior divisional engineer is normally the head of the unit in the division. Under each DSE, there are two to three divisional engineers (DENs), each in charge of approximately a 800 to 1000 integrated track km and assisted by two to three assistant engineers (AENs) in the maintenance of track and works. An AEN has about 400 integrated track km under his charge. The total number of DENs and AENs for maintenance work in Indian Railways is approximately 300 and 600, respectively. The AENs are assisted by permanent way inspectors (PWI) for maintenance of track structure. Each PWI has a jurisdiction of 50-70 route km of the track. The total number of PWIs for normal maintenance work on Indian Railways is roughly 3000.