Ø   control of power on the ac line over a wide range.

Ø   The principle of variable-series compensation is simply to increase the fundamental-frequency voltage across an fixed capacitor (FC) in a series compensated line through appropriate variation of the firing angle.

Ø   This enhanced voltage changes the effective value of the series-capacitive reactance. A simple understanding of TCSC functioning can be obtained by analyzing the behavior of a variable inductor connected in parallel with an FC, as shown in Fig.

Ø   The equivalent impedance, Zeq, of this LC combination is expressed as

Ø   If ωC − (1/ ωL) c 0, a resonance develops that results in an infinite-capacitive impedance is obviously unacceptable condition.

Ø   If, however, ωC − (1/ ωL) < 0, the LC combination provides inductance above the value of the fixed inductor. This situation corresponds to the inductive-vernier mode of the TCSC operation.

Ø   In the variable-capacitance mode of the TCSC, as the inductive reactance of the variable inductor is increased, the equivalent-capacitive eactance is gradually decreased.

Ø   The minimum equivalent-capacitive reactance is obtained for extremely large inductive reactance or when the variable inductor is open-circuited, in which the value is equal to the reactance of the FC itself.

Ø   The behavior of the TCSC is similar to that of the parallel LC combination. 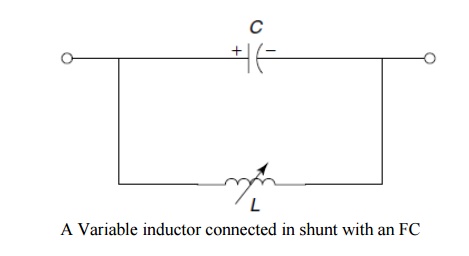 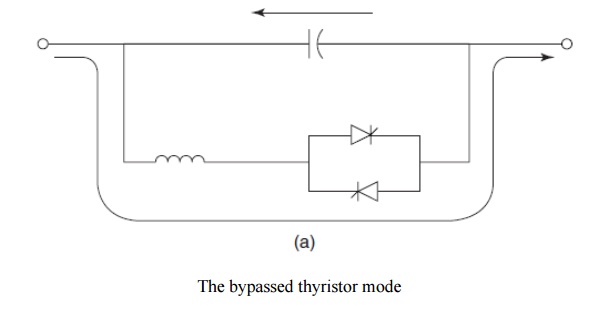 Ø   In this bypassed mode, the thyristors are made to fully conduct with a conduction angle of 180. Gate pulses are applied as soon as the voltage across the thyristors reaches zero and becomes positive, resulting in a continuous sinusoidal of flow current through the thyristor valves.

Ø   The TCSC module behaves like a parallel capacitor–inductor combination. However, the net current through the module is inductive, for the susceptance of the reactor is chosen to be greater than that of the capacitor.

Ø   Also known as the thyristor-switched-reactor (TSR) mode, the bypassed thyristor mode is distinct from the bypassed-breaker mode, in which the circuit breaker provided across the series capacitor is closed to remove the capacitor or the TCSC module in the event of TCSC faults or transient over voltages across the TCSC.

Ø   This mode is employed for control purposes and also for initiating certain protective functions.

Ø   Whenever a TCSC module is bypassed from the violation of the current limit, a finite-time delay, T delay, must elapse before the module can be reinserted after the line current falls below the specified limit. 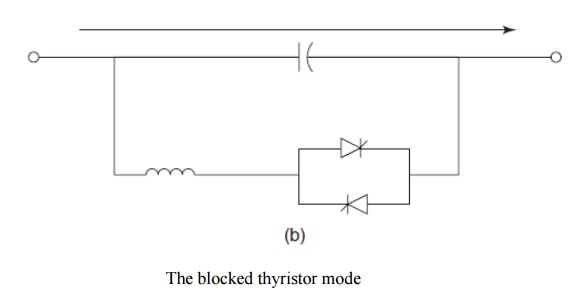 Ø   In this mode, also known as the waiting mode, the firing pulses to the thyristor valves are blocked.

Ø   If the thyristors are conducting and a blocking command is given, the thyristors turn off as soon as the current through them reaches a zero crossing.

Ø   The TCSC module is thus reduced to a fixed-series capacitor, and the net TCSC reactance is capacitive.

Ø   In this mode, the dc-offset voltages of the capacitors are monitored and quickly discharged using a dc-offset control [9] without causing any harm to the transmission-system transformers.

Ø   It is achieved by varying the thyristor-pair firing angle in an appropriate range. However, a smooth transition from the capacitive to inductive mode is not permitted because of the resonant region between the two modes.

Ø   A variant of this mode is the capacitive-vernier-control mode, in which the thyristors are fired when the capacitor voltage and capacitor current have opposite polarity.

Ø   This condition causes a TCR current that has a direction opposite that of the capacitor current, thereby resulting in a loop-current flow in the TCSC controller.

Ø   The loop current increases the voltage across the FC, effectively enhancing the equivalent-capacitive reactance and the series-compensation level for the same value of line current.

Ø   To preclude resonance, the firing angle α of the forward-facing thyristor, as measured from the positive reaching a zero crossing of the capacitor voltage, is constrained in the range α min ≤ α ≤ 1800.

Ø   This constraint provides a continuous vernier control of the TCSC module reactance. The loop current increases as α is decreased from 1800 to α min.

Ø   The maximum TCSC reactance permissible with a c α min is typically two-and-a-half to three times the capacitor reactance at fundamental frequency.

Ø   Another variant is the inductive-vernier mode, in which the TCSC can be operated by having a high level of thyristor conduction.

Ø   In this mode, the direction of the circulating current is reversed and the controller presents a net inductive impedance.

Ø    Based on the three modes of thyristor-valve operation, two variants of the TCSC emerge:

1. Thyristor-switched series capacitor (TSSC), which permits a discrete control of the capacitive reactance.