Shocks which occur in a plane normal to the direction of flow are called normal shock waves. Flow process through the shock wave is highly irreversible and cannot be approximated as being isentropic. Develop relationships for flow properties before and after the shock using conservation of mass, momentum, and energy.

In some range of back pressure, the fluid that achieved a sonic velocity at the throat of a converging-diverging nozzle and is accelerating to supersonic velocities in the diverging section experiences a normal shock. The normal shock causes a sudden rise in pressure and temperature and a sudden drop in velocity to subsonic levels. Flow through the shock is highly irreversible, and thus it cannot be approximated as isentropic. The properties of an ideal gas with constant specific heats before (subscript 1) and after (subscript 2) a shock are related by

Ø Steady flow and one dimensional

Ø dA = 0, because shock thickness is small

Ø Negligible friction at duct walls since shock is very thin

Ø Adiabatic flow (since area is small) 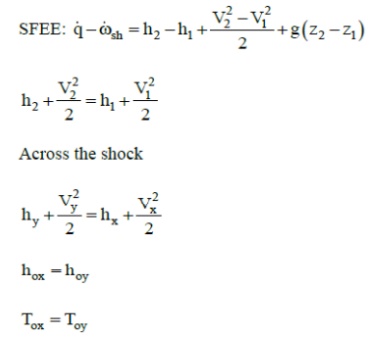 To remains constant across the shock. 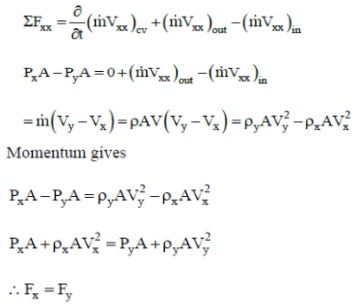 Property relations across the shock. 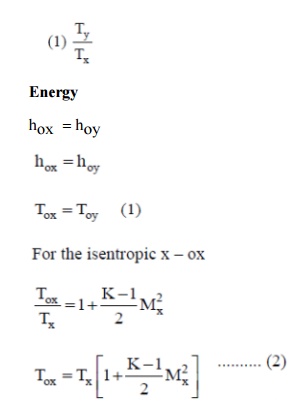 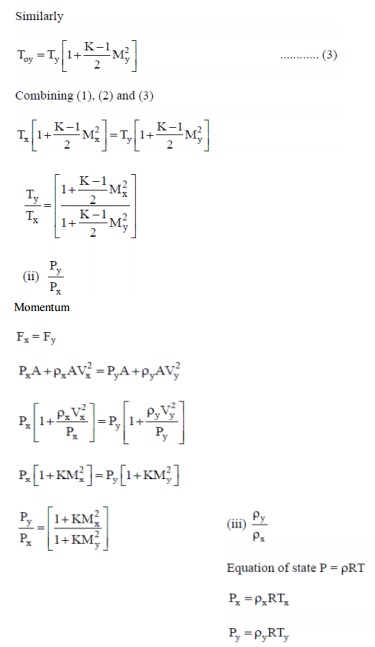 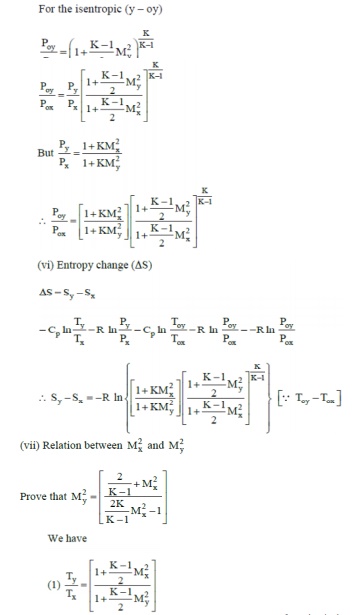 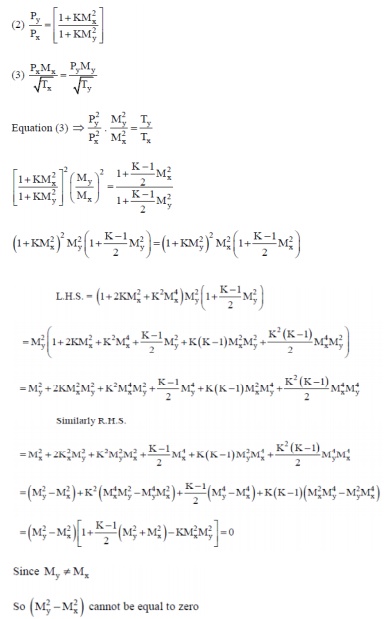 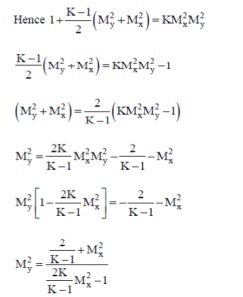 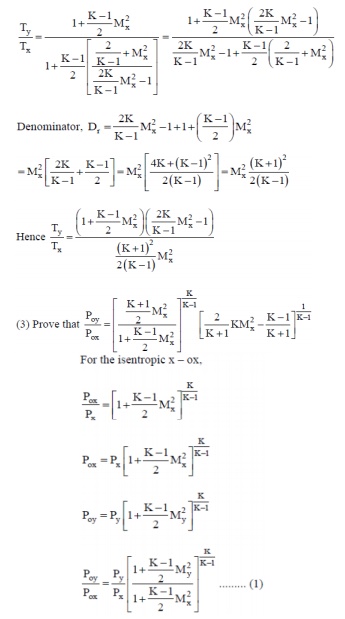 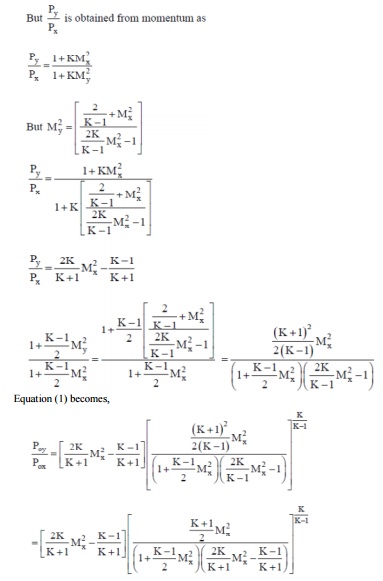 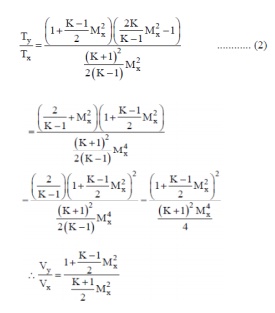 Governing relations for a normal shock 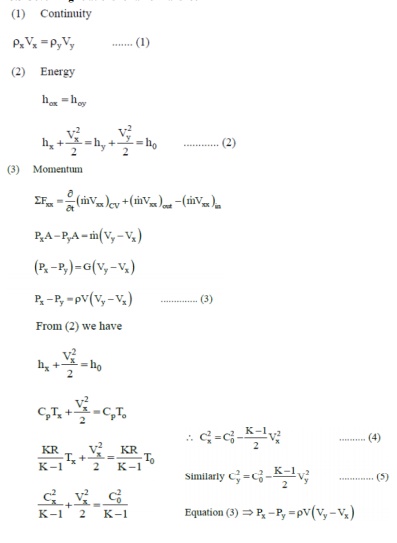 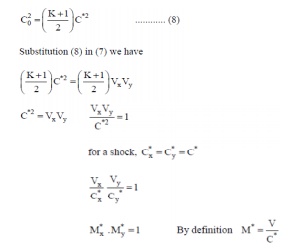 Density Ratio Across the Shock

We know that density,

the above eqn.s is knows Rankine - Hugoniot equations.

Strength of a Shock Wave 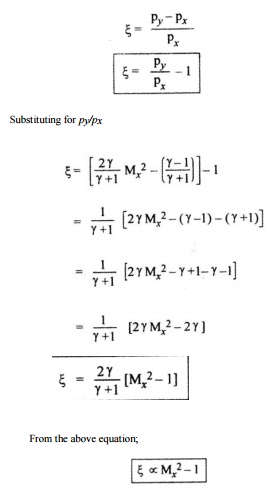 The strength of shock wave may be expressed in another form using Rankine-Hugoniot equation.

From this equation we came to know strength of shock wave is directly proportional to;

1.The state of a gas (γ=1.3,R =0.469 KJ/KgK.) upstream of normal shock wave is given by the following data: Mx =2.5, Px =2 bar. Tx =275 K calculate the Mach number,pressure,temperatureand velocity of a gas down stream of shock: check the calculated values with those given in the gas tables.Take K =γ.

2.  An Aircraft flies at a Mach number of 1.1 at an altitude of 15,000 metres.The compression in its engine is partially achieved by a normal shock wave standing at the entry of the diffuser. Determine the following for downstream of the shock.

2. Temperature of the air

3. Pressure of the air

4. Stagnation pressure loss across the shock.

3. Supersonic nozzle is provided with a constant diameter circular duct at its exit. The duct diameter is same as the nozzle diameter. Nozzle exit cross ection is three times that of its throat. The entry conditions of the gas (γ=1.4, R= 287J/KgK) are P0 =10 bar, T0 =600K. Calculate the static pressure, Mach number and velocity of the gas in duct. 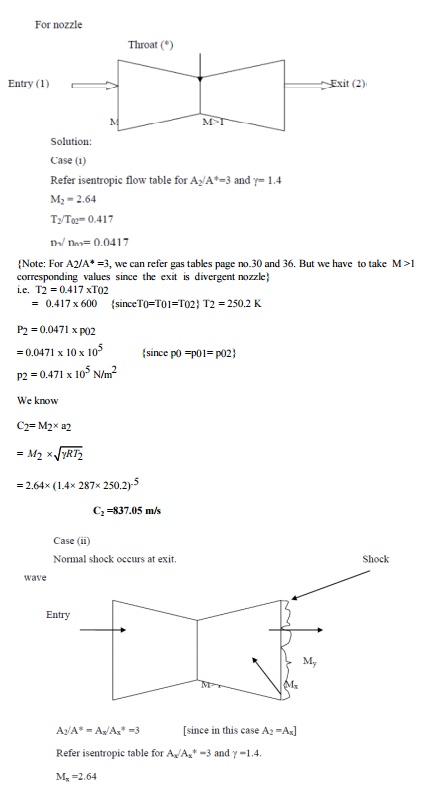 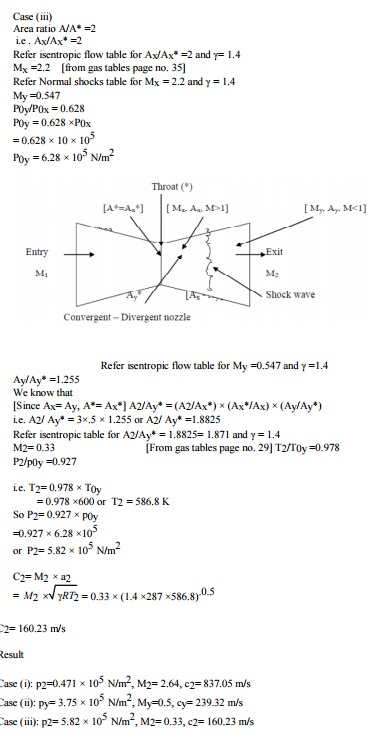 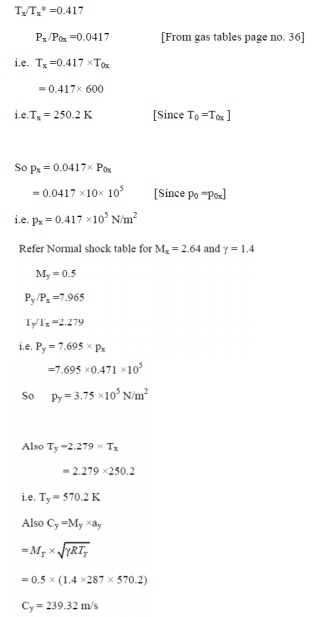 1) The state of a gas (γ=1.3,R =0.469 KJ/Kg K) upstream of a normal shock is given by the following data: Mx =2.5, px= 2bar ,Tx =275K calculate the Mach number, pressure,temperature and velocity of the gas downstream of the shock;check the calculated values with those give in the gas tables.

2) The ratio of th exit to entry area in a subsonic diffuser is 4.0 .The Mach number of a jet of air approaching the diffuser at p0=1.013 bar, T =290 K is 2.2 .There is a standing normal shock wave just outside the diffuser entry. The flow in the diffuser is isentropic . Determine at the exit of the diffuser.a) Mach number , b) Temperature, and c) Pressure d) What is the stagnation pressure loss between the initial and final states of the flow ?