Acute myelogenous leukemia is a cancer of the myeloid line of blood cells.

Acute myelogenous leukemia is a cancer of the myeloid line of blood cells. Median age at diagnosis is age 50. Symptoms include fatigue, unusual bleeding, and infec-tions.

Lab findings: Myeloid blasts or promyelocytes represent at least 20% of the marrow cells. Auer rods (linear condensations of cytoplasmic granules) are characteristic of AML and are not found in normal myeloid precursors.

The WHO classification of AML (2008) is as follows:

•         AML with recurrent genetic abnormalities (for some of these entities, the karyotype is diagnostic regardless of the blast percentage)

MDS are classified according to the number of blasts in the marrow. Dysplastic changes include Pelger-Huët cells (“aviator glasses” nuclei), ring sideroblasts, nuclear budding, and “pawn ball” megakaryocytes. MDS are considered preleukemias, so patients are at increased risk for developing acute leukemia.

Chronic myelogenous leukemia (CML) is a clonal proliferation of pluripotent granulocytic precursor stem cells. In most cases it is associated with a BCR-ABL fusion gene due to a balanced (9;22) translocation; however, this Phila-delphia chromosome is not specific to CML. 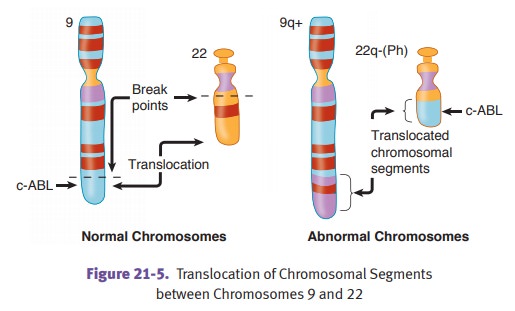 Microscopically, the bone marrow is hypercellular, with all cell lines increased in number. Peripheral leukocytosis is present, including mark-edly increased neutrophils (and bands and metamyelocytes), as well as increased eosinophils and basophils (as in the other MPS).

Polycythemia vera is a stem cell disorder with trilineage (erythroid, granulo-cytic, megakaryocytic) proliferation. It may develop into a “spent phase” with myelofibrosis. It causes an increased risk for acute leukemia. Phlebotomy is therapeutic.

•         Increased blood viscosity, which can cause deep vein thrombosis and infarcts

•         Increased basophils. Histamine release from basophils can cause intense pruritus and gastric ulcer (bleeding may cause iron deficiency).

•         High cell turnover can cause hyperuricemia, resulting in gout. Other clinical characteristics include plethora (redness) and cyanosis (blue).

Essential thrombocythemia is characterized by increased megakaryocytes (and other cell lines) in bone marrow. Peripheral blood smear shows increased platelets, some with abnormal shapes. There are also increased leukocytes. Clinical signs include excessive bleeding and occlusion of small vessels.

•         Marrow fibrosis is secondary to factors released from megakaryocytes, such as platelet-derived growth factor (PDGF).

•         Bone marrow aspiration may be a “dry tap.” The biopsy specimen shows hypocellular marrow with fibrosis (increased reticulin). The fibroblasts are a polyclonal proliferation and are not neoplastic. 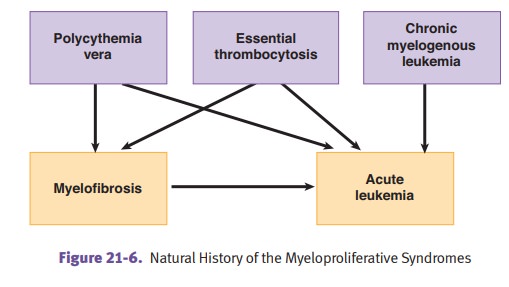