Learning Objectives - After completing this lesson students will be able to: • know about matter and materials. • understand the process of manufacturing fabrics. • know the varieties of grains and the food products. • understand why do things float or sink.

After completing this lesson students will be able to:

• know about matter and materials.

• understand the process of manufacturing fabrics.

• know the varieties of grains and the food products.

• understand why do things float or sink.

Our needs have increased in the modern days and we use number of things in our daily life. We get some of them from the nature and some other things are manufactured artificially. The things you use like pen, pencil, ink, eraser, note book, ball and the food you eat, all have different nature and characteristics. They are obtained by transforming the natural and artificial substances. In this lesson we will study about different things used in our life and how they are obtained.

I. States of Matter

Matter is anything that has mass and occupies space. Matter can exist in three physical states: solid, liquid and gas. It is made up of molecules and the molecules are made up of atoms.

In solids molecules are very closely arranged. Solids are incompressible. They have definite shape, size and volume.

In liquids molecules are loosely packed. Hence, liquids are negligibly compressible. They have definite volume, but no definite shape and size.

Look at your surrounding. Give some examples for solids, liquids and gases. Solids Liquids gases

A material is a mixture of substances that constitute an object. They can be pure or impure, natural or man made. Materials are needed to get the things needed for our daily life. We need food, dress and many other goods for our daily living. Natural and man made materials are transformed to produce these things.

A cotton plant is a bushy plant of 5 to 6 feet high. Cotton grows well in black soil and alluvial soil. The cotton plant bears a large number of small green pods called cotton balls. These balls contain seeds covered with white fibres. When the cotton balls mature, they burst exposing the white fibre of cotton. Cotton is usually hand picked from the plants. 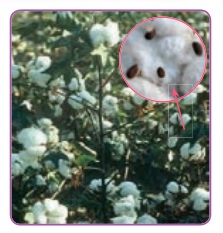 There are two processes to make cotton yarn from cotton fibre. The raw fibres are separated from the seeds by a process known as Ginning. The fibrous material left after separating cotton seeds is called lint. The lint is then tied and pressed into balls. The final proportions of short fibres and other impurities are removed by the process of combing. 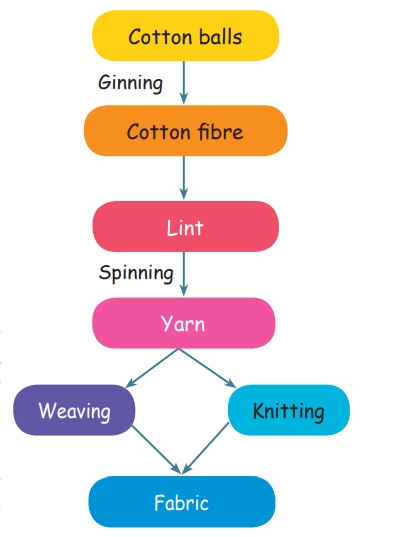 The process of making yarn from lint (fibre) is called spinning. Spinning is done on a large scale with the help of spinning machines.

Weaving and knitting are the two most important processes used for making fabric from the yarn. The process of making two sets of yarns together to make fabric is called weaving. It is done by weavers on a machine called loom. The loom are either hand – operated (hand looms) or power - operated. During knitting a single yarn is used to make a piece of fabric. It is done by hand and also on machine. 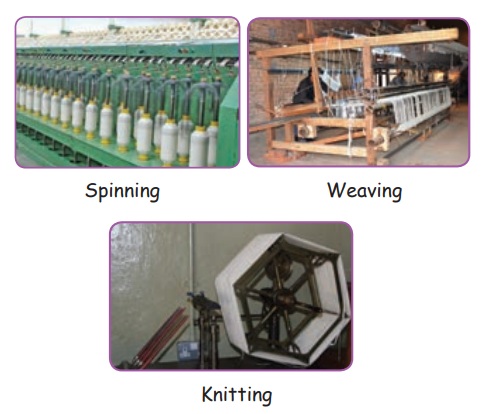 • It is used to manufacture cotton textiles and garments.

• It is used as fillers in pillows and mattresses.

• It used for making surgical bandages.

• It is used for making dhotis, sarees, bedsheets, table cloth and so on.

Jute fibre is obtained from the stem of the jute plant. Jute plant has long, soft and shiny fibres. It is also referred to as the golden fibre due to its colour and cost effectiveness. Jute fibres are separated from the process of retting jute by hand and then they are dried. These are converted into yarns in the same manner as in the case of cotton. 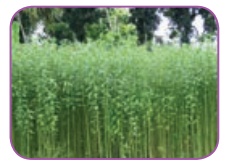 • It is used for making bags, carpets, curtains and ropes.

• It is used for making clothes for wrapping bales of raw cotton and to make socks for storing grains.

• It is used for making wall hangings for decoration. 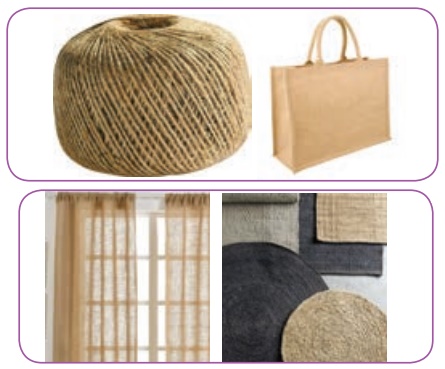 Coir fibre is obtained from the outer covering of coconut. It is used to make floor mats, door mats, brushes and mattresses. 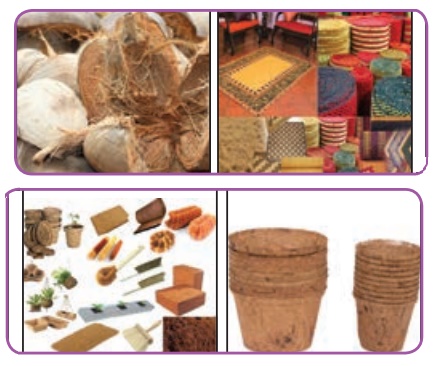 These fibres are made by human beings with the help of chemical process. Hence, they are called synthetic fibres or manmade fibres. These fibres are obtained from coal, petroleum and natural gas. 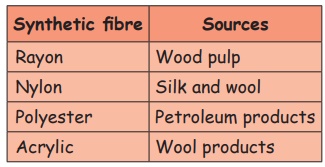 • Acrylic is used to make sweaters, shawls and blankets.

The world‛s most valuable fibre is obtained from a small wild animal called Vicuna. It belongs to a camel family.

Grain s a small, hard, dry seed. Each grain is protected by a husk and the husk encloses the seed. Two main types of commercial grain crops are cereals and legumes. Wheat, maize, rice, beans, peas, barley and millets are some of the whole grains.

This is the most important crop cultivated in the world. Whole wheat is important because it is rich in fibre, vitamins and minerals. Wheat products are: Breads, Cakes, Pasta, Wheat germ and Cracked wheat. 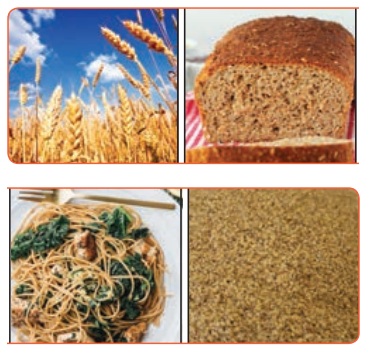 In many tropical and sub tropical countries (Mexico and America), maize is the main food that people eat. It is also known as corn. Maize is also made into oil for cooking. Yellow or coloured corn may promote eye health. It is also rich source of many vitamins and minerals. Corn syrup is used as a sweetener instead of sugar in many products. Maize products are: Sweet corn, Breakfast cereal, Tortilla chips, Taco and Maize oil. 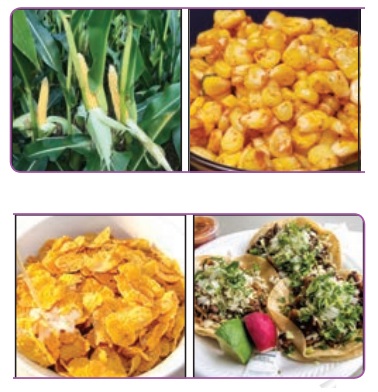 Rice is a type of grass. It is produced worldwide after sugarcane and maize. Large parts of the world‛s human population especially people in Asia have this as their main food. Ninety percent of the world‛s rice production is in Asia. White rice contains few essential nutrients. Brown rice is a whole grain that contains the fibrous bran. Brown rice is usually considered much healthier than white rice. Rice idly, Idiappam and Rice aval (Flattened rice) are the food items made from rice. 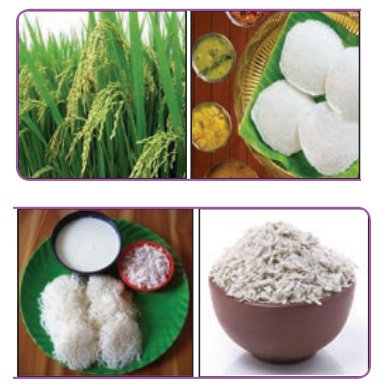 Millets are a group of small seeded grasses. They are widely grown around the world as cereal crops for fodder and human food. It helps in weight loss. It is rich in fibre. Some of the millet products are Sorghum, Fox tail millet, Finger millet, Pearl millet, Barnyard millet, Kodo millet and Little Millet. 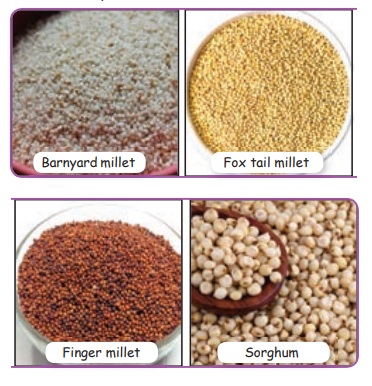 These are the products that we use in our house. The goods that are found in a house permanently are called household goods. Household goods are: Furniture, Kitchenware, Cloths, Towels, Beddings, Boots and Electronic goods. 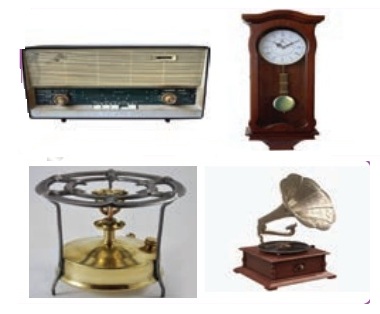 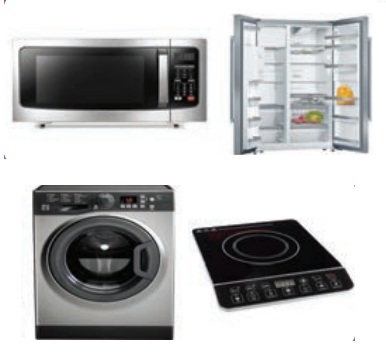 You could have seen that some objects float in water while others sink. Whether an object floats or sinks is determined by its density. When an object is immersed in a liquid, the liquid exerts an upward force on the object. It is known as upthrust. What happens if you put a coin and an empty water bottle in water? The weight of the coin is greater than the upthrust and so the coin sinks. But it is less on the empty water bottle and so it floats. 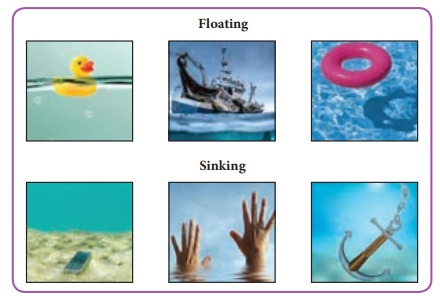 Take water in a bucket and drop the following items in the water.

Fill the table with your observation. 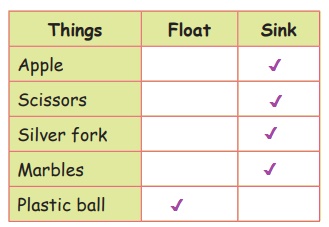 A fish can control the upthurst on its body. So it can float and go beneath the surface of the water.

VII. Solubility of Solids in Water

Collect some samples of solid substances such as salt, sugar, chalk powder, sand and saw dust.

Take five beakers filled with water and add a small amount of sugar to the first beaker, salt to the second and similarly, add small amounts of other substances in other beakers. Stir the content with a glass rod. Wait for few minutes. What happens to the substances added? Note your observation.

Certain liquids are heavier (dense) than other liquids. When you attempt to mix liquids which have different densities they separate when you stop mixing them. The heavier liquid deposits at the bottom and the lighter liquid floats on the top. 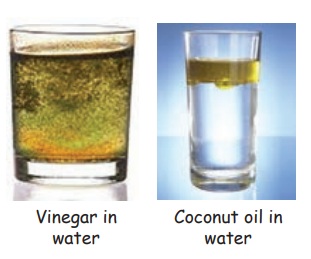 Collect samples of coconut oil, kerosene, mustard oil, lemon juice and vinegar. Take five test tubes, fill them up to half with water. Add a spoon full of one liquid to this and stir it well. Keep it in a test tube stand and wait for few minutes. Observe whether the liquid mixes with water. Repeat the experiment with other liquids and tabulate your observation.

• Substances with different chemical properties will not mix.