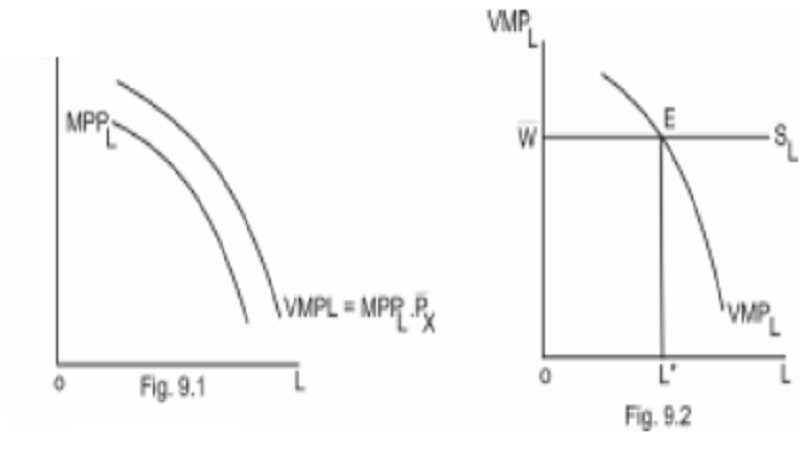 There is no fundamental difference between the mechanism of determination of factor prices and that of prices of commodities. Factor prices are determined in markets under the forces of supply and demand. But there is one difference. While the demand for commodities is direct demand, the demand for factors of production is derived demand. For example, there will be demand for workers engaged in construction industry (e.g. masons) only when there is demand for housing.

According to the marginal productivity theory of distribution, in a perfectly competitive market (for products and inputs), each factor will be paid a price equal to the value of its physical product. Though the theory is applicable to all factors of production, we may illustrate it with reference to labour.

We shall give a simple illustration of the marginal productivity theory of distribution by making use of labour.

The condition of equilibrium in the labour market is

Where MCL = Marginal cost of labour VMPL = Value of marginal product of labour. Or W = VMPL

Where W = wages of labour

Note : It is assumed that a firm can employ any amount of labour under a given wage rate as the supply of labour is assumed to be unlimited in a competitive market.

Diagrammatic Illustration of wage dermination in a competitive market

Note : P (The price is assumed to be constant under conditions of perfect competition)

In fig. , the equilibrium of the firm is shown by E. This is so because to the left of L*, each unit of labour costs less than the value of its product (VMPL > W). Hence the firm will make more profit by hiring more workers. To the right of VMPL<W. Hence, the profits of the firm will be reduced. So profits will be maximum when VMPL = W.

It follows from the above discussion that the demand curve of a firm for a single variable factor (e.g. labour) is its value of marginal product curve.

Thus the productivity of the marginal unit of a factor determines the rate that is to be paid to all units of the factor. The employer adopts the principle of substitution and combines land, labour and capital in such a way that the cost of production is minimum. Then the reward for each factor is determined by its marginal productivity. The marginal productivity theory of distribution has been used to explain the determination of rent, wages, interest and profits. That is why, it is called general theory of distribution.

Assumptions of the theory

The marginal productivity theory is based on the following assumptions.

2.        All units of a factor are homogeneous. It means that one unit of a factor is the same as the other.

3.        Factors can be substituted for each other. That is, all factors are interchangeable.

Criticism of the theory

The following are some of the points of criticism against the marginal productivity theory of distribution.

1.        Every product is a joint product and its value cannot be separately attributed to either labour or capital. Again, it is rather difficult to measure the 'productivity' of certain categories of labour like doctors, lawyers and teachers who render services.

2.        The theory takes into account only the factors operating on the side of demand by ignoring the supply side. For example, when there is scarcity of a factor, it is paid much more than the normal price.

4.        In practice, it is rather difficult to vary the use of the factors of production.

5.        The theory does not carry with it any ethical justification. If we accept the theory, it means that factors get the value of what they produce. For example, workers in a firm may get low wages not because their productivity is low but because there might be exploitation of labour. Hence we should not make use of this theory to justify the existing system of unequal distribution.

We may note that in spite of the above points of criticism against the theory, it explains the role of productivity in the determination of factor prices. In the words of Marshall, 'the doctrine throws into clear light one of the causes that govern wages'.