A list is a sequence of values. In a string, the values are characters; in a list, they can be any type.

A list is a sequence of values. In a string, the values are characters; in a list, they can be any type. The values in a list are called elements or sometimes items.

There are several ways to create a new list; the simplest is to enclose the elements in squarebrackets ([ and ]):

The first example is a list of four integers. The second is a list of three strings. The elements of a list don’t have to be the same type. The following list contains a string, a float, an integer, and (lo!) another list:

Remember that the indices start at 0: 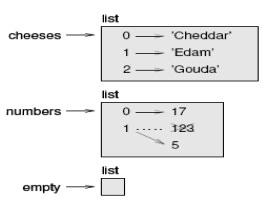 Unlike strings, lists are mutable. When the bracket operator appears on the left side of anassignment, it identifies the element of the list that will be assigned.

A list as a relationship between indices and elements. This relationship is called a mapping; each index “maps to” one of the elements.

The in operator also works on lists.

The most common way to traverse the elements of a list is with a for loop. The syntax is the same as for strings:

for cheese in cheeses:

This works well if you only need to read the elements of the list. But if you want to write or update the elements, you need the indices. A common way to do that is to combine the functions range and len:

This loop traverses the list and updates each element. len returns the number of elements in the list. range returns a list of indices from 0 to n 1, where n is the length of the list. Each time through the loop i gets the index of the next element. The assignment statement in the body uses i to read the old value of the element and to assign the new value. A for loop over an empty list never executes the body:

Similarly, the * operator repeats a list a given number of times:

Since lists are mutable, it is often useful to make a copy before performing operations that fold, spindle or mutilate lists.

A slice operator on the left side of an assignment can update multiple elements:

Python provides methods that operate on lists. For example, append adds a new element to the end of a list:

extend takes a list as an argument and appends all of the elements:

sort arranges the elements of the list from low to high:

In Python lists are considered a type of iterable . An iterable is a data type that can return its elements separately, i.e., one at a time.

total is initialized to 0. Each time through the loop, x gets one element from the list. The += operator provides a short way to update a variable. This augmented assignment statement:

As the loop executes, total accumulates the sum of the elements; a variable used this way is sometimes called an accumulator.

Adding up the elements of a list is such a common operation that Python provides it as a built-in function, sum:

An operation like this that combines a sequence of elements into a single value is sometimescalled reduce.

There are several ways to delete elements from a list. If you know the index of the elementyou want, you can use pop:

If you don’t need the removed value, you can use the del operator:

If you know the element you want to remove (but not the index), you can use remove:

The return value from remove is None.

To remove more than one element, you can use del with a slice index:

As usual, the slice selects all the elements up to, but not including, the second index.

Because list is the name of a built-in function, you should avoid using it as a variable name. I also avoid l because it looks too much like 1. So that’s why I use t.

The list function breaks a string into individual letters. If you want to break a string into words, you can use the split method:

An optional argument called a delimiter specifies which characters to use as word boundaries.

The following example uses a hyphen as a delimiter:

join is the inverse of split. It takes a list of strings and concatenates the elements. join is a string method, so you have to invoke it on the delimiter and pass the list as a parameter:

'pining for the fjords'

In this case the delimiter is a space character, so join puts a space between words. To concatenate strings without spaces, you can use the empty string, '', as a delimiter.

If we execute these assignment statements:

To check whether two variables refer to the same object, you can use the is operator.

In this example, Python only created one string object, and both a and b refer to it. But when you create two lists, you get two objects:

In this case we would say that the two lists are equivalent, because they have the same elements,but not identical, because they are not the same object. If two objects are identical, they are also equivalent, but if they are equivalent, they are not necessarily identical. Until now, we have been using “object” and “value” interchangeably, but it is more precise to say that an object has a value. If you execute [1,2,3], you get a list object whose value is a sequence of integers. If another list has the same elements, we say it has the same value, but it is not the same object.

If a refers to an object and you assign b = a, then both variables refer to the same object:

The association of a variable with an object is called a reference. In this example, there are two references to the same object.

If the aliased object is mutable, changes made with one alias affect the other:

Although this behavior can be useful, it is error-prone. In general, it is safer to avoid aliasing when you are working with mutable objects.

For immutable objects like strings, aliasing is not as much of a problem. In this example:

It almost never makes a difference whether a and b refer to the same string or not.

When you pass a list to a function, the function gets a reference to the list. If the function modifies a list parameter, the caller sees the change. For example, delete_head removes the first element from a list:

Here’s how it is used:

The parameter t and the variable letters are aliases for the same object.

It is important to distinguish between operations that modify lists and operations that create new lists. For example, the append method modifies a list, but the + operator creates a new list:

This difference is important when you write functions that are supposed to modify lists.

For example, this function does not delete the head of a list:

The slice operator creates a new list and the assignment makes t refer to it, but none of that has any effect on the list that was passed as an argument.

An alternative is to write a function that creates and returns a new list. For example, tail returns all but the first element of a list:

This function leaves the original list unmodified. Here’s how it is used: