Listening and Reading - A Poison Tree

C. Answer the following questions in a sentence or two.

1. I was angry with my friend

I told my wrath ‘my wrath did end.

2. And I watered it in fears

Night and morning with my tears;

3. In the morning glad I see

My foe outstretched beneath the tree

c.      Why was the ‘foe’ found lying outstretched beneath the tree?

4. And it grew both day and night,

Till it bore an apple bright.

D. Complete the summary by filling in the given spaces with suitable words.

E. Answer the following questions in about 80-100 words

3.     Describe the effect of the poisonous fruit on the ‘enemy’. 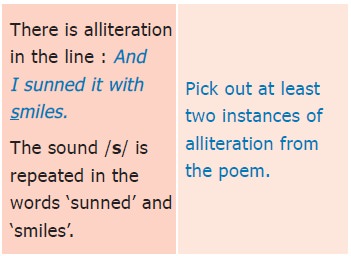 G. Read the following lines from the poem and answer the questions that follow.

2. And I watered it in fears Night and morning with my tears;

H. Listen to your teacher reading out the tips on anger management. (The script can be either read out by the teacher or student, or re-corded and played more than once as required).Listen and match the sentence parts by drawing a line. 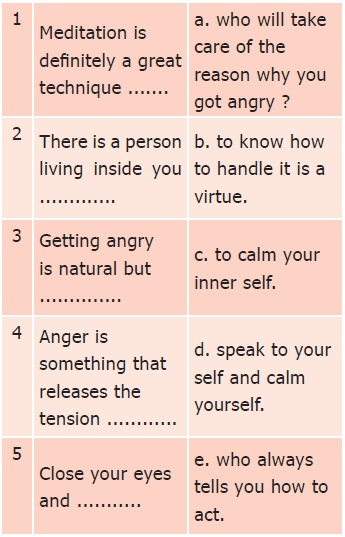 I. Answer the following in about 80-100 words. Take ideas from the poem and also use your own ideas.

1. Recall a recent situation when you became angry. What were the consequences of your anger? After listening to the guidelines on anger management, find out how well you could have handled the situation. Write your findings.

2. What might have caused the conflict which led to the poet becoming angry with his enemy? Think of one such situation that you have experienced. Describe how you felt and how the enmity grew and things became worse.

a. Identify five to six qualities which make an ordinary person, loved and respected by all. Work in groups of five or six. Each group has to take up one quality and discuss the methods for imbibing that quality and identify the challenges that need to be faced.

b. Recall an incident when you were angry with someone. How did you feel then? How did you overcome it?

c. Adolescents are often distracted by feelings like anger, disappointment and general helplessness when they face challenges at school or at home. Suggest way to turn such feelings into positive ones.

The Power of a Smile

The power of a sun can kill

And the power of foe can burn

The power of wind can chill

And the power of mind can learn

The power of anger can rage

Inside until it tears you apart

But the power of a smile

Especially yours can heal a frozen heart