While many species including mice, zebra fish, nemotodes, etc. have been transformed to lose genetic function for the study of drug discovery and disease modeling, mice have proven to be the most useful.

While many species including mice, zebra fish, nemotodes, etc. have been transformed to lose genetic function for the study of drug discovery and disease modeling, mice have proven to be the most useful. Mice are the laboratory animal species most closely related to humans in which the knockout technique can be easily performed, so they are a favorite subject for knockout experiments, While a mouse carrying an introduced transgene is called a transgenic mouse, transgenic technologies can also produce a knockout animal (mice are the most studied animal species). A knockout mouse, also called a gene knockout mouse or a gene-targeted knockout mouse, is an animal in which an endogenous gene (genomic wild-type allele) has been specifically inactivated by replacing it with a null allele (Mak et al., 2001; Lesney, 2003; Sharpless and DePinho, 2006). A null allele is a nonfunctional allele of a gene generated by either deletion of the entire gene or mutation of the gene resulting in the synthesis of an inactive protein. Recent advances in intranuclear gene targeting and embryonic stem cell technologies as described above are expanding the capabilities to produce knockout mice routinely for studying certain human genetic diseases or elucidating the function of a specific gene product.

The procedure for producing knockout mice basically involves a four-step process. A null allele (i.e., knockout allele) is incorporated into one allele of murine ES cells. Incorporation is generally quite low; approximately one cell in a million has the required gene replacement. However, the process is designed to impart neomycin and ganciclovir resistance only to those ES cells in which homologous gene integration has resulted. This facilitates the selection and propa-gation of the correctly engineered ES cells. The resulting ES cells are then injected into early mouse embryos creating chimeric mice (heterozygous for the knockout allele) containing tissues derived from both host cells and ES cells. The chimeric mice are mated to confirm that the null allele is incorporated into the germ line. The confirmed heterozygous chimeric mice are bred to homogeneity producing progeny that are homozygous knockout mice. Worldwide, three major mouse knockout programs are proceeding in colla-boration to create a mutation in each of the approxi-mately 20,000 protein-coding genes in the mouse genome using a combination of gene trapping and gene targeting in mouse embryonic stem (ES) cells (Staff, 2007). These include: (1) KOMP (KnockOut Mouse Project, http://www.knockout-mouse.org), funded by the NIH; (2) EUCOMM (EUropean COnditional Mouse Mutagenesis examining the role of each gene in normal physiology and development, and shed light on the pathogenesis of abnormal physiology and disease. RNA silencing and interference techniques (siRNA and RNAi) are impacting knockout mice production and are discussed.

Extensive previous research has generated and the continuing discoveries of the three worldwide mouse knockout consortia will further create better models of human monogenic and polygenic diseases such as cancer, diabetes, obesity, cardiovascular disease, and psychiatric and neurodegenerative dis-eases. For example, knockout mice have been en-gineered that have extremely elevated cholesterol levels while being maintained on normal chow diets due to their inability to produce apolipoprotein E (apoprotein E) (Zhang et al., 1992; Breslow, 1994). Apoprotein E is the major lipoprotein component of very low-density lipoprotein (VLDL) responsible for liver clearance of VLDL. These engineered mice are being examined as animal models of atherosclerosis useful in cardiovascular drug discovery and develop-ment. Table 4 provides a list of some additional selected examples of knockout mouse disease models.

Engineered animal models are proving invalu-able to pharmaceutical research since small animal models of disease may be created and validated to mimic a disease in human patients. Mouse, rat, and Zebrafish are the most common models explored and used. Genetic engineering can predispose an animal to a particular disease under scrutiny and the insertion of human genes into the animal can initiate the development of a more clinically relevant disease condition. In human clinical studies, assessments of efficacy and safety often rely on measured effects for surrogate biomarkers and adverse event reporting. Validated transgenic animal models of human disease allow for parallel study and possible predictability prior to entering clinical trials. Also, it is possible to screen potential drug candidates in vivo against a 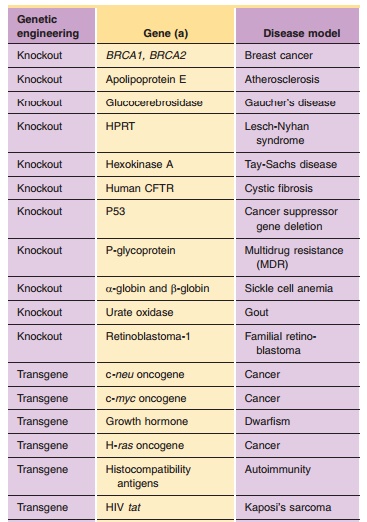 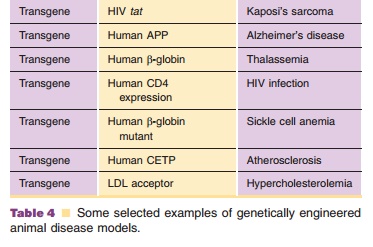 human receptor target inserted into an animal model. The number of examples of transgenic animal models of human disease useful in drug discovery and development efforts is growing rapidly (Sharpless and DePinho, 2006; Schultz et al., 2007). Such models have potential to increase the efficiency and decrease the cost of drug discovery and development by reducing the time it takes to move a medicinal agent from discovery into clinical trials. Table 4 provides a list of some selected examples of genetically engi-neered animal models of human.