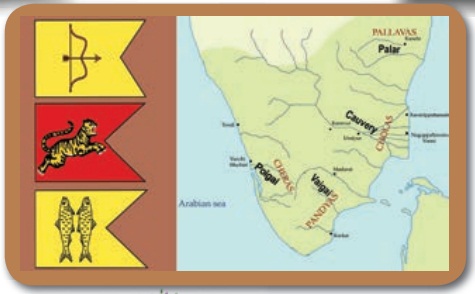 ● To know about Tamil Kingdoms of Sangam age.

● To know about Cheras, Cholas and Pandyas.

● To understand the administrative, economic and social conditions during Sangam period.

● To know about Kuru Nila Mannargal.

“The owner of a Scepter without bent is the Chera king!

The wealth of Rice bowl of Thanjavur is the Chola King!

The Pearl of breath taking Muthamizh is the Pandiya King!

The Chariot of cave temples is the Pallava King!

You are the gold of Tamil Nadu and Lions of Tamil Soil.”

In the ancient period, people settled and started living along the river banks..

They produced agricultural crops. They reared cattle in the pasture lands. In this way the kingdoms of early Chera, Chola, Pandya and other kingdoms emerged along the rivers.

Cheras were the forerunners of the ‘Moovendargal‛ who ruled on the banks of river Poigai and their capital city was Vanji.

The major part of the Cheranadu was surrounded by high mountains. The greatest rulers among the kings of Cheranadu were Imayavaramban Neduncheralathan and his son Senguttuvan.

The able ruler Cheran Senguttuvan, the son of Neduncheralathan erected the statue of Kannagi. This temple of Kannagi was built by the stones brought from the Himalayas after defeating king Kanaka Vijaya. It is also said that these stones were brought to Cheranadu on the heads of the captive soldiers.

This can be understood from the epic Silappathikaram written by Senguttuvan's brother Ilangovadigal. "Pathitru paththu" helps to know about the Chera kings during Sangam period.

● Who were the greatest kings of early Cheras?

● Name the epic wrote by Ilangovadigal

The early Cholas kept Uraiyur as their capital along the river Cauvery and ruled it. Uruthirangkannanar of Kadiyalur in his Pattinappalai describes that Cholanadu is famous for rice (Cholanadu Sorudaithu).

The land of Cholas was fertile due to the river Cauvery. The kings ruled by providing justice to their subjects. The greatest ruler among the Cholas was Karikala Cholan who was also called 'Karikal Peruvalathan'.

Karikala Cholan took the responsibility of a king at a very early age and ruled efﬁciently. When he was very young, he was captured by his enemies and imprisoned. The room in which he was arrested was set on ﬁre. In this fire accident, his feet burnt. Due to his charred leg, he was called as 'Karikalan'. 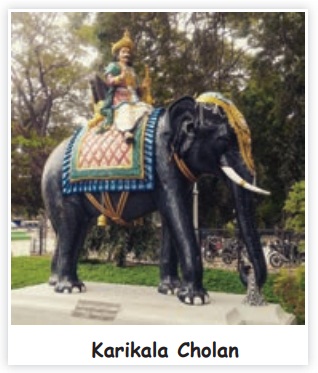 At a very young age he disguised as an old man and tactfully justiﬁed a case.

The Cheras and Pandyas together attacked Karikalan at Venni, Vahaipparanthalai. Finally Karikala Cholan defeated the two rulers there and was victorious. He invaded Srilanka and brought the captives from there, to build the dam Kallanai across the river Cauvery. The dam still stands erected even after 2000 years of its construction.

● Kallanai was constructed by the Chola king Karikalan in the 2nd century B.C.(B.C.E.). This is said to be the world's oldest dam still in use. Stones and Lime mortar were used to construct it.

● Who was the greatest Chola king of the ancient period?

Karikal Peruvalathan was the greatest Chola king of the ancient period.

● Name the capital and port of the Cholas.

Uraiyur was the capital of the Cholas and Cauvery Poompattinam was their port.

Pandyas established their rule on the bank of Vaigai with Madurai as their capital. The ancient Pandya country comprised of Madurai, Theni, Dindigul, Virudunagar, Tirunelveli, Tuticorin, Sivagangai and Ramanathapuram districts. 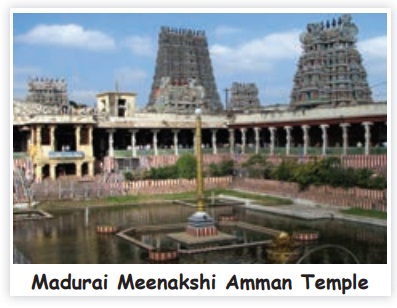 Madurai remained as the most popular city of Sangam period. Pandiya country famous for pearls. Muthamizh sangams were held in madurai under the patronage of pandayas. The third Tamil Sangam was held in Madurai. Muthamizh ﬂourished during the reign of Pandyas. The most famous kings were Thalaiyalanganathu Seruvendra Pandiya Nedunchezhian and Pandiya Nedunchezhian of Silapathikaram.

During the rule of Pandiya Nedunchezhian, he happened to prosecute Kovalan for theft and gave death sentence. Kovalan‛s wife Kannagi advocated to prove her husband‛s innocence. 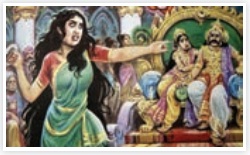 When the king realized the truth,he said “Yano Arasan, Yanae kalvan”... "Kedugaven ayul"and died by falling down from his throne. Immediately his wife Kopperumdevi also sacriﬁced her life out of shock. The administrative system of the Pandyas was depicted by Mangudi Maruthanar of 'Madurai Kanchi'.

● Which Pandya mannan was mentioned in Silappathikaram?

● What is inscribed on the ﬂag of Pandyas?

Fish is inscribed on the flag of the Pandyas.

List out the territories of the Moovendargal in the present districts of Tamil Nadu.

The early Pallavas ruled on the banks of river Palar with Kancheepuram as theircapital. The regions ruled by them was called Thondai mandalam. It is located in theNorth Eastern part of Tamil Nadu.

The later Pallava period was started from the reign of Simhavishnu. The greatest kings of this period were Mahendravarman and Narasimhavarman. The greatest achievements of the Pallavas were Cave temples and Mondithic rathas.

● Which was the capital of Pallavas?

Kancheepuram was the capital of Pallavas.

● Where is Thondai mandalam in Tamil Nadu.

Thondai Mandalam is located in the North Eastern part of Tamil Nadu. 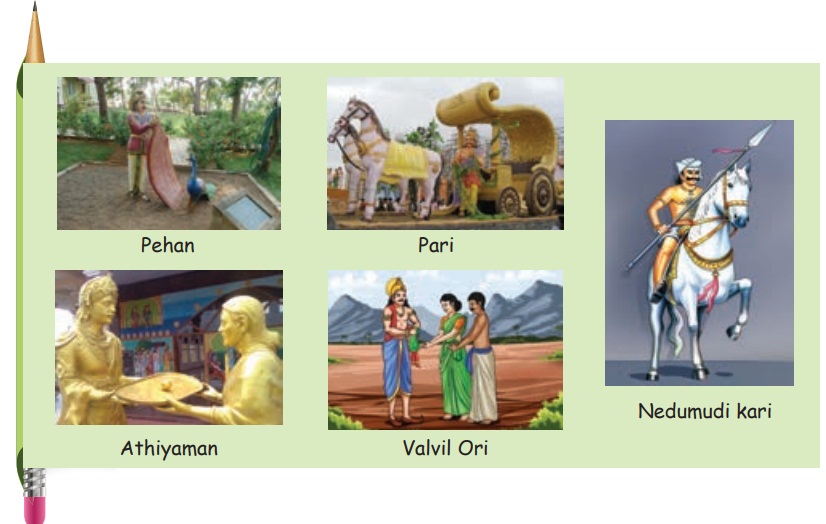 These kings were known for their generosity. Therefore they were popularly called as "Kadai ezhu vallalgal".

● Who offered gooseberry to the poetess Avvai?

● Who put his shawl around the peacock?

Pehan put his shawl around the peacock.

Arasan was specially called as Ko, Kon, Venthan, Kotravan, Irai by his people.

Each dynasty had their own ﬂag, symbol, scepter, sword, drum and venkotrakudai.

The kings were not only efﬁcient warriors but they were scholars too. Kingship became hereditary. The ﬁrst son became the ruler. The kings greatly cared for the people of their country. 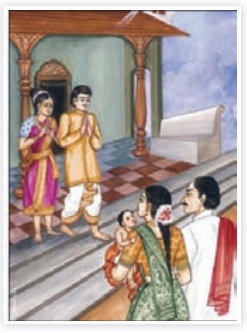 Hospitality occupied a signiﬁcant place in Sangam period. Even though it is Amritam (Nectar) it was considered to be a sin, if the guest is kept outside home.

Kakkai Padiniyar, a poet got his name for praising a crow for informing the arrival of a guest. Pura Nanooru describes hospitality as one of the important duties of the Tamils.

Various arts and crafts ﬂourished during the Sangam age. People lived happily due to the development in economy.

Paddy and Sugarcane were the most important crops cultivated. Besides these Varagu (Millets), Thinai (Millets) and Samai were also cultivated.

From the above, poetess Avvai tries to convey that the prosperity of the king lies in the development of agriculture.

This signiﬁes the importance of agriculture in the Sangam Period.

Women were respected in the society. Monogamy was prevalent. Women were equal to men in bravery. It is said in 'Pura Nanooru' that in the ﬁrst day of battle a woman lost her father, the second day she lost her husband, despite of these heavy loses she prepared and sent her son to the battle-ﬁeld with great zeal.

It is also said, a woman in the Sangam age drove away a ferocious tiger with Muram (Winnow) in her hand. 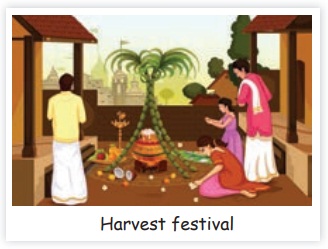 People of Sangam Age celebrated various festivals. Karthikai, Thiruvaadhirai and Harvest festivals were the most celebrated ones.

List out the festivals of Tamil people at present.