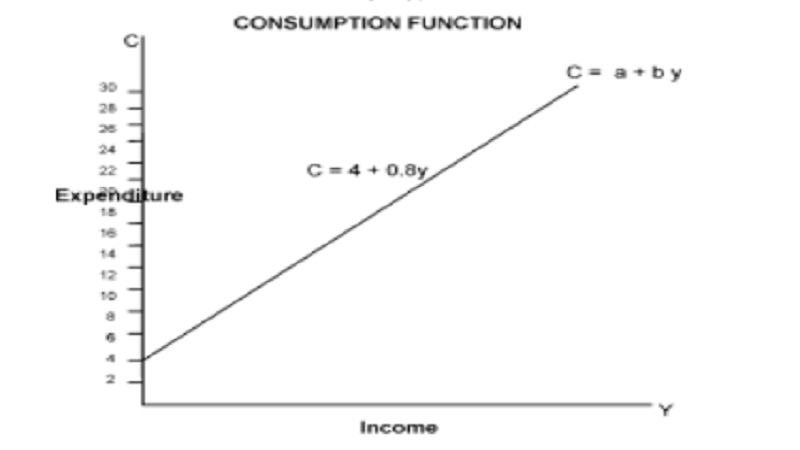 People spend most of their income on commodities. Some spend their income fully and some others spend a portion and keep the rest for saving.

People spend most of their income on commodities. Some spend their income fully and some others spend a portion and keep the rest for saving. How much the community as a whole spends and saves? It is about the relationship between income and consumption.

The term 'consumption function' explains the relationship between income and consumption. A function is the link between two or more variables. The proportion of income spent on actual consumption at different levels of income is called propensity to consume.

Thus a consumption function is generally described in terms of the linear equation Y = a + bY where the constant 'a' is the amount of autonomous consumption and slope (b) is MPC. The rate of change in consumption due to change in income depends on the MPC.

measured by dividing the vertical change by horizontal change. The symbol � represents a change. Or slope can also be calculated as

The propensity to consume is assumed to be stable in the short run. Therefore out of the given income how much will be spent depends on the slope of the curve.

1.        Increase in income and increase in consumption are not at the same proportion. Consumption function is positive but less than one.

2.        An increase in income is shared between consumption and saving.

The portion of the income not spent on consumption is saving. Saving is consumption forgone. If saving rises, consumption will fall. According to Keynes, the level of saving in the economy, like consumption, depends basically on income. The relationship between saving and income can mathematically be expressed as in equation ( 3) and that is called as saving function.

With an increase income, if MPC tends to fall, MPS will tend to rise. If MPC remains constant, MPS also will remain constant. Thus income consists of consumption and saving.

Other Determinants of Consumption

Though income is the most important factor that has greater influence on consumption, there are other factors which influence the propensity to consume. They are: