Just-in-time (JIT) production systems were developed in Japan to minimize inventories, especial 1)' WlP. WIP and other types of inventory are seen by the Japanese as waste that should be minimized or eliminated, The ideal just-in-time production system produces and delivers exactly the required number of each component to the downstream operation in the manufacturing sequence just at the time when that component is needed. Each component is delivered "just in time." This delivery discipline minimizes WIP and manufacturing lead time as well as the space and money invested in WIP, The JIT discipline can be applied not only to production operations but to supplier delivery operations as well

Whereas the development of lIT production systems is largely credited to the Japanese, the philosophy of JIT has been adopted by many U.S. manufacturing firms. Other terms have sometimes been applied to the American practice of lIT to suggest differences with the Japanese practice. For example, continuous flow manufacturing is a widely used term in the United States that denotes a lIT style of production operations. Prior to lIT, the traditional U.S. practice might be described as a just In case" philosophy. that is, to hold large in process inventories to cope with production problems such as late deliveries of components, machine          breakdowns. Defective components, and wildcat  strikes,

The JIT production discipline has shown itself to be very effective in high volume repetitive operations, such as those found in the automotive industry (6J, The potential for wrp accumulation in this type of manufacturing is significant due to the large quantities of products made and the large numbers of components per product.

The principal objective of JIT is to reduce inventories, However, inventory reduction cannot simply be mandated to happen. Certain requisites must be in place for a JlT production system to operate successfully. They are: (I) a pull system of production control, (2) small batch sizes and reduced setup times, and (3) stable and reliable production operations. We discuss these requisites in the following sections.

JIT is based on a pull system of production control, in which the order to make and deliver parts at each workstation in th", production sequence comes from the downstream station that uses those parts. When the supply of parts at a given workstation is about to be exhausted. that station orders the upstream station to replenish the supply. Only on receipt of this order is the upstream station authorized to produce the needed parts. When this procedure is repeated at each workstation throughout the plant, it has the effect of pulling parts through the production system. By comparison, in a push system of production control, parts at each workstation are produced irrespective of the immediate need for the parts at its respective downstream station. In effect, this production discipline pushes parts through the plant. The risk in a push system is that more work gets scheduled in the factory than it can handle, resulting in large queues of parts in front of machines. The machines are unable to keep up with arriving work. and the factory becomes overloaded. A poorly planned MRP based production planning system that does not include capacity planning runs this risk.

One way to implement a pull system is to use kanbans, The word kanban (pronounced kahn-bahn ) means "card" in Japanese, The Kanban system of production control, developed and made famous by Toyota, the Japanese automobile company, is based on the use of cards that authorize (1) parts production and (2) parts delivery in the plant. Thus, there are two types of kanbans: (1) production kanuans and (2) transport kanbans. A production kanban (P-kanban) authorizes the upstream station to produce a batch of parts. As they are produced. the parts are placed in containers. so the batch quantity is just sufficient to fill the container. Production of more than this quantity of parts is not allowed in the kauban system. A transport kanbon (T-kanban) authorizes transport of the container of parts to the downstream station.

As mentioned, stations i and i + 1 are only two sequential stations in a longer sequence, All other pairs of sequential stations operate according to the same kanban pull system. This production control system avoids unnecessary paperwork. The kanban cards are used over and over again instead of generating new production and transport orders every cycle. Although considerable labor is involved in material handling (moving cards and containers between stations), this is claimed to promote teamwork and cooperation among workers.

To minimize WIP inventories in manufacturing, batch size and setup time must be minimized. The relationship between batch size and setup time is given by the EOQ formula, Eq. (2fi 5). In our mathematical model for total inventory cost, Eq. (26.1). from which the EOQ formula is derived, average inventory level is equal to one half the batch size. To reduce average inventory level, batch size must be reduced. And to reduce batch size, setup cost must be reduced. This means reducing setup times. Reduced setup times permit smaller batches and lower WIP levels. Methods for reducing setup time were pioneered by the Japa?ese during the 1960s and 1970s. U.S. manufacturing firms have also adopted setup reduction methods. Results of the efforts are sometimes dramatic. Examples of setup reductions in Japanese and U.S. industries are reported by Suzaki, and we present some of these in Table 26.1.

Setup time reductions result from a number of basic approaches that are best described as industrial engineering methods improvements. These approaches include (sourcc,:)· 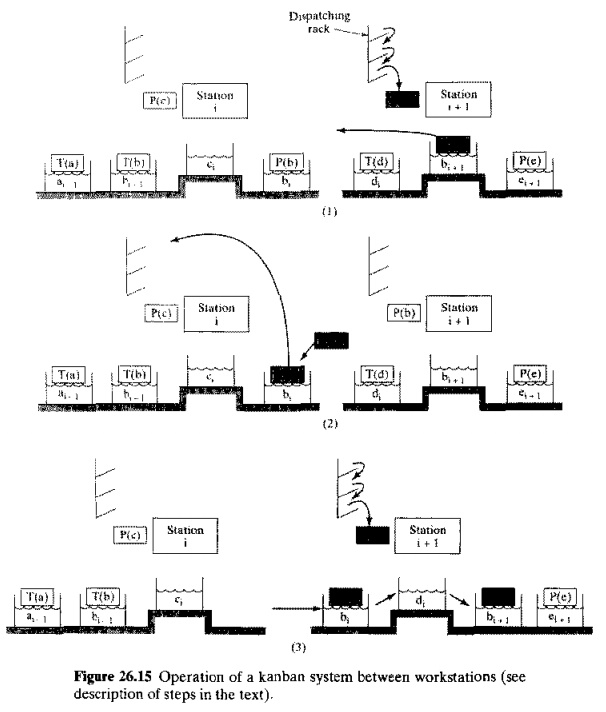 Figure 26.15 Operation of a kanban system between workstations (see description of steps in the text)

Separate  the work elements  that comprise  the setup  procedure  into two categories:

internal  elements,  those  that  must  be done  during  the machine  stoppage,  and

external  dements,   those  that can be done  while the previous  job is still running.

Design the setup tooling [e.g., die, fixture, mold) and plan the setup method to permit as much of the changeover procedure as possible to consist of external work elements.

Use time and motion  study to reduce  the internal work elements  to the fewest possible.

Use quickacting  clamping  devices  instead  of bolts and nuts.

Develop  permanent   solutions  for problems  that cause  delays  in the setup.

Schedule batches of similar part styles in sequence to minimize the magnitude of changes required in the setup.

Use group technology and cellular manufacturing it possible so that similar part styles are produced on the same equipment.

Design modular fixtures consisting of a base unit plus insert tooling that can be quickly changed for each new part style. 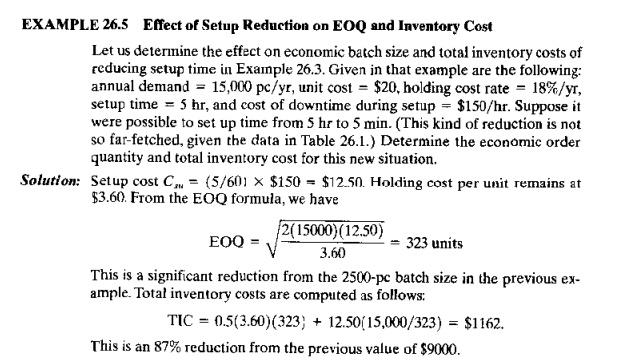 Other requirements for a successful JIT production systems include: (1) stable production schedules, (2) on-time delivery, (3) defect-free components and materials, (4) reliable production equipment. (5) a workforce that is capable, committed, and cooperative, and (6) a dependable supplier base.

Stable Schedule. Production must flow as smoothly as possible, which means minimum perturbations from the fixed schedule. Perturbations in downstream operations tend to be magnified in upstream operations. A 100/,change in final assembly may translate into a 50Ll:. change in parts production operations due to overtime, unscheduled setups, variations from normal work procedures. and other exceptions, By maintaining a constant MPSS over time, smooth work flow is achieved. and disturbances in production arc minimized.

On Time Delivery, Zero Defects, and Reliable Equipment. Just-in-time production requires near perfection in on-time delivery, parts quality, and equipment reliability, Because of the small lot sizes used in JIT. parts must be delivered before stock-outs occur at downstream stations. Otherwise. these stations are starved for work. and production must be stopped

JIT requires high quality in every aspect of production. If defective parts are produced. they cannot be used in subsequent processing or assembly stations, thus interrupting work at those stations and possibly stopping production. Such a severe penalty forces a discipline of very high quality levels (zero defects) in parts fabrication. Workers are trained to inspect their own output to make sure it is right before it goes to the next operation. In effect. this means controlling quality during production rather than relying on in specters to discover the defects later. The Japanese use the word Jidoka in their quality control procedures. Roughly translated, it means "stop everything when something goes wrong"

JIT also requires highly reliable production equipment. Low WIP leaves little room for equipment stoppages. Machine breakdowns cannot be tolerated in a JIT production system. The equipment must he "designed for reliability." and the plant that operates the equipment must have a well-planned preventive maintenance program.

Workforce and Supplier Base. Workers in a JIT production system must be cooperative. committed, and cross-trained. Small batch sizes means that workers must be willing and able to perform a variety of tasks and to produce a variety of pan styles at their workstations. As indicated above, they must be inspectors as well as production workers to ensure the quality of their own output. They must be able to deal with minor technical problem, that may be experienced with the production equipment so that major breakdowns are avoided.

The suppliers of raw materials and components to the company must be held to the same standards of ontime delivery, zero defects, and other JIT requirements as the company itself. New policies in dealing with vendors are required for JlT. These polices include: (I) reducing the total number of suppliers, thus allowing the remaining suppliers to do more business: (2) entering into long term agreements and partnerships with suppliers. so that suppliers do not have to worry about competitively bidding for every order;

(3) establishing quality and delivery standards and selecting suppliers on the basis of their capacity to meet these standards; (4) placing employees into supplier plants to help those suppliers develop their own JIT systems; and (5) selecting parts suppliers that are located near the company's final assembly plant to reduce transportation and delivery problems.