In our day to day activity we see many leaves of plants, blades, wings of butterflies etc.

In our day to day activity we see many leaves of plants, blades, wings of butterflies etc.

The figures which can be divided into two parts of equal shape and size are called symmetrical figures.

The two halves of the figures are the mirror images of each other.

• Draw the mirror symmetry using the other half. 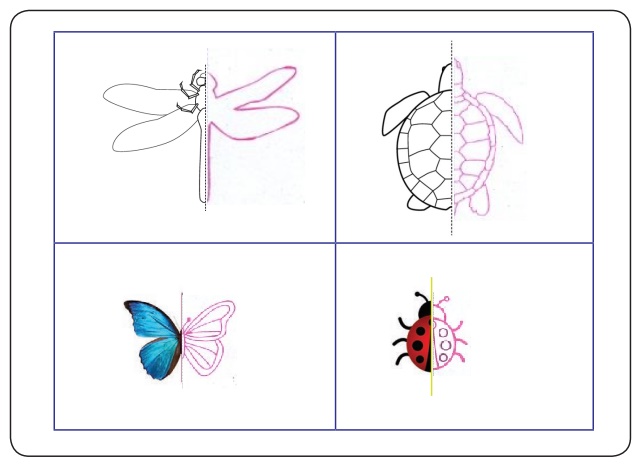 The line which divides a figure into two equal halves is called the line of symmetry.

A square has four lines of symmetry

A rectangle has two lines of symmetry.

A circle has infinite

An equilateral triangle has three lines of symmetry

Find out the symmetrical figure and colour it:

• Take a piece of paper. Fold it exactly into half. Now take the folded edge and fold it into itself. Cut from one folded edge to the other folded edge. Open the paper and get a symmetrical figure.

Let us understand the concept of symmetry by paper folding:

• Take a white sheet of paper and fold it once such that it is divided into two equal parts.

• Mark any two points say A and B on the folded line. As shown in figure.

• Draw a closed figure on the folded paper beginning at a point and ending at the other point.

• Cut the closed figure along the dotted lines marked.

• Unfold the paper. The half shapes on the either side of the line of fold AB are exactly the same. 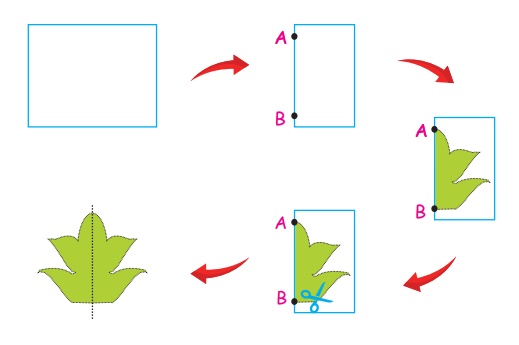 2. Able to draw top view, front view and side view of simple objects.

3. To observe from the surroundings and from day to day life situations and identify symmetrical objects.

Check whether the following pictures are symmetrical or not symmetrical

4. Collects record symmetrical objects whenever / wherever they see.

• Observe the objects around you at home. List the name and shape of the objects. Above these objects which can be called as symmetrical.

5. To draw such symmetrical objects and naming the same.