A developed country is a sovereign state that has a highly developed economy and advanced technological infrastructure relative to other less industrialised nations.

A developed country is a sovereign state that has a highly developed economy and advanced technological infrastructure relative to other less industrialised nations. 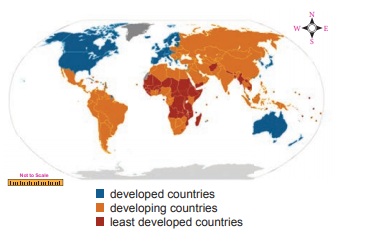 India has been balancing the superpowers with great care and had been trying to reap the maximum benefit for its domestic development.

India and the United States of America has signed a Communications Compatibility and Security Agreement (COMCASA) that will lead to a new generation of bilateral military partnership. It is valid for a period of 10 years. COMCASA gives India access to advanced communication technology used in U.S. defence equipment and allows real-time information sharing between the militaries of the two countries.

There has been a significant progress in all areas particularly the growing cooperation and exchanges include defence, counter-terrorism, nuclear energy and space. French space launch pads are used by ISRO. India and France are cooperating on developing smart cities Chandigarh, Nagpur and Puducherry. India and France launched the International Solar Alliance, which brings together countries between Tropic of Cancer and Tropic of Capricorn for cooperation on solar energy.

India and Australia have built strategic trust over the years slowly yet steadily. Australia and India are committed to working together to enhance maritime co-operation with India’s bilateral naval exercise (AUSINDEX).

India decided to introduce the Japan’s Shinkansen system. It is a highest class of high- speed railway system with safety and accuracy. Delhi Metro is one of the most successful examples of Japanese co-operation. Mumbai– Ahmedabad High Speed Railway (MAHSR) is another area of co-operation. The Government of Japan has offered 20 seats per year to Indian nationals for a master’s degree course in the University of Japan for serving the Indian Railways.

In the manufacturing sector Japan announced its co-operation of training 30,000 Indian people in the Japan India Institute of Manufacturing (JIM) providing Japanese style manufacturing skills to enhance India’s manufacturing industry base and contribute to ‘Make in India’ and ‘Skill India’ initiatives.

In 2017, the first four JIMs were started in the states of Gujarat, Karnataka, Rajasthan and Tamil Nadu and JEC (two Japanese Endowed Courses in engineering colleges) was established in Andhra Pradesh.

Recent initiatives include the establishment of three India-Japan Joint Laboratories in the area of information and communication technology (Internet of Things, Artificial Intelligence and Big Data Analytics).