He stood on the grass verge by the side of the road and looked over the garden wall at the old house. It hadn’t changed much.

Read the story given below. Find out why the narrator feels that he can’t climb.

He stood on the grass verge by the side of the road and looked over the garden wall at the old house. It hadn’t changed much. The old house built with solid blocks of granite wasn’t altered at all. But there was a new outhouse, and there were fewer trees. He was glad to see that the jackfruit tree still stood at the side of the building casting its shade on the wall. He remembered his grandmother saying:

‘A blessing rests on the house where the shadow of a tree falls.’ And so the present owners must also be receiving the tree’s blessings. At the spot where he stood there had once been a turnstile, and as a boy he would swing on it, going round and round until he was quite dizzy. Now the turnstile was gone, the opening walled up. Tall hollyhocks grew on the other side of the wall.

‘What are you looking at?’

It was a disembodied voice at first. Moments later a girl stood framed between dark red hollyhocks staring at the man. She was only twelve or thirteen, with lively eyes and long black hair.

'Well, he should have been a brigadier by now.'

The man burst out laughing.

'It's not funny,' she said. 'Even Mommy says he should been a brigadier.'

It was on the tip of his tongue to make a witty remark (‘Perhaps that’s why he’s still a Colonel’), but he did not want to give offence. They stood on either side of the wall, appraising each other.

'Well' she said,'If you don’t want to buy the house, what are you looking at?’

‘I used to live here twenty-five years ago. As a boy. As a young man.... And then my grandmother died, and we sold the house and went away.’

She was silent for a while, taking in this information. Then she said, ‘And you’d like to buy it back now, but you don’t have the money?’ He did not look very prosperous.

‘No, I wasn’t thinking of buying it back, wanted to see it again, that’s all. How long have you lived in it?’

‘Only three years,’ she smiled.

‘Would you like to come in and look more closely?’

‘They’ve gone to the club.’ They won’t mind.

‘Even elderly friends like me?’ ‘How old are you?’

‘Oh, just middle aged, but feeling young today.’ And to prove it he decided he’d climb over the wall instead of going round to the gate. He got up on the wall all right, but had to rest there, breathing heavily.

‘Middle-aged man on the flying trapeze,’ he muttered to himself.

He slithered down into a flower-bed, shattering the stem of a hollyhock.

As they walked across the grass he spotted a stone bench under a mango tree. It was the bench on which his grandmother used to rest, when she was tired of pruning rose bushes and bougainvillea. ‘Let’s just sit here,’ he said. ‘I don’t want to go inside.’

She sat beside him on the bench.

They were silent for some time. The man closed his eyes and remembered other times - the music of a piano, the chiming of a grandfather clock, the constant twitter of budgerigars on the veranda, his grandfather cranking up the old car….. 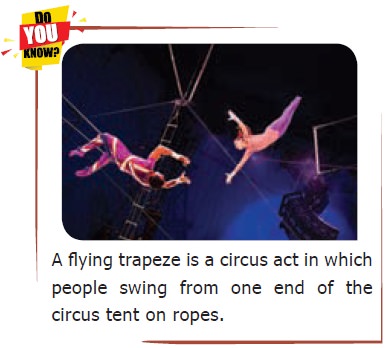 ‘I used to climb the jackfruit tree,’ he said, opening his eyes.

‘Do you want to climb it again? My parents won’t mind.’

‘No, no. Not after climbing the garden wall. Let’s just sit here for a few min-utes and talk. I mention the jackfruit tree because it was my favourite place. Do you see that thick branch stretching out over the roof ? Half way along it there’s a small hollow in which I used to keep some of my treasures.’ ‘What kind of treasures?’

‘Oh, nothing very valuable. Marbles I’d won. A book I wasn’t supposed to read. A few old coins I’d collected. Things came and went. I was a bit of a crow, you know, collecting bright things and putting them away. There was my grandfather’s Iron Cross. Well, not my grandfather’s exactly, because he was British and the Iron Cross’ was a German decoration awarded for bravery during the War - the First World War when my grandfather fought in France. He got it from a German soldier.’ 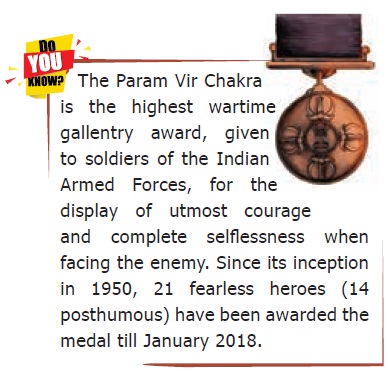 ‘No’, he said, looking her in the eyes. ‘I left it in the jackfruit tree.’

‘Yes, I was so excited at the time, packing and saying goodbye to people and thinking about the ship I was going to sail on that I simply forgot all about it.’

‘Yes’, he said. ‘It’s twenty-five years, but it may still be there. Unless someone else found it….’

‘Would you like to go and look?’ ‘I can’t climb trees any more.’

And now, barefoot, she ran breathlessly towards him, in her outstretched hand a rusty old medal.

He took it from her and turned it over on his palm.

‘Is it the Iron Cross?’ she asked eagerly.

‘Now I know why you came. You wanted to see if it was still in the tree.’

‘You may be right. I’m not really sure why I came. But you can keep the Cross. You found it, after all.’

1. How did the narrator get the iron cross?

2. Do you think the girl kept the iron cross?

‘But it could have remained in the tree for another twenty-five years if you hadn’t climbed up to look for it.’

‘On the right day, at the right time, and with the right person’, he said, getting up and placing the medal in her hands. ‘It wasn’t the Cross I came for. It was my youth.’

She didn’t understand that, but she walked with him to the gate, Where the road turned, he looked back and waved to her. Then he quickened his steps and moved briskly towards the bus stop. There was sprightliness in his step, and something cried aloud in his heart.

20.The mango scented summer breeze made the blood course in his veins, and he forgot, for a moment, that he couldn’t climb trees any more….

Ruskin Bond was born on 19th May 1934. He is an award winning Indian author of British descent. He is much renowned for his role in promoting children’s literature in India. The Indian council for Child Education has recognized his role in the growth of children’s literature in India. He got the Sahitya Akademi Award in 1992 for 'Our trees still grow in Dehra'. He was awarded the Padmashri in 1999 and Padma Bhushan in 2014. As a prolifi c writer, he has written over 500 short stories, essays and novels. His popular novel 'The Blue Umbrella' was made into a Hindi fi lm and was awarded the National Film Award for the best children’s fi lm in 2007.