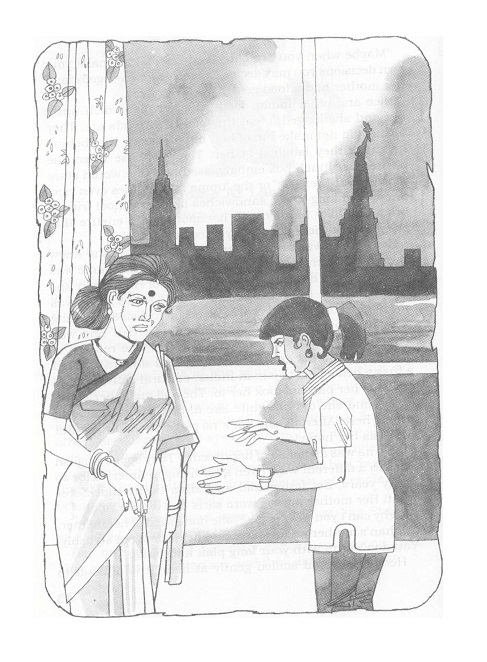 I am supposed to be going home,' thought Aparna to herself. 'But why do I feel that I have left home behind?' She and her parents had visited India after twelve years. It was Aparna's first trip to the country of her origin. Financial constraints and visa problems had prevented her parents from visiting the country of their birth for so long. Finally, they had planned the trip and now they were on their way back.

Aparna   was   mortified   when   her   mother   attended   the Parent-Teacher meetings  or when her father participated  in the workshops with her.  They both just stood out!  They were not like  the  other parents who  belonged!  She was  ashamed of  her  feelings  about  her  parents.

Her  father's  laughter  and  loud  voice  boomed  at  home  in these  surroundings!  He  was  in  his  element  here  and  how much her uncles and cousins looked up to him.  They almost revered  him,  she  thought!

This  was  their  home!  Here  they were  in  their  environment and  they  shone  like  bright  stars!  They were  'at home' here! And  then,  she  understood  how  difficult  it  must  have  been for  them  to  adjust  and  settle  down  in  America.  Especially when they were so different and had a different culture and different set of values.  Yet,  they had never stopped her from doing what  she  wanted  to  and  had  never  forced  her  to  feel that  she was  different!  They had never tried to  force her to do  what  she  did  not  want  to,  and  though  they  must  have been hurt at her  attitude  and rebellion  to  anything Indian, yet they had  never taken  it  out  on  her.

Aparna  smiled  at  her  in  reply.  She  was  determined  that she would  also  be as  Indian as her parents.  And  she would learn to  read  and write her mother tongue  and  actively take part   in   all   the   Indian   cultural   activities   which   she   had shunned for  so long!  It should not be too  difficult to fit into two  cultures!  Had  her  parents  not  done  so?  And  satisfied she  settled  down  for  a  snooze.