A connector may be used to indicate the relationship between the ideas expressed in a clause or a sentence.

* We could go to the library or the park.

* He neither finished his homework nor studied for the test.

* I did not go out because the weather was hot.

In each of the above sentences, two different ideas are expressed in one sentence.To connect the ideas, some words like or, neither…nor, because are used. These words and phrases are called Connectors.

A connector may be used to indicate the relationship between the ideas expressed in a clause or a sentence.

The following connectors can be used for different purposes.

Look at the following sentences, how connectors are used. 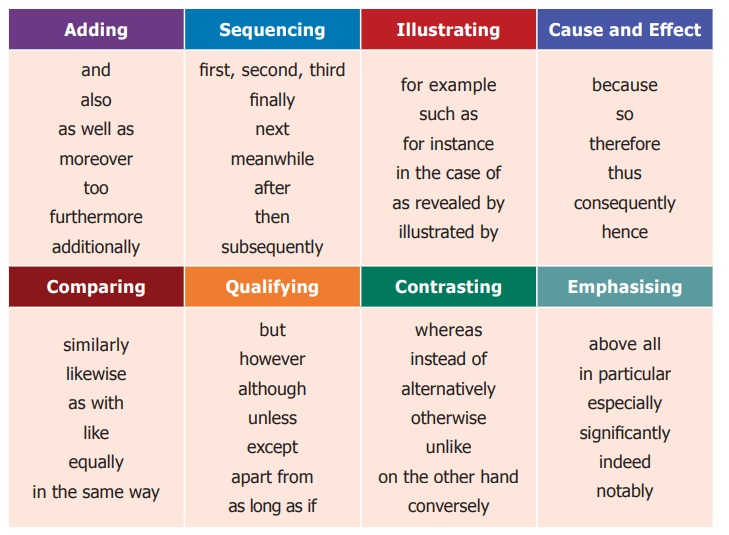 * The man has much money. However, he isn’t happy at all.

* I like playing football. On the other hand, my brother likes playing basketball.

* His family made a lot of effort to make their son’s lessons better, conversely, he never made any effort.

* She spent four years studying for her law degree. Meanwhile, she continued to work at the bank.

* You are not allowed to use your phone here. Similarly, you have to switch it off when you are in the library.

A. Complete the following sentences using appropriate Connectors from the box.

moreover, although, meanwhile, therefore, because, as long as, thus, above all, for instance, except

1. Irine felt cold although she was wearing a winter coat.

2. This restaurant has some of the best chefs in the town. moreover their service is excellent.

3. I’m not going to the party tonight because I didn’t get an invitation.

4. You can set the table. meanwhile, I’ll start making dinner.

5. I can play quite a few instruments. for instance, the flute, the guitar and the piano.

6. The store was out of chocolate chips; therefore they would need to make a different type of cookies.

7. The stores are open daily except Sundays.

9. This detergent is highly concentrated and thus you will need to dilute it.

10. It was the thing he prized above all.

Read the following sentences and analyse the difference.

The team leader presented the report.

The report was presented by the team leader.

* In the first sentence, the verb shows that the subject is the doer of the action.

Therefore, the sentence is in active voice.

* In the second sentence, the verb shows that the subject is not the doer of the action. Therefore, the sentence is in passive voice.

We use the Passive voice when -

*the focus is on the action rather than the doer of the action.

(e.g.)About 50 per cent of the graduates are employed in IT related sectors.

*we do not know who the doer is.

*we talk of a system or a process.

(e.g.)The vegetables are washed well. Then, they are cut into cubes.

* we write newspaper headlines and notices at public places. (‘be’ verb is omitted as the language has to be concise)

*we describe changes that have taken place.

(e.g.) Our school looks completely different. The whole place has been painted.

Look at the below table. It shows the changes in tense while changing sentences from active voice into passive voice.

B. Convert the following active sentences into passive sentences by supplying an appropriate passive verb form.

a. will not recognize

b. will not being recognized

c. will not be recognized

b. wasn't being invited

b. has been won

c. had been won

c. is being repaired

c. is being spoken

b. had been shocked

a. has already been sent

b. had already been sent

a. am worrying by

b. am worried by

c. have worried by

2. Mother made a cake yesterday. : A cake was made by mother yesterday.

3. Have you finished the report? : Has the report been finished by you?

4. The tiger was chasing the deer. : The deer was being chased by the tiger.

5. She has written a novel. : A novel has been written by her.

Let + object + be + past participle. (Positive)

Let the window be opened. (Passive) 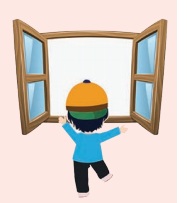 (e.g) Do not pluck the flowers. (Active)

Let the flowers not be plucked. (Passive)

Look at these imperatives in passive and compare. 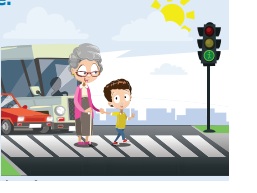 Passive: You are requested to help me.

Passive: You are warned not to touch it.

(Note:  We can begin the passive sentence with you if we want to put emphasis on the person addressed to.)

1. Stanley will inform you later. Answer: You will be informed by Stanley later.

6. Carry it home. Answer: Let it be carried home.

7. They are decorating the wall. Answer: The wall is being decorated by them.