Comparison can be made using the three forms of an adjective.

Adjective is a word that describes or qualifies a noun. It gives more information about a noun.

eg. The tiger is a strong animal. Meena is a girl.

eg. Kumar is a kind man.

eg. A tsunami is more destructive than a cyclone.

eg. Mount Everest is the highest peak in the world.

The Positive Degree is used to express or describe a quality.

The Positive Degree of an adjective states the characteristic of the noun.

The Comparative Degree is used when two things (or two sets of things) are compared.

·        This building is taller than any other building.

The Superlative Degree is used when more than two things are compared.

A. Work with a partner and fill in the table with information about your locality. You may add more information, if necessary. When you finish filling the table, write a short paragraph comparing the two places. 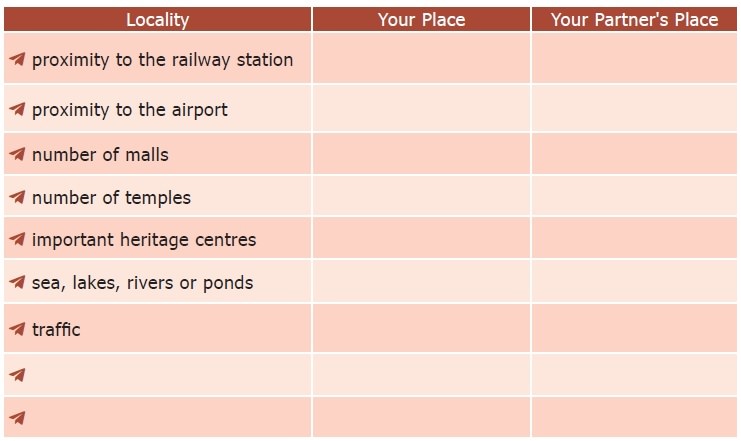 B. Give your opinion and compare the items in each picture using -er, more, less, or an irregular form. Use the words. You may form your sentences in more than one way. D. *Listen to the conversation between Leena and her mother and list down a few new words. Using a dictionary find out the meaning for those words. 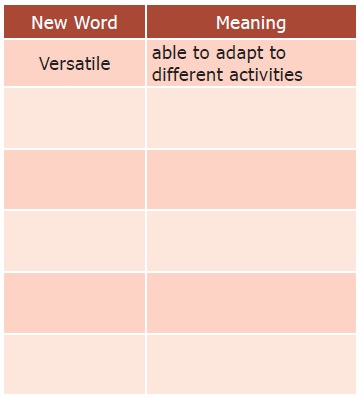 The class will be divided into groups of five. Each one of you will get a topic to speak on, which will be related to the theme of the unit. A preparation time of one minute will be given. Then, you have to speak for one minute continuously. The teacher will ring the bell to signal the end of a minute. Next person in the team will take over.

The challenges of the one minute speech are to speak without

F. Work with a partner.Match the words and pictures by writing the numbers in the space provided.Use an encyclopedia to find out more about these adventure sports. 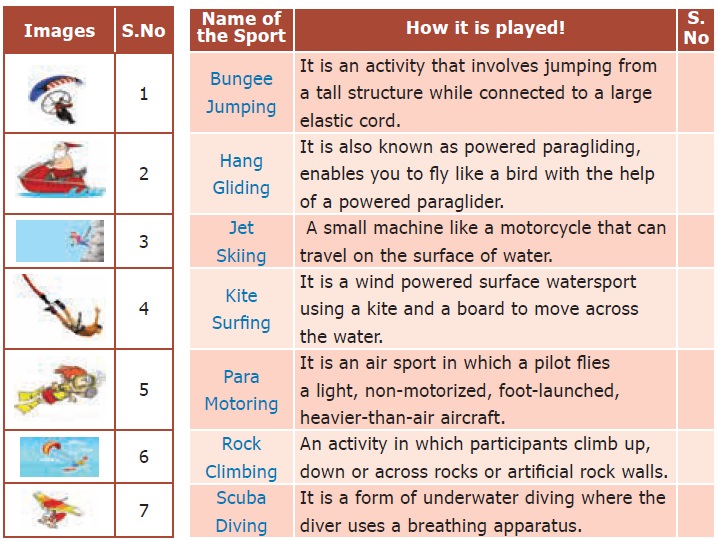 Now, read this hilarious anecdote from the life of a journalist and enjoy.

1. In 1977, Mr .Nicholas Scotti,a journalist from San Francisco,fl ew from America to Italy to visit some cousins.The plane stopped for an hour in JFK Airport in New York. Mr Scotti thought he was at Rome Airport and got off the plane. Of course his cousins were not there to meet him.

2. Mr. Scotti spent two days in New york believing he was in Rome. In their letters his cousins always talked about the traffic problems and the famous building in Rome. Mr Scotti decided to find their home without their help.On his journey round the city,Mr Scotti asked a policeman to tell him the way to the bus station .Mr Scotti asked him in Italian .Luckily, the policeman was an Italian from Naples, Italy and could reply in the same language.

3. On the next day, after 12 hours of travelling round by buses, Mr Scotti was surprised that the policemen and drivers speak in English. A policeman tried to tell him that he was in New york, but Mr Scotti didn’t believe it and even got angry.

G. Complete the following table with information from the anecdote about Mr Scotti’s short trip.

1. In New York Mr Scotti left the plane because he thought he

2. He decided to find his cousins’ home without their help. He asked the policeman for information in Italian because he

Finite verbs change tense and number according to the subject.

Her friends presented the girl with a toy.

His friend presented a watch.

1. Walking is a healthy habit(Present participle used as a noun)

2. I like to walk early in the morning. (to infinitive)

3. These are my walking shoes.(Present participle used as an adjective)

4. Having walked a long distence I felt tired

J. Look at the action words in bold. Identify whether they are either finite or non-finite verb.

The infinitive is often called a ‘to verb’ 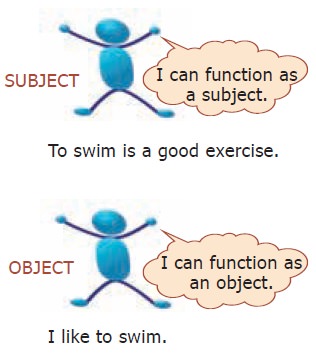 Eg. She made me do my project.

We use plain/bare infinitives with these modals.

The infinitive may function as a subject, direct object, subject complement, adjective, or adverb in a sentence. Although an infinitive is easy to locate because of the to+verb form, deciding what function it has in a sentence depends on the meaning.

·        To wait seemed foolish when decisive action was required.(subject)

·        The  study  abroad  program  might satisfy your desire for new experiences.

·        The police arrested him for criminal activity.

Dinesh and Deepa have been assigned homework on non finites.They are not sure when to use a gerund and when to use an infinitive. They decide to meet their teacher and get their doubts cleared. The teacher introduces them to Mr.Gerund and Ms.Infinitive.

L. You may role-play the conversation.

I come after a Preposition too.

Mr.Gerund comes in handy to describe a real action.

Hello friends, I am Infinitive. Words such as ‘like’, ‘refuse’ are followed by me.

I know you. I take your help to describe a general or future action.

(I think I need to get up early tomorrow to complete my grammar exercise.)

You have helped me to express ‘reason’, ’intention’,’ purpose’.

(I wish to finish my assigment by tonight.)

But remember we mean different things when used after ‘stop’.

Divya,When we saw Rajesh at the mall, I stopped to talk to him.Why didn’t you wait?

Don’t you know I stopped talking to him?

M. Now, work in pairs and help Dinesh and Divya complete the exercise given below.

Where are the astronauts headed to?

1. Write the gerund/infi nitive form of the verbs in the blanks.

We’re on our way!

Which planet are the astronauts heading to fi rst? Add the infi nitives.